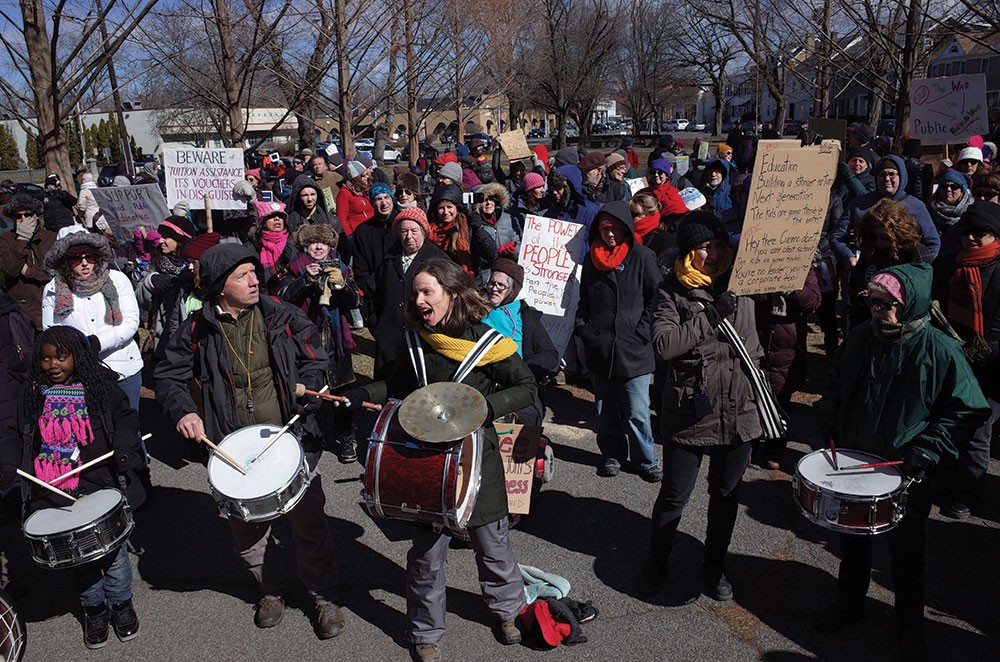 It's a Saturday afternoon in Kingston's Academy Green Park, the occasion of the statewide People's March for Education Justice. Several hundred of us are here to voice our outrage over recently appointed US Secretary of Education Betsy DeVos's dreams of school privatization Governor Cuomo's withholding of state educational funding, and other threats facing public schools. The sun is out and the sky is blue, but it's insanely cold—the lacerating wind makes it feel like it's in the teens, at most. And yet as we contemplate the heavy matters at hand and begin our trudge, the mood is somehow light. Ebullient, even. There's an extra spring in our steps. The source of this paradoxical, highly contagious mood? Local activist marching band Tin Horn Uprising, whose clarion brass, thumping drums, crashing cymbals, and chants form an irresistible magnet that pulls the attention—and in many cases the physical presences—of even casual onlookers into this river of united humanity as it courses down Broadway.

"Everyone loves a marching band, right?" asks trumpeter Scott Langley, 40, a social rights advocate by day and one of the troupe's founding members. "Whenever a marching band comes through a town, people come out of their houses and poke their heads out their windows to watch and listen. So the noise gets attention, and that draws people to the message. At political events, music turns what might otherwise be a stale or boring gathering into a fun time. Besides being an outlet for the actual musicians, who themselves might be dealing with some of the troublesome issues being addressed, music makes people dance and sing. It lifts the spirits."

Tin Horn Uprising has been doing such spirit lifting since mid-January, when the band made its raucous debut during a pro-Affordable Care Act rally at New York Representative John Faso's Kingston office; next that month would come appearances in Poughkeepsie and Hudson during the Women's March, followed by an ongoing stream of other rallies, marches, and actions. With a changeable core of approximately 40 members and an on-call e-mail list of nearly 75 applicant musicians, Tin Horn's muster includes professional as well as amateur players of widely varied backgrounds and walks of life, from preteens to retirees; their live appearances average between 20 and 30 members.

The name, explains founder and tuba player Adam Katzman, a 35-year-old solar energy specialist, comes from the Tin Horn Rebellion of 1839, during which Hudson Valley farmers organized against the deeded patroonship system that controlled land rights. Kicking off the Anti-Rent Movement, the rebellion saw tenant farmers blowing their tin dinner horns to alert each other whenever they were besieged by their would-be evictors. "We're facing different threats today, of course," says Katzman, who previously found his activist-street-band calling with Brooklyn's Rude Mechanical Orchestra. "But besides the historical reference, the band name also alludes to people using horns as a call to action. It's cool to be sort of picking up that torch."

The modern brass marching band format can be traced at least as far back as the Turkish military bands of the 11th century; in the early 18th century, wind instrument-dominated harmoniemusik ensembles started in Austria and Germany and the construct soon spread to England and the rest of Europe, whose warring nations came to rely on such groupings to boost morale and signal troop movements on the battlefield. Between wars, community bands, often made up of volunteers, were maintained by civic and fraternal organizations to perform for town celebrations and other public events. In America, marching bands became common as well; during the late 19th/early 20th century, Washington, DC-born bandleader and composer John Philip Sousa was an international star and the musicians in the original New Orleans brass bands that begat jazz played castoff Civil War instruments. Colleges and high schools formed marching bands to rally the fans at football games, a martial concept that in the last two decades has been subverted by the formation of street bands like Tin Horn and their better-known peers the Hungry March Band (Brooklyn), the Extra Action Marching Band (Oakland, California), and What Cheer? Brigade (Providence, Rhode Island), many of whom perform on behalf of radical causes at demonstrations and similar events. Such outfits often draw on rock, hip-hop, and other styles and sometimes augment their marching musicians with dancers, baton twirlers, and additional performers. Besides appearing at protests and the like, many of them compete annually at the HONK! Festival in Somerville, Massachusetts, and acknowledge their roots in the revolutionary bands of the early 20th-century European left-wing and union movements via renditions of related standards like "The Internationale" and the Italian partisan/anti-fascist anthem "Bella Ciao."

It was the outcome of the 2016 presidential election that spurred the formation of Tin Horn Uprising in December. "Adam and I had had a vision of putting together a radical street band in the Hudson Valley before then, but the aftermath of the election definitely became the real impetus," says Langley, who played trumpet nonprofessionally in high school and college. The call went out and the burgeoning unit began to steadily swell with a roster of players—several on trumpets and saxophones, plus French horns, trombones, and other brass pieces as well as drums, tambourines, bells, and sundry hand percussion instruments—who rehearse an average of twice a month at Kingston's Unitarian Universalist Congregation of the Catskills and sometimes rewrite the lyrics of the their repertoire based on the theme of whatever upcoming action they're marching at.

"[Joining the band] seemed like a constructive use of my energy and abilities, and those were things I wanted to bring to the ongoing protest," says Meghan Quinn, 33, an accordionist who teaches high school English in Hyde Park and, fittingly, led the band (on bass drum) at the education-oriented demonstration in Kingston. "The mood is always positive when we play, it's energizing and upbeat. What we're trying to do is amplify the message of the protests, rather than be the focus of them. That's why we made a conscious decision not to use megaphones, which could compete with any of the speakers who might also be there. We're always looking for more musicians to join us, but right now we're more in need of other kinds of volunteers—especially dancers and banner wavers."

The reactions to Tin Horn's joyful noise among their fellow demonstrators have been loudly appreciative. "When they showed up to the Stand with Planned Parenthood demonstration in Poughkeepsie," says Liz Wassell, a longtime Planned Parenthood supporter and NARAL lobbyist who attended the January event, "it felt like the best, most fun kind of cavalry had arrived." For many who were there, the band's spontaneous performance of the national anthem when a bald eagle suddenly appeared in the sky above February's Not My President's Day rally in New Paltz was the most moving moment of that heady gathering.

While the resistance continues to surge and adapt to the Trump administration and its regressive policies, so does Tin Horn Uprising in its membership, responses, repertoire, and goals. "We've been just seeing where it goes," says Katzman. "One thing we've been looking at is the idea of having 'satellite' lineups that rehearse in other areas of the Hudson Valley, like in Albany or Poughkeepsie. As it is, we already have people who drive in from places that are an hour away to play, so that could be something that really works out well. But whatever happens, we'll all see how things evolve together." 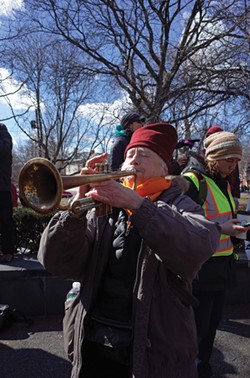 For some of their future recruits, however, the band may not have to look farther than the family rec room. "I have three kids," says Langley. "And lately, almost every night, my two-year-old has been asking me to sing 'Bella Ciao' at bed time."