Rails to the Catskills 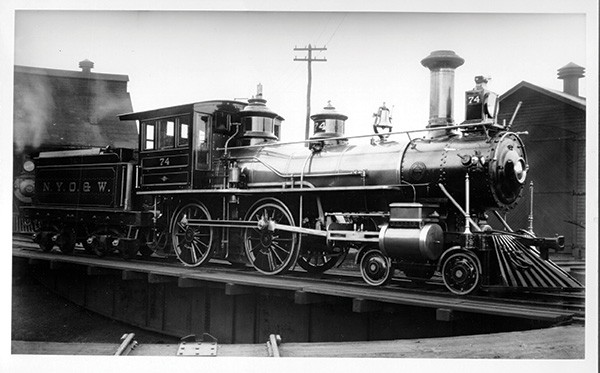 If you live in or have visited the Hudson Valley, you've probably at least heard of its rail trails, if not explored them for yourself. Running from Poughkeepsie across the Walkway over the Hudson and up through the valley into the Catskills, these paths bring the area immense recreational and aesthetic appeal. But how many of us have stopped to wonder about the "rail" in rail trail, to contemplate the old stone mile markers that still stand sentinel along these paths, or to ask why the trains that used to trundle through these woodland tunnels aren't still here today?

For the curious among us, documentary filmmaker Tobe Carey has spent over two years resurrecting the intricate history of these locomotives. Rails to the Catskills chronicles the rise and fall of major regional railroads, like the New York, Ontario, & Western and the Ulster & Delaware Railways, bringing to light their immense cultural and economic impact on the towns that sprang up around them. Carey layers vintage film, contemporary video, animated maps, and photographs with local folk tunes to create an engrossing viewing experience. The documentary will premiere at Mountain Cinema in Hunter on June 1.

"I hope to introduce audiences to the history of an incredibly important and somewhat forgotten part of our region's life," says Carey regarding his ambitions for the film. "There are a lot of people who are fascinated with trains, and I hope this enriches their understanding of the role these railroads played in the Catskills." While obviously appealing to train buffs, the documentary also speaks to the everyday resident, especially in its coverage of the recent legal debate surrounding what remains of the Catskill Mountain Railroad. Chartered as a tourist operation in 1983, the volunteer-run railroad has been appealing to Ulster County for permission to repair abandoned tracks between Phoenicia and Kingston into an extended line along the Ashokan Reservoir, but townships are calling for the corridor to be converted into a walking trail. Discussions of a trail-with-rail solution are ongoing, and contentious discussions spring up on the comments boards of local newspapers whenever stories are posted about the issue.

This debate turned what would otherwise have been a special-interest piece on 19th- and 20th-century railroads into a history lesson with contemporary relevance. "It seemed like the long history of railroads in the historic Ulster and Delaware corridor was threatened," says Carey. "Today it may difficult to understand the revolution that railroads brought to commerce and travel, but having a dependable, fast, all-weather means of transportation when the alternative was dirt roads and long, uncomfortable trips was a change of enormous magnitude." For many, the Catskill Mountain Railroad commemorates this technological revolution, and Rails to the Catskills, itself an act of historic preservation, exemplifies what we stand to gain from remembering the past.

Carey has been shooting documentaries for over 40 years, and the Hudson Valley remains one of his most prolific subjects. Indian Point: Nowhere to Run (2003) and The Hudson River PCB Story: A Toxic Heritage (c. 1998) take a political stand against some of the region's most infamous environmental threats. Most recently, in 2012, he released Sweet Violets, a foray into the Rhinebeck's bygone flower industry; and in 2010 he completed Catskill Mountain House and the World Around, the subject of which makes a welcome guest appearance in Rails.

Carey says that people had been pressing him to make a film on railroads for years before he finally took them up on the idea. "I knew that railroads were a big and complicated topic," he explains. "Without the help of generous local historians, collectors, historical societies, and libraries, this film couldn't have been made."

Rails to the Catskills will premiere on June 1 and June 8 at 4 pm at the Mountain Cinema in Hunter, followed by a discussion with filmmaker Carey. Seating is limited, so reservations are strongly encouraged. Mths.org; Documentaryworld.com.

Rhinebeck: Violet Capital of the World