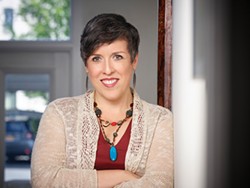 Kingston-based nonprofit TMI Project was founded in 2010 with the honorable mission of "offering transformative true storytelling workshops and live storytelling performances to underserved communities." Over the course of several months, storytellers workshop monologues, bringing to light the "TMI" parts of their stories, the parts they usually leave out because of shame or embarrassment. These workshops culminate in an evening of live performances. Over the next four months, we will be featuring monologues from TMI Project's archives in Chronogram. To kick things off, we sat down with the organization's cofounder and executive director, Eva Tenuto.

TMI Project's annual benefit, Voices in Action, will take place on September 21 at BSP Kingston, with a cocktail hour at 7pm and the show at 8pm. Tmiproject.org

Ten years ago you started TMI Project. What was the original idea, and why was storytelling the mechanism?

ET: It started a bit unintentionally. I had been hired to direct "The Vagina Monologues" for a local organization's benefit in 2008 and 2009. It was really successful. In 2010, they asked me to do it again, but I had worked with pretty much the same cast of women both years, and I knew they had their own stories—some had written memoirs and tucked them away, some had solo shows. So I asked if I could curate a lineup of our own stories. And they took a chance.

When we did that first production, there was a response that I had never seen. People felt really honored to be in the audience—and they could see themselves in the performers. It also had this contagious truth-telling ripple effect. I just instinctively knew we had to keep going.

Since 2010, TMI Project has held 90 workshops and worked with 1,750 storytellers. Performances have been held in school auditoriums, detention centers, and mental health facilities. Were you also finding storytellers in these communities?

Yes. We've been doing ongoing work with the Mental Health Association (MHA) of Ulster County. We hold two 10-week workshops a year through them. We also created a documentary called Vicarious Resilience, which shows the kind of transformation that takes place from the moment someone walks through the door to the moment they step off stage. What always strikes me is that it's a population that we so often hear other people talk about, but I'd never heard someone with paranoid schizophrenia talk about their own experience.

We also worked at the Highland Residential Center with incarcerated teen boys. They contracted us to come in, and it was the hardest work that we've done to date. They are the most abandoned population I've ever worked with—no guidance, no support working through things.

TMI Project's annual benefit, Voices in Action, is coming up on September 21. What can attendees expect?

We have a storytelling showcase that highlights storytellers from the previous year's programs. This year we will have a participant from a program we did with RUPCO at the Lace Mill. We'll feature a storytellers from LifeLines: Queer Stories of Survival, a program we did with the Trevor Project that brought people from all over the country. We are in production for our first-ever podcast series, and we are going to debut audio to the audience. We'll have some musical surprises. There is also a cocktail hour with food and drinks. Almost every performance we do other than this is free and open to the public. This is our one major fundraising event to fuel programming for the following year.

As part of the benefit, TMI honors local agents of change. This year you are recognizing Jeff Rindler, Executive Director of the Hudson Valley LGBTQ Community Center; artist Ubaka Hill; RUPCO; and Secret City founder Chris Wells. How do these individuals and institutions reflect the mission of TMI?

Jeff has really changed the culture and accessibility of the LGBTQ Community Center and has been so supportive of the work we're doing with that community. Ubaka has been using drumming as a form of activism and vehicle for connection for years. We've been partnering with RUPCO for a couple of years now, and they are really interested in helping us create stories about housing insecurity. Chris is a phenomenal storyteller in his own right, and he is using art and storytelling as a way to unite people.

Past initiatives have included race, gender, mental health, and the LGBTQ community. How does TMI Project come up with ideas and partnerships for new initiatives?

We just did a program with Kingston High School football team. The way patriarchy has impacted boys and men is as serious in some ways as how it has impacted women and girls. It is really important to teach our methodology to boys to help them have coping skills and a new way to communicate. They can't do it on their own.

Aside from the housing initiative, what else is TMI Project working on?

We're teaching a true storytelling workshop for women at Omega Institute in September. We have another MHA workshop series starting in September, we are releasing our documentary Locker Room Talk this fall, we'll be part of Black History Month in Kingston next year, and our first podcast series will launch in December or January.