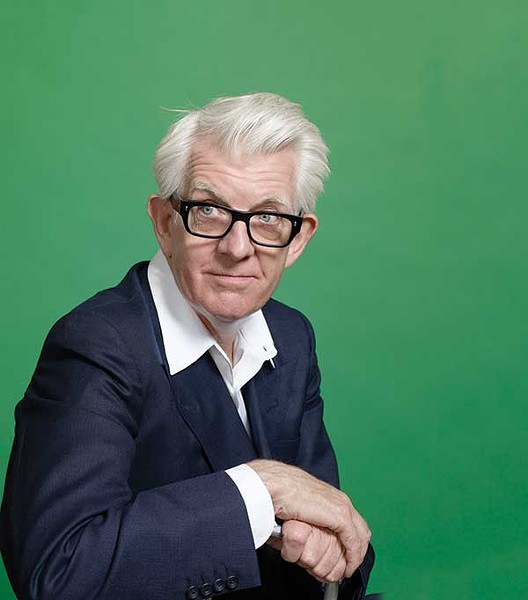 To those who see Nick Lowe as one of the leading lights of the sleek, hippie-rejecting new wave revolution of the late 1970s but don't know his background, it may be a surprise that one of the quintessential British power popper's greatest early inspirations was the act that defined the freewheeling, dirt-farming sound of the Woodstock era: The Band. "When [1969's] Music from Big Pink came out, it was just so completely different from everything else at the time," says Lowe, who will headline Club Helsinki in Hudson on August 21. "When The Band played Wembley Stadium in 1974, they rehearsed at the farm we were all living on. We were just in awe. They left some empty bottles of Grand Marnier behind—which we saved on a shelf, as a shrine."

The "we" Lowe is talking about is the band Brinsley Schwarz. A country-and-R&B-tinged group, Brinsley Schwarz was named for its lead guitarist (a future member, along with keyboardist Bob Andrews, of Graham Parker and the Rumour) and featured Lowe on bass and lead vocals and Ian Gomm (1979's "Hold On") on guitar and vocals. The outfit cut the original version of "(What's So Funny 'Bout) Peace, Love, and Understanding," later a hit for Elvis Costello, and helped foment the early '70s pub rock movement, a back-to-the-roots rock 'n' roll scene that paved the way for British punk.

And when punk began blowing up, Lowe was one of its prime movers. His pounding 1976 single "So It Goes" b/w "Heart of the City" was the first release by the seminal Stiff Records, and as a producer he worked on discs by such early label signings as the Damned, Costello, and Wreckless Eric, as well as those by non-Stiff acts like the Pretenders.

Lowe's solo debut, 1978's Jesus of Cool (retitled Pure Pop for Now People for the timid American market), was followed by 1979's Labor of Lust, which harbors his biggest hit, the bittersweetly rollicking "Cruel to Be Kind." Concurrent with the making of those classic albums, he and singer-guitarist Dave Edmunds co-led the quartet Rockpile, whose sole studio set, 1980's Seconds of Pleasure, sold strongly thanks to the infectious single "Teacher, Teacher." Since making his name with this winning trifecta, Lowe has continued to craft superb records that are increasingly colored by his love of classic pop and country; recent standouts include 1994's The Impossible Bird, 2001's The Convincer, and 2011's The Old Magic.

One might say the latter's title squarely nails Lowe's long-held methodology: that of his timeless, if-it-ain't-broke-don't-fix-it approach. But does Lowe ever yearn to try something more experimental? "Funny, I was just talking to Elvis Costello about that when we played Hyde Park last week," says Lowe. "I suppose I should sometime. But I guess I've always just tried to write songs that sound good with either a full band or just an acoustic guitar. Songs that will stand up, no matter what."

Nick Lowe will perform at Club Helsinki in Hudson on August 21. Kim Richey opens. Doors are at 8pm. Tickets are $45.