by Sierra Flach and Marie Doyon 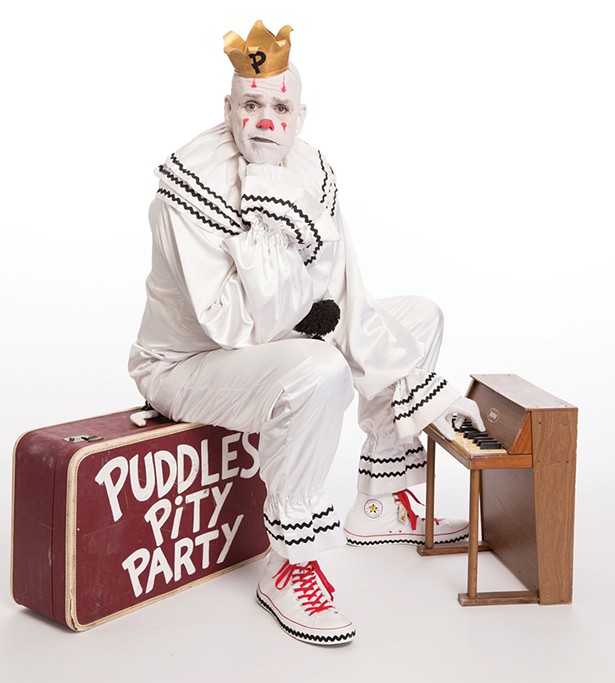 While Puddles Pity Party achieved fame via the most quintessentially modern platform—Youtube—the character has its roots in the centuries-old literary archetype of Pierrot—the sad clown with the painted face, who wears a loose white blouse and pantaloons. The stock character was a cornerstone of pantomime and commedia dell'arte dating as far back as Moliere's "Dom Juan." A melancholy, heartbroken, even pitiable character, Pierrot also managed to wield a strange and captivating power over audiences—a legacy which Puddles furthers, with his full-bodied baritone and melodramatic performances.
Looming large at 6'8", the man behind the costume, “Big Mike” Geier is has an impressive stage presence. In the early '90s, Geier led a touring "Swing Noir" band, The Useless Playboys, and in 1995 he settled in Atlanta, where he formed the band Kingsized, and later developed the character Puddles, the sad silent clown.

After years of building a following with smaller gigs and internet videos, Geier hit gold in 2013 when his character Puddles teamed up with Postmodern Jukebox for a cover of the Lorde song “Royals.” The glum clown went viral and proceeded to record a medley of entrancing covers of pop songs like David Bowie’s “Space Oddity,” and Leonard Cohen’s “Hallelujah,” with his Youtube views skyrocketing from the hundreds into the millions.
Puddles Pity Party has performed at Fringe festivals all over the world as well as at La Soiree’s 2014 Southbank show in London, which won the Olivier Award; and the 2015 Festival Supreme. In 2017, he brought down the house on "America's Got Talent" with his cover of Sia's "Chandelier."


With a global fanbase, Puddles is on tour again crooning in full face paint for thousands of fans (not to mention 400K Youtube subscribers). The sad clown with the golden throat brings his repertoire of captivating and melodramatic covers to Bardavon in Poughkeepsie this Sunday, November 18 at 7pm.

For anyone still unconvinced about buying tickets for a singing clown, The New York Times
wrote of Puddles, “His special effect is a textured voice laced with melancholy…what makes him transcend the trope is his vulnerability.” Puddles utilizes but does not rely on gags and it shows. One of the toughest singing critics in the business, Simon Cowell, has called the show “fantastically brilliant…originality at its best.”