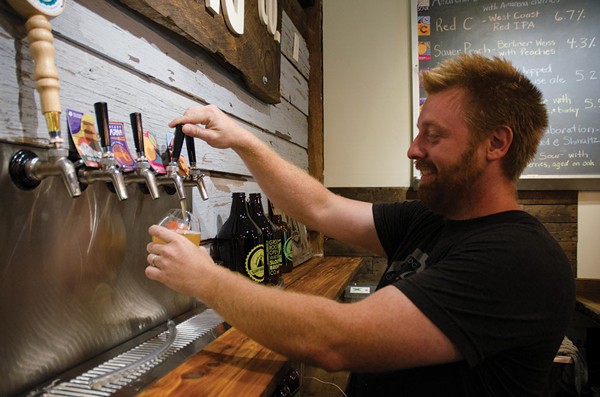 These are five great examples of sour beers being brewed in the area, but there are certainly some excellent sours not on this list and more great ones on the way. Last year, Kent Falls Brewing Co., a farmhouse brewery in Kent, Connecticut, opened and started offering a variety of wild-yeast-powered, lightly sour beers. Later this year, Suarez Family Brewery will open outside Hudson. This brewery will specialize in mixed fermentation, and owner/brewer Dan Suarez is an alum of legendary Vermont brewery Hill Farmstead.

Named for the crossing at the Berlin Wall, this beer is brewed in the style of the Berliner Weisses made in Berlin. It has a light body with a tart finish and bright, refreshing flavors. Perfect for a new sour-beer drinker or any drinker looking for a light, easy-drinking beer.

Brewed with wheat, corn, and Brettanomyces ("Brett") this excellent brew has garnered accolades from the New York Times and many others. It has a light finish with a quick mouthfeel that doesn't linger on the tongue as long as some other sours. It makes for great summer drinking but also works as a year-round option.

This black sour ale brewed with raspberries and aged in oak is a step up in terms of sour intensity from your standard Berliner Weisse, thanks to the boldness of the raspberry flavor. But it's still a brew with a nice balance, and only a hint of wild-ale funk—it won't leave your eyes watering from the acidity.

Just glancing at its biblically inspired name and no-joke 9 percent alcohol content lets you know this beer means business. Aged in oak in a blend of whisky barrels and wine barrels, it has a darker character with strong (and yes, tart) raspberry flavors powered by the approximately 25 to 30 pounds of raspberries that are used for each barrel of beer.

One of the more intense tasting sours from Captain Lawrence, this beer took home the Great American Beer Festival Gold Medal in the American, or German-style sour category in 2007. Made with muscat grapes, it has a particularly wine-like quality with a fruity, acidic flavor and aromas of apples and honey.