June 28, 2010
Last Updated: 08/13/2013 4:31 pm
comment
At Vassar College, when the tests and papers are finally done, “Pomp and Circumstance” marches out the graduating class, and the last student overstuffs her car and drives away, it’s time for the theater people to emerge. For the past quarter century, Vassar and New York Stage and Film have combined forces to present Powerhouse Theater, an artistic laboratory for both aspiring and established playwrights, directors, and actors. For an eight-week summer residency, approximately 250 intensely creative people converge on Vassar’s campus to produce as many as 20 different works for their test subjects, a largely Hudson Valley audience. As Academy Award-winning screenwriter and Powerhouse regular John Patrick Shanley (Moonstruck) says, “The audience is genius. They know everything and you just have to listen to them.”

Since 1985, over 2,000 artists have participated in the program, resulting in plays like “Tru” by Jay Presson Allen, “Debutante Ball” by Beth Henley, and “Necessary Targets” by Eve Ensler. The residency has hosted directors like Jo Bonney and Mark Brokaw and actors such as Olympia Dukakis, Philip Seymour Hoffman, and Frances McDormand. Ed Cheetham, Powerhouse’s producing director says, “We have a great return of people who are just excited to be here, and that’s really key. That makes me thrilled every summer.”

Part of Powerhouse’s recipe for success is the variety of performances—mainstage productions: fully staged works-in-progress; Martel musicals: concert readings of works-in-progress; Inside Look: semistaged workshops; performances by the Apprentice Company; and two free Readings Festivals. Talk-back sessions follow the mainstage productions, providing formal feedback for writers and directors. Cheetham says, “There are a lot of subscribers, people who have been coming here for years and years, and they feel free to tell you exactly what they think.”

John Patrick Shanley’s “Pirate, ” introduced as a reading last year, will be a mainstage production this season. According to Shanley, “Pirate” is “about a very bad man; sometimes, he looks one way, sometimes he looks another, but he is always bad.” In true Powerhouse fashion, debuting on the same stage as the world-famous Shanley is up-and-comer Tracy Thorne. Her play “We Are Here” tells the story of multiple generations in a tight-knit, mixed-race family examining life after the youngest family member dies.

The Martel musicals will feature the Lerner and Lane classic, “On a Clear Day You Can See Forever,” directed by Tony Award-winner Michael Mayer. Justin Levine’s “Bonfire Night,” based on the Gunpowder Plot of 1605, when Guy Fawkes and his English Catholic followers conspired to blow up the House of Parliament, will also be staged.

“Sam Bendrix at the Bon Soir” by Keith Bunin, “A Long and Happy Life” by Bekah Brunstetter, “My Life with Men—And Other Animals” by Maria Cassi and Patrick Pacheco, and “Interviewing the Audience” by Zach Helm will round out the Inside Look series. “Interviewing the Audience” will play out as the title describes. Cheetham says Helm specifically wanted to develop this project with the Powerhouse audience and he’s just as curious as anyone to hear what questions Helm will ask.

This season’s Readings Festivals will feature 10 new works, including “The Rest of Your Life” by Meagan Mostyn-Brown, “I Am An Emotional Creature: The Secret Life of Girls around the World” by Eve Ensler, and Richard Nelson and Pete Golub’s “Unfinished Piece for a Piano Player.”

This year’s Apprentice Company will be putting on “Machinal” by Sophie Treadwell, “Romeo and Juliet” by William Shakespeare, and “1940s Radio Hour” by Walton Jones. Cheetham says, “You really don’t know what’s going to happen other than you have to trust that it will happen. We ask a lot of them and I’m always amazed at the amount of work they can do and the openness with which they approach that work.” His goal for the students: “I want them to leave here with more questions, asking themselves what they can do as artists, human beings, and citizens of the world.” 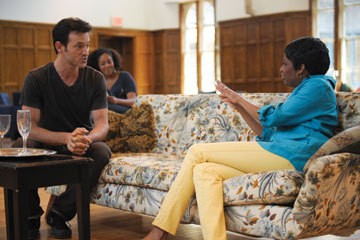