How did your parents meet?"

"Throwing their blood on the pillars of the Pentagon to protest US funding of the Colombian military."

That's an exchange three-year-old Keira and six-year-old Sasha, of Ghent, will have with their friends someday. Their parents, Sheila Stumph and Scott Langley, first laid eyes on each other at a 2002 protest, and were arrested together. Scott later proposed in a note sent through the bars of the Alexandria, Virginia, jail.

The Langleys eventually welcomed Sasha and Keira, but rather than slack off protesting, they've kept pressure on the government, albeit in less dramatic form. Like many couples, parenthood amplified their desire to stand up and speak out, but unlike most, they decided to make it a family affair; these days, they align with the Catholic Worker Movement, opposing the Guantánamo Bay detention center and the death penalty, and they always bring the kids to demonstrations.

For the Langleys and other area families, activism is an integral part of teaching kids about their connection to the rest of the world, an opportunity to enable offspring to see beyond their bubble and feel engaged. Fortunately—or unfortunately—opportunities abound to join protests in the Hudson Valley and the Capital Region, and regardless of detractors who question whether it's "a place for a child," families are packing up, raising fists, and making a ruckus.

"As soon as you become a parent," Sheila Stumph says, "all you want to do is protect your child, at any cost. But at the same time, you open up to this universal connection to all parents. You want to withdraw, but at the same time you feel you have so much more of an awesome responsibility. When we stand outside the White House, protesting Guantánamo, we tell the girls, 'Obama can see us. He sees that we don't agree with this policy, we want to go on record, so the men in Guantánamo, and their families, can know someone cares."

Boiceville's Christina Himberger, a devoted member of Catskill Mountainkeeper, which advocates for sustainable development and natural resource protection, feels similarly. "I work against fracking for my kids," she says. "But I also do it for everybody else's kids, [Dick] Cheney's grandchildren. It's important for everybody." She recently took 13-year-old daughter Grace and 14-year-old son Milo (and some friends) to an antifracking rally in Albany, a first-time experience for the family. "Over 2,500 people [including Natalie Merchant and Debra Winger] showed," she says, "so my kids thought, 'Okay, Mom's not crazy, she's not the only one who thinks about this.' Plus, it gave them a much broader perspective on the issue. And I thought they were at a level of maturity where they could get important things out of it, and not just see it through me. When it comes to the environment, climate change, water rights, food security, corporate responsibility—these are areas they're going to be dealing with in their lifetimes." 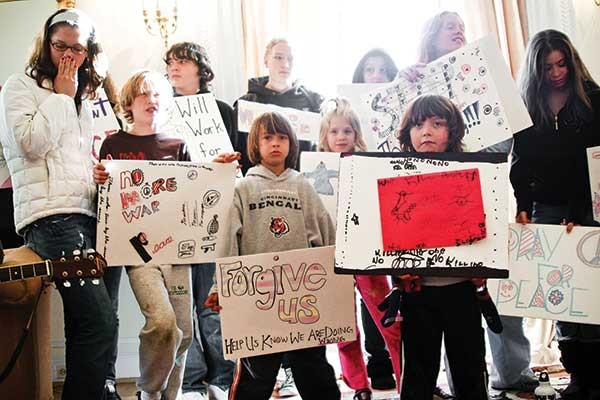 New Paltz singer-songwriter Tim Hunter had curtailed protesting since becoming a father of four, but a recent anti-Monsanto march at New Paltz's Peace Park seemed the perfect opportunity to introduce his kids Wynne, eight, Theo, six, Moses, five, and Beatrice, four, to dissent. "We're pretty serious about Monsanto," he says. "We're vegetarians, and we grow our own vegetables. At the Peace Park I got a chance to play my song about Monsanto's corn seed, a growth-modified organism they won't test on human beings. It's called 'Bad Seed': 'He was a bad, bad seed / Corrupting the other weeds / And he was born of greed / Everyone agreed he was a bad bad seed.' It was the first time my kids saw me play in public."

"It was a peaceful protest," he says. "No angry chants. The kids loved it, and sang along with everybody. It's a good way for them to know it's disturbing to me that merely for profit we'd be toying with the machinery of creation, with as-yet-untold consequences. It's a ridiculous bargain." Does he think his kids understand the gist of his concern? "Your specific protest doesn't matter," he asserts. "All you want is for your kids to see you taking positive action. And they need to see you enjoying it, having a good time."

Enjoying the process of activism is important to all of these parents because, frankly, Monsanto's GMOs continue infiltrating the food supply, the fracking threat persists (in the Hudson Valley and elsewhere), Guantánamo remains open, and executions continue.

Scott Langley knows he's signed up for a long road with his family, with potentially no payoff in his lifetime. But, like the Himbergers and the Hunters, he takes the long view. "Last night," he says, "there was a stay of execution for a mentally disabled man on death row in Georgia. We celebrated. It was an opportunity to say to the kids, 'This is an example of something that worked, a small victory.' That's the 'bigger picture' approach. My main hope is, our daughters develop a sense of compassion for the world and all the different people in it, no matter where those people live, the color of their skin, or what they've done."

"We're not just working for the world we want," says Stumph, "we are actively creating the world we want. We want our kids to feel capable of making change, but we also raise them to yearn for change."

"They have to see it's a process," Tim says. "It's a journey, not a destination; a process, not an outcome. We're in such a pabulum moment in human culture; reality TV, instant gratification, people don't want to think long term because they're afraid for their future. They just want something instantly gratifying. We have no TV in the house, and I take the kids to community-supported-agriculture farms, where people are doing good things, building a good world around themselves."

Christina Himberger realizes she's just at the beginning, too. "Fracking is still not my kids' issue," she says, "but part of my goal is to let them know I expect them to educate themselves on issues, to look at both sides, as I did when I went alone to hearings in Albany; I heard environmentalists, energy company lobbyists, chamber of commerce members, realtors, all testifying to the environmental committee. It wasn't subjective. I've tried to convey that they need to figure out where they stand as human beings. And if sowing these seeds makes them think beyond themselves, that's good."