How Far Away Are We From 3D Printing Organs? | Medical | Hudson Valley | Chronogram Magazine

How Far Away Are We From 3D Printing Organs?

Leading Experts Weigh In on the Possibilities

Brent Chanin has always been a tinkerer. After studying mechanical engineering in college and working briefly as a scuba diver in underwater archaeology, he started a consulting company pitched toward helping inventors take their ideas "from a paper napkin to the real world."

One day, a radiologist from NYU Langone approached Chanin: He had figured out how to turn medical imagery into 3D computer renderings, but he wanted help turning those digital drawings into 3D-printed models that you could hold in your hand. It was a challenge right up Chanin's alley, and the two partnered for a few years, banging out patient-specific plastic organs on 3D printers and bringing the models to surgeons to see how the technology might help their work.

"It became very clear that this was powerful," says Chanin. "The first time it really clicked for me was when we gave a neurosurgeon a 3D-printed model of a young boy's skull. The boy had outgrown a spinal implant supporting his neck, and it was time for a replacement. When we handed the doctor the model, he immediately said, 'Well, I'm not going to do what I was planning on doing.' The speed at which he came to that conclusion, having the model in his hands for just a few seconds—that's when it really struck me that this technology could powerfully change the way patient care is delivered and specialized."

That was about five years ago, and Chanin is now the CEO and CTO of Mediprint, a Chester-based company that creates patient-specific 3D-printed medical models based on diagnostic scans from CT, MRI, ultrasound, PET, and other imaging data. Mediprint makes models for various uses from patient education, medical training, and surgery planning to sizing and placing stents and other devices.

To produce its models, Mediprint often partners with the Hudson Valley Advanced Manufacturing Center (HVAMC) at SUNY New Paltz, one of the most advanced 3D printing facilities in the country. "You can practice a surgery [on a flexible model] as many times as you like before you ever have the patient on the table. You can even put fluid through the model if you want to do vascular simulations," he says. "This could eliminate the need for exploratory surgeries."

Chanin is part of a new generation of engineers, doctors, and researchers—some of them right here in the Hudson Valley—who are looking to 3D printing for a range of medical applications. Yet he is also thinking beyond mere models and toward the living, growing future of medicine. For some people, that future is about human tissue engineering. That's why Chanin is now CEO of a second company, Organofab Technologies, dedicated to this next step, which is really more of a quantum leap for science.

"[Organofab is] probably the most exciting thing that I'm working on and it's essentially the same process that we've been doing, just using different materials and tweaking the technology," Chanin says. "It's 3D printing human cells."

When Cells Are Your Ink

The idea of "bioprinting" human tissues and organs has been around for a few years, and some researchers and entrepreneurs are pouring their efforts into what seems like a far-out yet promising notion. The implications are mind-blowing, because if we print individualized organs from our own cells, we can solve many problems in the fields of organ transplantation and regenerative medicine. Gone will be the problem of donor-kidney shortages (there are currently about 96,000 Americans on a kidney donor waitlist, and 13 people with kidney failure die every day waiting for an organ). We could also avoid immunosuppressive drugs, because the body would have no reason to reject tissues made from its own cells.

Researchers like Dr. Anthony Atala and his team at Wake Forest University have had success already with similar regenerative medicine techniques for the bladder—and they are now using 3D technology to print a prototype kidney that they're studying experimentally.

Imagine using an ink-jet printer in a lab, but instead of ink, cells come out, and the end result is an organ. Dr. Atala is also tackling wound repair with the concept of a mobile skin bioprinter—a bedside printer filled with a patient's own skin cells that could lay them down directly on top of a wound or burn to revolutionize the healing process.

"The idea is that an organ is basically just a bunch of different cells arranged in a very particular way. If you can get all of those cells in the right place with a matrix that will support their growth, then in theory—I'm no biologist—but you might be able to recreate an organ or recreate something that could function as an organ." tweet this

Although the science is making progress, it still has a way to go. "Printing a replacement kidney hasn't happened yet and probably won't for a long time," says Daniel Freedman, director of HVAMC and dean of SUNY New Paltz's School of Science and Engineering. "There are a lot of people working on printing live cells. The idea is that an organ is basically just a bunch of different cells arranged in a very particular way. If you can get all of those cells in the right place with a matrix that will support their growth, then in theory—I'm no biologist—but you might be able to recreate an organ or recreate something that could function as an organ. People have had some success with 3D printing live cells and getting them to grow afterwards."

To get from printing living cells to bioengineering an organ, several obstacles stand in the way—and few people know about those obstacles as intimately as Dr. Faiz Bhora. To accept the role of the new chief of thoracic surgery at Vassar Brothers Medical Center in Poughkeepsie, Bhora moved upriver this spring after 14 years at Mount Sinai Hospital in Manhattan, where he built a reputation as a leader in robotic thoracic surgery and also started working on a translational-research side project—3D printing a human trachea. 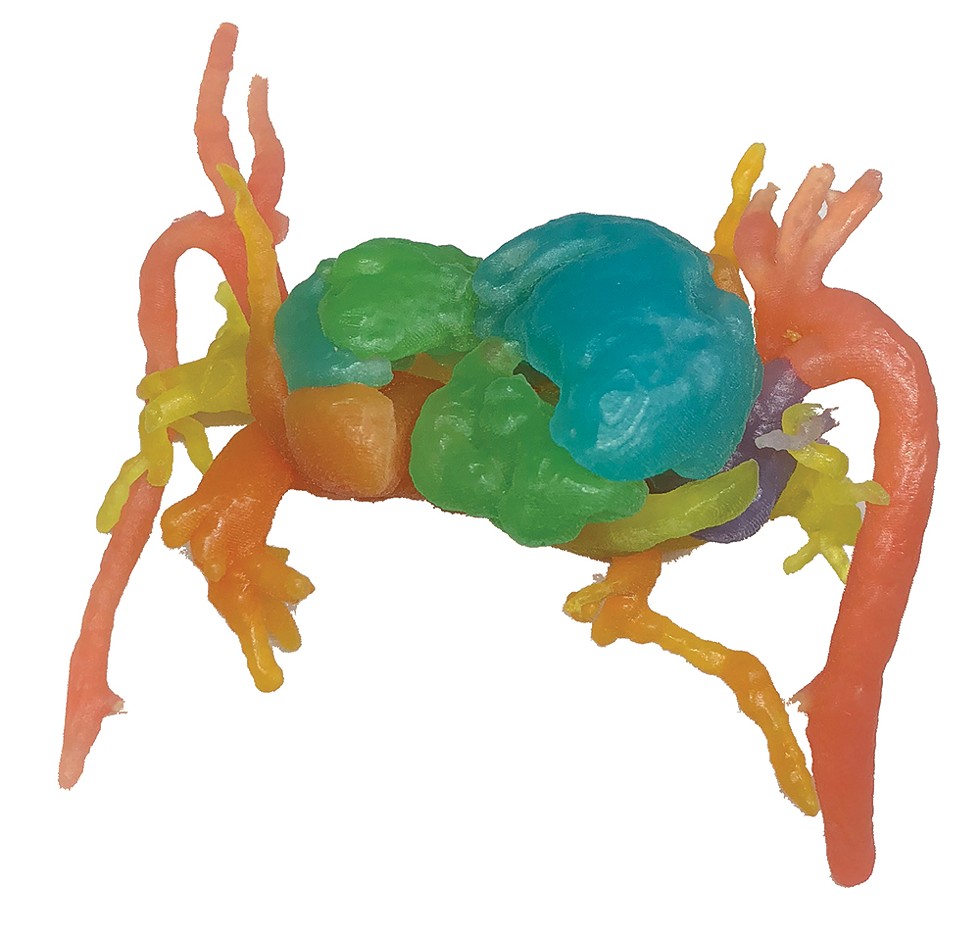 Along with Vassar Brothers' creation of a new residency program and medical school, opening in 2020, and a $545-million hospital expansion, Bhora and his team are part of a fresh wave of innovation in the region. And their goal is nothing less than to become the first doctors in the world to implant a 3D-printed, bioengineered trachea in a human patient within a few years.

"As far as I know, we are the only group that is looking to build a trachea from biological materials," says Bhora. The process involves first printing a scaffold for the trachea out of a bioplastic called polycaprolactone (PCL), which takes only about 15 minutes on a Fab@Home 3D printer. The scaffold is the easy part—next comes lining it with a matrix made out of collagen and then seeding that matrix with stem cells from the patient. "We will potentially use cell homing techniques to cellularize these grafts," says Bhora, explaining that when the graft is surgically implanted, it will tap into the body's own process of drawing stem cells to the tissue, a natural occurrence called cell homing.

Related Vassar Brothers Medical Center: The Wave of the Future

Dr. Bhora and his team have tested many aspects of the bioengineered tissue in the laboratory and have implanted about 20 to 25 tracheal grafts in pigs. Along the way, they've published and presented their research nationally and internationally. "We're the first to say that we still do not have the perfect graft," he says. "This is a complex, difficult problem that needs a fair amount of work until it's ready for prime time and for human use."

"This is a complex, difficult problem that needs a fair amount of work until it's ready for prime time and for human use." tweet this

Nonetheless, Bhora's goal is to have a clinical trial in humans in about two years, driven by need because there are no other solutions. "At the moment, there is no substitute for the trachea if it is diseased for more than four or five centimeters in length," he explains. Transplant is not an option for a variety of reasons, and patients who lose their trachea face permanent tracheostomy, the creation of an opening to bypass the defect. The patient breathes through that opening and loses the ability to speak; swallowing becomes difficult and tracheostomy maintenance is also challenging.

A bioengineered trachea would be life-changing for people who need it, but several obstacles stand in the way. "Blood supply to the trachea is not very defined, so vascularization of the graft becomes difficult," says Bhora. "The trachea is also exposed to outside air and bacteria, so the risk of infection is high whenever you do operations on the trachea. Another issue is scar tissue. The trachea is sensitive to injury, and [post-surgery], it will form granulation or scar tissue, which tends to then make the trachea narrower."

There is a lot of work to be done, but if Dr. Bhora and his team can get over hurdles like these, they might help find a path forward for other 3D-printed and bioengineered organs in the future. "I think we can say that we are one of the leading labs in the world that is looking at this," he says. "We have made substantial progress toward achieving a workable tracheal graft, and in the process, we have expanded our knowledge as to what works and what doesn't work."

From Practical to Pie-in-the-Sky

While bioprinting has kinks to work out, there is still a lot that the medical field can do with 3D printing technology here and now. "The biomedical side of printing live cells is still very high-end research and has to be done through a medical school or bioengineering program," explains Freedman from SUNY New Paltz. "At the Center, we're focused on very practical things." Since around 2013, HVAMC has served a dual purpose of supporting the university's academic programs and partnering with local companies to help stimulate economic growth for the region.

They charge for their services but only what they need to keep the operation going. Recent grants from the Dyson Foundation and Central Hudson allowed HVAMC to expand and purchase more high-end printers, including a 3D printer for metal (they're one of the first academic labs in the Northeast to have one), a continuous-build printer in beta phase (one of only about 10 in the US), and a polyjet 3D printer, which prints a liquid resin that cures into a solid material in a full range of colors. 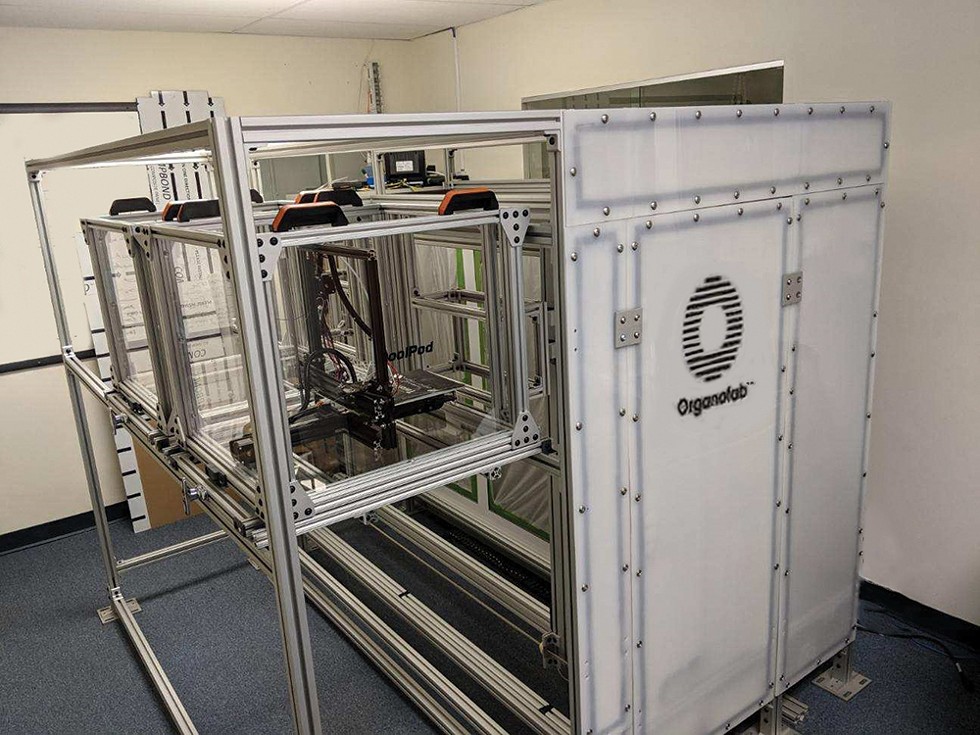 "We work with quite a few [medical] entrepreneurs, and we've done a bit of design work for medical devices," says Freedman. "That's been limited, and I'm hoping that with the new metal printer we can do more with devices, because 3D printing is used very heavily in that area." Meanwhile, the polyjet printer is a game-changer for entrepreneurs like Chanin, who can use it to print model organs in full color or with transparency. HVAMC's machines have churned out hearts, lungs, and even a life-size spinal column, which took about 48 hours to print.

For his Organofab venture, Chanin and his collaborators have a machine of their own in alpha phase. "We're creating essentially a box where you can put in a patient's cells on one side, and out the other side is going to come your organ to be implanted, or your tissues or cellular therapies." After developing the prototype for about two years, they are now beginning to approach researchers with it as a new tool for tissue regeneration. "We're just on the cusp," he says. "This is all experimental but really exciting."

The original print version of this article was titled:
"Print Me An Organ"