June 26, 2008
Last Updated: 08/13/2013 4:40 pm
comment
Tatana Kellner is the artistic director of the Women’s Studio Workshop in Rosendale. Her own work ranges from printmaking and photography to artist’s books and installations, focusing on subjects drawn from her personal history and reflection on contemporary events.

Born in Czechoslovakia, Kellner and her family fled Prague when Russian tanks rolled into the city in August 1968. When she arrived in Lima, Ohio, she initially sufferwed from intense culture shock, but she ultimately enrolled in art school, where she first studied painting, and printmaking. She eventually moved to Rosendale after graduate school in the early 1970s and founded the Women’s Studio Workshop with Ann Kalmbach and Anita Wetzel, in 1973.

Kellner’s reflections on topics ranging from the Holocaust (her parents are both survivors) to 9/11 strike a balance between the largeness of the events and the intimacy of a personal engagement, often emphasizing the materials she works with, and the processes to which they have been subjected. Her most recent installation, Iron, looks at the history of women’s domestic labor, printed screened photographs of antique irons, on the backs of crisp white shirts in invisible ink. The images are revealed by the heat of an electric iron, also part of the installation. This work is on display through September 7 at the Samuel Dorsky Museum of Art, part of its summer show of regional artists. Portfolio: www.tatanakellner.com.

TATANA KELLNER ON HER WORK

Mass and Multiplicity
It’s the printmaker in me—I’ve always liked working in multiples. I find pattern and repetition interesting, and also mass. How do you obtain some kind of substantiality out of that?

I went to school in the ‘70s, when they didn’t teach you anything. It was all about the business of art, or you could do anything because it was conceptual art. I was in painting, and decided I wasn’t learning anything in that class, so I figured that in printmaking at least I would learn a skill. I went to graduate school for painting, but the teachers there weren’t that good either, so I moved back into printmaking. The idea of multiples of things are not so precious, and make the work more affordable—all those elements are important issues for me.

I have this love-hate relationship with the multiple. Obviously, I like the idea of having the multiple, I like the processes, but at the same time, the repetition [of making them] becomes tedious. When it’s something like an installation, it’s different. It involves a lot of research, and solving problems, which can get frustrating on the other side. My working methods and my work are about that sort of dichotomy. I want things to be slightly mysterious, not completely defined. That’s why I don’t do straight photography. Don’t get me wrong, I love to see that sort of thing, but it’s not for me, not my work—it’s too defined.


Working process
I’m a very process-oriented person; that’s how it usually starts. With the 9/11 piece, I had this idea to work with long banners. I always liked transparency, but I could never figure out how to use it in my work. I was thinking about all the photographs, all the posters people put up, looking for people from the World Trade Center. For this piece, it seemed to be about mass, heaviness, and sadness. So I decided to print it on organza, which is sheer. [The work involved screening hundreds of photographs of 9/11 victims on the banners.] Then it turned into something that was 16 feet tall, and I was going to need hundreds and hundreds of yards of this fabric. I wasn’t sure how I was going to do it, either physically or financially. But it worked when I got to put it together for the CEPA Gallery in Buffalo, which showed it on the first anniversary of 9/11.

Research and development
The Dorsky piece—I started it last year, when I was invited to be in an exhibition called Reimagining the Distaff Toolkit. Ricky Salinger’s premise is about what happens to objects used in drudgery, for domestic labor, and how they become aestheticized as they become obsolete. Ironing came to mind, which is something I never do. But they wouldn’t allow the heat to be on—I was really upset because the whole idea was about the invisibility of this kind of labor (which is revealed when the invisible ink is heated by the iron). We did a video [of the process], but in the installation we needed to have the writing visible on the ironing board.

I had to figure out how to make the invisible ink, which took a long time. It took so long, I decided to make an artist’s book to accompany the piece. In order to read the book, you need to iron the pages to make the printing appear. I like the whole idea of working with things that surprise the viewer somehow. Normally you would use lemon juice, but I had to wait to see if it would work as the show traveled, and that after three months if it would still work. But lemon juice is too runny, so I tried yogurt, and that worked for the first two weeks, and then it stopped working because after the bacteria died, it wasn’t acidic anymore. So I just kept doing research online, and I came across baking soda…it’s the opposite, it’s alkaline (instead of acid, like the yogurt), but at least it wasn’t runny to use on the printing plates. It’s a very simple formula. I don’t know how long it’s going to work, but it works now at least. It’s a risk.

Building an alternative space
Back in the ‘70s, you didn’t worry about working nine to five. If you wanted an alternative, you went out and did what you wanted to do, in many fields, not just in art. But slowly and surely through the ‘80s, things have changed with yuppiedom. Now alternatives are all trying the same model. It’s an outrage.

Ann (Kalmbach) went to school at New Paltz, along with Anita (Wetzel). Their teacher was Ken Burge, who eventually got us this job—a half-time, part-time job (as a tech in the art studios) at SUNY New Paltz. We shared this part-time job, and needed studio space, and I needed a press to do printmaking now that we were all out of grad school. Then Anita wrote a grant for the NY State Council on the Arts, for $2,400. And we got it, in 1974. When they came to visit us [to follow up on the grant], they said “You have to do something, you can’t just use the money for yourself!” So we started on James Street in Rosendale in this little house, and began offering some classes to supplement our half-time, part-time job—that’s how we started.


The ‘F’ Word
The perception [of the Women’s Studio Workshop as a feminist organization] is something we’ve struggled with forever. When we started, we were seen as housewives with aprons. That tells you, “We’ve come a long way baby.” [Laughs] It’s interesting because it was never strictly a feminist idea—we’re women-centered, but not everybody is a feminist, not everybody is comfortable with that label. We struggle with the question of renaming the organization, and the conclusion is that we should keep it, because it’s important for many artists who expect and need that kind of atmosphere. WSW is about noncompetitiveness, it’s about cooperation, and being in a supportive environment. I think we need more places like that. Because it’s competitive to be selected to come here, once you come in, you’ve got your stamp of approval, and whatever you do, it will be supported. Lots of other places have this jockeying for power. If anybody ever does that here, they don’t do it for too long, because there’s just no response. There’s no reinforcement for that, for namedropping, stuff like that. We’re trying to set up an alternative to all of that, to all the ego-playing. When you come here, you can just leave all that at the door. It’s about your work, not about all that other stuff. 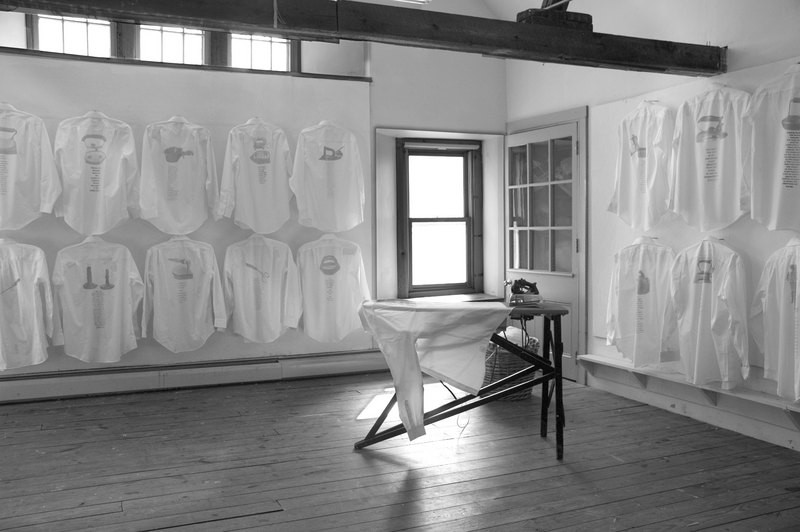