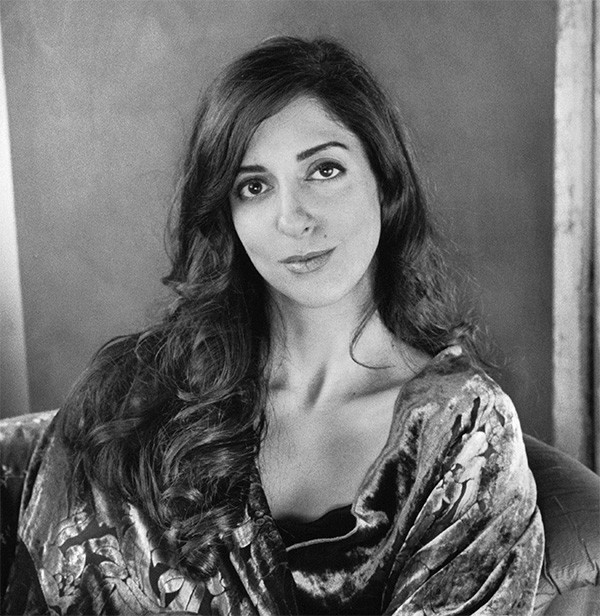 Some interviewees take a while to warm up, like a car in cold weather. Porochista Khakpour takes off like a hummingbird.

Scarves and skirt swirling, she bursts into Bard's Shafer Hall, apologizing profusely for being a minute late. By the time we reach Red Hook— a five-minute drive—she's talked about Shafer's eccentric design (there's a moat), the Written Arts Program's faculty "dream team," her recent appointment as visiting writer in residence, her other teaching gig at Wesleyan, commuting by Zipcar and train, conversations with cabbies, Manhattan apartments, dog walking, her struggles with Lyme disease, Obamacare, and more. We've laughed like old friends. "Off the record" is not on the table.

And before she's even finished reading the menu at Bread & Bottle, she's spinning a riveting tale of her stint as a "document mule" for Al Jazeera America, flying to LA to pick up a thumb drive containing the diaries of a high-profile Guantánamo detainee. (The Snowden/NSA story had just broken, she explains, and her editor didn't trust encryption. So he recruited Khakpour to meet journalist Jason Leopold in a cafè and slip the drive into her purse.) "It was like a spy movie," she says as a waiter appears. She orders carrot-ginger soup, barely pausing for breath.

True, Khakpour needs to be back on campus in an hour for a student conference, but her high-octane friendliness and dazzling swoops from subject to subject seem to be more about temperament than time pressure. Dark-eyed and slim, she gives an impression of constant motion; it's no surprise to learn that she's hypoglycemic and has trouble sleeping. At 37, she's taught at a dozen colleges, written features and essays for the New York Times, the Los Angeles Times, Harper's, Spin, Slate, Salon, Poets & Writers, and the Daily Beast, among others, and published two remarkable novels.

Khakpour's debut, Sons and Other Flammable Objects (Grove/Atlantic, 2007), won a California Book Award; The Last Illusion (Bloomsbury, 2014) earned glowing reviews and a bouquet of quotes from Claire Messud and other notables for its audacious fusion of magic realism, dark humor, and Persian myth.

Zal is born in an Iranian village, the albino son of a demented woman who cages him in an aviary for a decade. Adopted by a doting New York psychologist, the "Bird Boy" struggles to learn human behavior. Aching for normalcy, Zal reaches adulthood on the cusp of Y2K, crossing paths with an outsider artist, her angelic obese sister, and a celebrity illusionist determined to make the World Trade Center vanish. The intricate narrative spirals outward to comment on imagination itself:

"His mind ran away with glorious possibility: that darkly glittering will of the cosmos conjuring through some magical combo of, say, blood, guts, sun, sky, and spirit—and isn't that how every human being is made anyway? he tried to argue, with whom he did not know. Isn't that how every story is created?"

Khakpour dips a spoon into her soup, exposing a tattoo above her wrist; she has six. "My students are obsessed with them," she says, sounding rueful. "I tell them there are more important things than tattoos." She's teaching beginning and intermediate writing workshops at Bard, mostly freshmen and sophomores. "I love getting them young. Their imaginations are still wild and crazy­— they're not loaded down yet with boring advice. They're still kind of pure."

At Wesleyan, she teaches creative nonfiction, which she calls "my daily work. I'm never not writing an essay on something." She's currently finishing a long piece for Harper's about eccentric billionaire Forest Fenn, who claims to have hidden a treasure chest full of gold coins in the mountains near Santa Fe. "I'm attracted to larger-than-life things, and when you're that person, those things tend to find you," Khakpour says. "I tell students they need to live, not just write and read."

Born in Tehran in 1978, she started writing novels in elementary school. Life had given her ample material: Her earliest memories are of the Iran-Iraq War, "air raids and anti aircraft fire, standing outside a bomb shelter. When I got to the US, I would panic at anything in the air—hot air balloons, helicopters. I was like this wartime kid."

Her younger brother was born in South Pasadena. "My childhood was the transition between cultures," Khakpour explains. "My parents were really upper-middle-class—no, just upper-class, the 1 percent of Iran. They lost everything. So my brother and I grew up being poor and scrappy, but our mother was crying about not going shopping for winter clothes in Milan anymore."

Gone to the Dogs: The Nebca Herding Trials