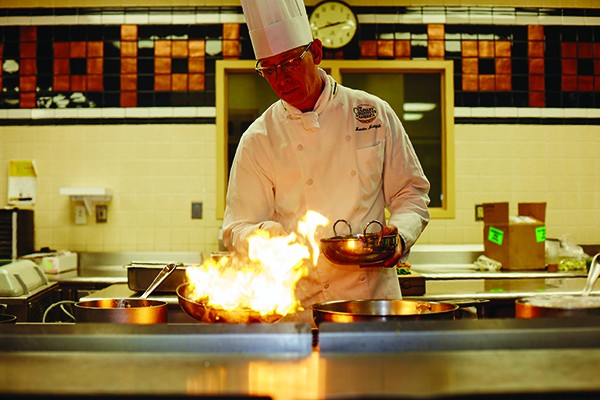 Pop-ups and food trucks have become integral to the latest wave of American cuisine, and two events in the Hudson Valley—one just passed and one to come—illustrate just how important this rough-and-ready, run-and-gun restauranteering is to (new) New American food and the way we eat now. Despite their similarities—both pop-ups feature bold flavors, CIA-trained chefs, and friendly price points—they are as different as soul food and sushi.

In early December, Elephant—the much-loved tapas and wine bar in Kingston—generously let Michael Pardus and Brian Donahoe take over on Sunday night to roll out their first attempt at Lucky Mee, a noodle shop. Donahoe was a student of Pardus's at CIA 10 years ago, and after graduation they stayed in touch as friends, regularly discussing the possibility of doing something together, and what it might be. The noodle shop is something that Pardus has been thinking about for six years. This seems excessive, perhaps, until you start talking to him about the broth. "The whole concept is based around the broth," says Pardus. "I would stack our broth up against anyone's." By using bits of meat less used by cooks—chicken feet, for instance—and getting maximum extraction of flavor, they end up with a broth that is low in fat, with a rich, collagen mouth feel. "You taste this broth plain and it will make your lips come together," says Pardus, clearly joyful and proud.

The team isn't chasing the obsessives, such as Ivan Ramen and Momofuku, but rather envisioning a noodle shop for the masses. The pop-up played the dual role of putting them through their paces and attracting investors for the project. "We have potential investors, but they wanted to see it live," said Pardus. "I wanted to take it to the next level of conversation. There's still room, especially for investors with a sense of urgency." "We're seeing a lot of this food in first-year cities," says Donahoe. When you get out of the trendsetting areas, you find yourself in what they are calling a noodle desert. "We're trying to bring it to a regional market, and ultimately nationwide."

I suppose I might have scoffed at the idea of a noodle desert had I not just driven through one. I was smiling for every minute of the hour-plus ride from Cold Spring to Kingston, knowing that there would be noodles when I got there. Others seemed to agree: 120 covers in Kingston on Sunday, and in New Paltz, at the Cafeteria Coffee House, 140 diners showed up (on a cold Monday night, I'll remind you) to slurp through Lucky Mee's take on five noodle soups.

They served soups in Japanese, Chinese, Thai, Malaysian, and Vietnamese styles. Four of the five soups use the same mother broth, hinted and flavored in different ways: katsuobushi (dried, fermented, smoked skipjack tuna) flavors the Japanese broth, while hoisin spikes the Chinese. The fifth broth is "almost vegan," says Pardus with a chuckle. The Malaysian soup is based on a broth of shiitake mushroom stock and coconut milk. It's spiked with fish sauce, hence the "almost," but he's working on vegan alternatives to bring the umami depth.

My table had a fine time passing around all five bowls (as well as some fresh spring rolls, a late addition to the menu). The light portions of pork belly and thinly sliced beef were bite size and nicely done, the noodles fresh and toothsome. The broth was restorative and fulfilling. The bamboo soup spoons didn't make it very far—a few slurps and they started to flatten out. But that's why you start with a pop-up: to learn what's what. "We ironed out a few of the kinks right away," said Pardus. Donahoe echoed him: "Lessons learned on Sunday were in place on Monday." "It was so much easier," said Pardus. Some of it was, anyway: When they got to Cafeteria to set up, not long before they were to open, Pardus said: "We plugged in our induction burners and blew every fuse in the house. Everything else was so tight, we had the time to figure out what went wrong."

The two got about 12 hours of sleep each between Thursday and Monday. "Doable, but not sustainable," said Pardus. Lucky for us they plan to do it again. "I'd like to do something with Bruce at Main Street Catering; he let us use his kitchen as a commissary."

Our second story comes from the campus of the CIA itself, where a new restaurant, Pangea, is about to open in a student dining hall. Waldy Malouf, the senior director of special projects, said that the idea was reflective of what is happening in the food world. "In Michelin Star restaurants, food was fussy, plated. Now they want real food." Malouf says Pangea will reflect the trends toward bolder flavors "from around the world, flavors and techniques from Southeast Asia, from India, Africa, from our own traditions. There will be more vegetables, more grains. It's not a vegetarian restaurant—well, maybe it is, but you'd never know it."

Dinner at Pangea will consist of five courses, and each course will come with a family-style plate for the table to share. Malouf insists it's not a 10-course, four-hour tasting menu. "We want to reach out to a demographic that will enjoy it." The CIA doesn't only want to keep current in the educating of its students—they'd like to refresh and recharge the people who come there to eat. For while there is excellent stuff going on, and lots of it is approachable, there is no denying that the main restaurants on the Hyde Park campus are fancy, and that as you approach the gates, you wonder if someone is going to ask who your father is and whether or not you're a member. Malouf hopes that Pangea will help to change all that.

The price of dinner certainly will help: Diners will get all five courses for $29. The place itself, Malouf promises, is going to look unlike anything else at the Culinary. He worked with the set director and the art director of the Half Moon Theater group to put the space together, and the students raided the attic to appoint the room. "People have been putting stuff up there for 80 years," said Malouf.

"What is the future of dining?" asked Malouf. "How does it affect the environment, people's health, the community?" These are things that the culinary world is thinking about, and things that Malouf hopes Pangea will address. Clearly, if you're educating people to participate in the future of dining, you need to teach them how to run an improvisational restaurant—what we've come to call a pop-up. At some point during our conversation, I asked Malouf what a pop-up really is. What makes it different from a guest chef? A takeover? Catering? "It's a useful term," said Malouf. "It lowers the expectations."

I don't know if I agree wholly—people get jazzed for pop-ups, they breed excitement—but I know what he means. He means that if the soup spoons fall apart before you've finished your delicious bowl of noodles, you'll forgive it.

Watch for the next iteration of Lucky Mee by following them on Twitter @luckymeenoodles and on Facebook. Pangea opens in January and will operate until May. Make reservations at their website (you need a ticket): Pangeany.com.