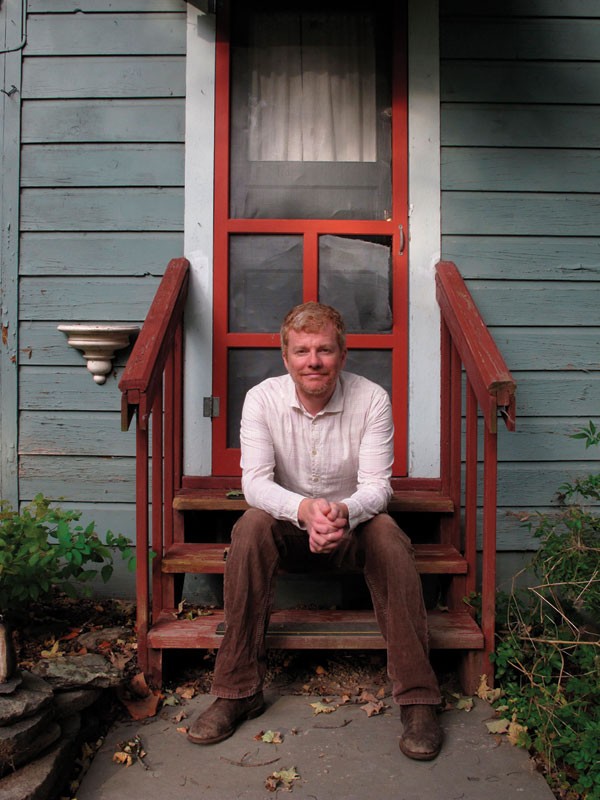 Pop music has always been the great paradox. By design it’s about creating hooks, melodies, and lyrical couplets that have wide appeal, a sumptuous sum of addictive parts that will keep the listener returning for more. But, as Spinal Tap’s ever-sage David St. Hubbins once posited, there’s a fine line between stupid and clever. Despite the idiom’s built-in, easy-to-understand attraction, it’s not easy making truly great, long-lasting pop—music that will sound good to many but, unlike its fluffier, more disposable variants, will also stand the test of time. It’s the difference between, say, Big Star and Big Time Rush. Those adept at crafting music that’s intelligent and astonishing as much as it is ear candy are rare; consummate auteurs to be valued equally alongside their peers in the so-called “serious” fields of contemporary classical or the challenging avant-garde. And one of the current generation’s reigning pop geniuses is Carl Newman, who, as the leader of indie super group the New Pornographers and as the solo artist A. C. Newman, is responsible for some of the most inspiringly enduring sounds since the glory years of the 1960s. It may be surprising, however, to learn that some of the songs that influenced the Woodstock transplant’s acclaimed, artful music are among those relegated to the throwaway bin by rock historians.

“I’ve always had this love of melody,” says Newman, 44. “I was big on classic rock when I was a kid—the Beatles, the Stones, Kiss, Cheap Trick. But at the same time I loved ’70s AM radio songs like [Bo Donaldson and the Heywoods’] ‘Billy, Don’t Be a Hero’ and [Paper Lace’s] ‘The Night Chicago Died.’ And I’m a sucker for ’80s stuff like Toto and REO Speedwagon’s High Infidelity, even though I rebelled against that music at the time. Now I find myself hearing it on the radio, looking back, and going, ‘Man, people wrote songs back then!’” Whether or not you agree with him on the compositional knack of Kevin Cronin and company, it’s hard to argue with the creative sensibility behind durable modern masterpieces like the New Pornographers’ Mass Romantic and Electric Version and Newman’s The Slow Wonder and just-released Shut Down the Streets (all Matador Records).

Newman hails from White Rock, a beach town just outside Vancouver, British Columbia. “Nobody in my family played any instruments,” the singer says. “My parents were mostly into country, but I learned a lot about rock from my older brother. He leant me stuff like Talking Heads, Changes by David Bowie, [the Sex Pistols’] Never Mind the Bollocks. I really became obsessed with music when I was 15 or 16, which got me to pick up the guitar when I was about 18. In high school I hung out with the new wavers, not only because I liked the music, but also because I thought it was cool they didn’t give a shit what anyone else thought about them. For music, Vancouver’s had two periods when it was really good: in the late ’60s, with garage and psychedelic stuff like the Painted Ship and the Collectors, and in the early ’80s, with all of these great punk bands—DOA, the Subhumans, the Pointed Sticks. When SPIN reviewed [New Pornographers debut] Mass Romantic, they said it was the best record from Vancouver since the Pointed Sticks. That gave me a deep sense of civic pride.”

It was through the coastal Canadian city’s punk scene that Newman joined his first band, the self-described “prog-grunge” outfit Superconductor. With an unwieldy lineup of two bassists, one drummer, and Newman and five other guitarists, the early ’90s band toured hard and released two albums to modest success. “I became the singer really just because no one else [in the band] was interested,” Newman recalls. “We were kind of a ham-fisted version of the first couple of Pixies albums, I guess. It was really noisy, but I couldn’t help but sneak some melodies in here and there.” The melodies came further to the fore during the latter phase of Superconductor’s existence, when Newman co-founded the decidedly pop-classicist Zumpano. Recalling the softer, more sophisticated sounds of the Zombies, Squeeze, the Beach Boys, and Burt Bacharach, the quartet (named not for Anthony Quinn’s character in Fellini’s La Strada, but for the group’s drummer, Jason Zumpano) signed with Seattle’s Sub-Pop Records in 1994, helping usher in the label’s move away from the grunge sound it had established in the ’80s and into the lighter pop direction of acts like the Shins and Fleet Foxes. Zumpano released two critically well-received albums for the imprint, 1995’s Look What the Rookie Did and 1996’s Goin’ Through Changes, before the band drifted apart.

The mighty juggernaut that is the New Pornographers—Newman and his fellow Vancouverites Neko Case (vocals), Destroyer’s Dan Bejar (guitar, vocals) and Fisher Rose (drums), the Evaporators’ John Collins (bass), and Blaine Thurier (synthesizers)—began in 1998, rather inauspiciously. “We’d all been talking about starting a project together for so long that no one we told about it thought we’d ever actually do it,” explains Newman. “They were all, like, ‘Yeah, yeah, yeah, whatever. You guys keep talking about this band you’re gonna start, blah blah blah.’ So we had the idea before we ever got together to play, and we felt like we kind of had to deliver after a certain point. We came up with the name [a reference to Akiyuko Nosaka’s 1966 film The Pornographers] and after that we made a four-song demo, which we felt really good about. But when we sent it out to labels, none of them gave a shit.”

Almost none, that is. One that did was Canada’s Mint Records, which issued Mass Romantic, featuring new drummer Kurt Dahle (Limblifter, Age of Electric) and guitarist Todd Fancey, in 2000. A spirit-lifting burst of ’60s sunshine harmonies, slashing power pop guitars, and swirling, Day-Glo keyboards, the disc displays a fully formed act that not only had its rock history and songwriting chops down cold, but somehow manages the elusive trick of making the music familiar yet unexpected. Although the debut initially didn’t chart high, it ended up winning a Juno Award for Alternative Album of the Year and got critics in a giddy tizzy—and was no doubt helped along by Case’s concurrently exploding career as an alt-country solo artist. By the time of 2001’s South by Southwest festival, the New Pornographers were the toast of indiedom; such was their status as the new keepers of the classic pop flame that Ray Davies himself joined them on stage at the convention to perform—quite appropriately, one would imagine—the Kinks’ “Starstruck.” Newman calls the band’s arrival “amazing,” adding, “Really, I was just happy we were able to sell out [small Manhattan venue] Brownie’s. That would’ve been enough for me.” New York’s powerhouse Matador Records, home to such indie giants as Pavement, Guided by Voices, Sonic Youth, Yo La Tengo, and Cat Power, soon stepped in, co-releasing with Mint the 2003 follow-up, Electric Version. Another rocking trip through Candy Land, the set showed the band perfecting and streamlining its craft to an ever sharper, shinier edge; the record’s crunching wall of sound is highlighted by such treats as the crashing peaks of “The Laws Have Changed” and the gutsy, sugar-snap bounce of “The New Face of Zero and One.” Since then, the sucrose high has continued unabated, with the band steadily becoming a bigger live draw and releasing three more enthusiastically reviewed full-lengths, 2005’s Twin Cinema, 2007’s Challengers, and 2010’s Together (the latter was heralded locally with a raucous tour stop at the Bearsville Theater).

After doing their time in Brooklyn, Newman and his wife, former Matador marketing director Christy Simpson, bought a place in Woodstock and moved up in April 2009. “We didn’t intend to be here full-time, but it worked out that way—which has been great,” the songwriter says. “I’m amazed at how much I’ve come to like the solitude. [The couple’s wooded lot] feels like our own forest. It turned out [folk legend] Happy Traum is my next-door neighbor, and it’s been really great, getting to know him. I was afraid I might feel like a fish out of water, but I just keep meeting more and more cool local musicians.” (Newman recently recorded a version of Happy & Artie Traum’s “Jacksboro,” which he plans to release online.) Among the hip local players Newman’s met are Saugerties keyboard whiz Marco Benevento and Mike Merenda and Ruth Ungar (aka Hurley folk duo Mike & Ruthy), all of whom perform on Shut Down the Streets, Newman’s third Matador solo offering after 2004’s The Slow Wonder and 2009’s Get Guilty. Although it features appearances by Case and several cuts that recall the New Pornographers’ luminous bombast (see the roaring “Encyclopedia of Classic Takedowns”), Shut Down the Streets is, comparatively speaking, a much more personal record. The composer says the turn was largely brought on by his becoming a father and the recent passing of his mother. It’s these emotion-packed, creatively fertile developments that permeate powerful standouts like “Strings,” a hushed, tinkling greeting to his newborn son Stellan, and the sweetly sad title track, a reflection on loss ornamented with Case’s heart-tugging choirgirl vocals.

“[Newman] has an incredible intuition for writing unique, likable songs,” says Merenda about the album, which was recorded at his own Humble Abode Studio and at Catskill’s Old Soul Studios. “At first listen they come across as catchy, straight-forward pop songs. But as I started playing these songs and coming up with parts, I realized that each song had a rather unassuming sophistication: a sneaky undercurrent, a quirky arrangement, a surprise chord sequence, a genius turn of phrase.”

Newman’s presently gearing up to take those genius turns on the road in support of Shut Down the Streets for a three-week tour that begins on October 21. “I’m a little bit anxious about [the tour], because it’ll be the first time I’ve been away from Stellan for such a long time,” admits Newman. “But at the same time I’m really looking forward to playing again. I put together a great band, with Neko’s guitar player, Paul Rigby, and Elvis Perkins’s drummer, Nick Kinsey. There’s also bass clarinet, flute, sax, and cello.”

It sure sounds a long ways off from the muddy noise of Superconductor. If the angsty guy who sang for that band could now meet Newman—perhaps sitting on his porch with a baby on his knee and a guitar at his side—what might the younger version say? The redheaded singer-songwriter scratches his mussy scalp and thinks a minute. “He would be totally amazed. He’d probably say, ‘Look at you, man—you totally have it made!’” he theorizes. And what would the older Newman say in return? “I’d tell him, ‘Yeah, I feel like I’m on my way, but I don’t have it made yet. I still have to work, you know?’”

As long Newman’s working, it’s music lovers who’ll have it made.

A. C. Newman will perform at the Bowery Ballroom in New York on October 22. Shut Down the Streets is out now on Matador Records. Matadorrecords.com. Acnewman.net.