Pollen, We Have a Problem | Gardening | Hudson Valley | Chronogram Magazine

Pollen, We Have a Problem

The Hudson Valley is sometimes referred to as "Sinus Valley" because of the prevalence of allergies here. Until recently, I never considered the allergenic potential of the trees and shrubs I planted—and when I asked some of my colleagues in the region, it was clear it wasn't on their radar, either. Why does it matter?

In 2012, I attended an urban forestry conference in Sacramento. I found one presentation highly provocative because it hinted at a potential downside of the urban forest. What could possibly be negative about living in close proximity to tree canopy?

One of the many benefits of urban tree canopy is said to be reduced air pollution, which could be expected to lead to a healthier respiratory environment. But assistant professor in epidemiology at Columbia University Mailman School of Public Health Dr. Gina Lovasi and her 11 co-authors found a surprising result for members of a group of 549 New York City children.

A statistically significant subset of those children—those whose mothers lived near urban tree canopy while pregnant—developed allergic sensitization to tree pollen by age seven. In their analysis of their findings, Lovasi et al. identified pollen as a potential factor.

According to the American Academy of Allergy, Asthma, and Immunology, more than 35 million Americans suffer from seasonal allergies. Plants that rely on the wind to distribute their pollen tend to be more highly allergenic than those that rely on bees and other pollinators. This is partly because wind-pollinated plants tend to release much larger quantities of pollen.

To be fair, many plants are not allergenic, but the ones that are can create disproportionate misery for those who are susceptible. In the Hudson Valley those plants include junipers, elms, oaks, birches, maples, and mulberry trees.

It's not realistic or reasonable to cull all the existing potentially allergenic plants from our native and planted landscapes. For instance, there's a pin oak outside my front door, and I notice my allergies flare up around the time it's pollinating, but a) I can't be certain it's the sole or even main culprit of my symptoms and b) it's a nearly mature shade tree that I'm sure as heck not going to take down. But how might I consider what I plant going forward? 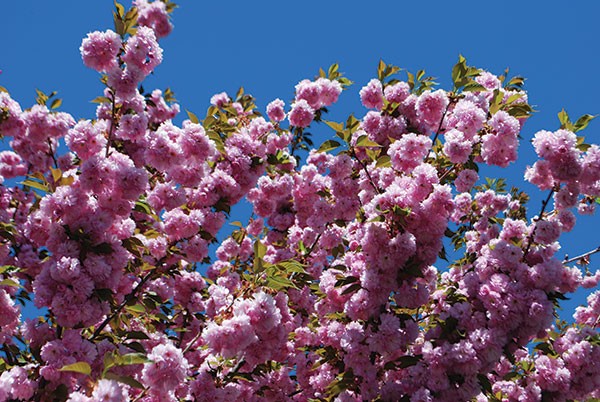 The California-based horticulturist and writer Thomas Ogren (safegardening.org) first got interested in pollen because of the misery he saw his wife endure with asthma, which was compounded at peak pollen times. Ogren is the author of two previous books on the topic (Allergy-Free Gardening and Safe Sex in the Garden), and his new book, The Allergy-Fighting Garden, merges those earlier books and adds new findings.

Ogren says, "In my research about which landscape plants triggered the most allergies, I realized just how important the dioecious species (those with male and female flowers on different individuals) were. I discovered that male trees were everywhere." The prevalence of male trees reflects the horticulture industry's bias toward using male cultivars (cultivated varieties) to avoid the "messy" fruit litter of female cultivars or trees that have flowers of both sexes. The problem with male cultivars is that their overuse adds to the pollen count, especially in spring.

Ogren developed OPALS (Ogren Plant Allergy Scale), which he has applied to measuring the allergenic potential of thousands of trees and other landscape plants. A pollen-free tree like 'Autumn Glory' red maple ranks at 1 (least allergenic) on the scale, while male green ash trees rate 9 (out of 10—most allergenic). A female juniper shrub ranks 1, while a male juniper ranks 10. He rates more than 3,000 trees and other plants in his new book. Ogren is working with the nursery industry to get tags made that include the OPALS rating so that consumers can be better informed.

Related to this, one may wonder, "Why does it matter what I plant? I will still be exposed to pollen traveling in from elsewhere." This is true, but in fact, most pollen settles near the originating tree; allergists call this "proximity pollinosis," meaning that the big allergic response comes from the tree just outside your window or the one you just walked by.

Ogren says that planting female trees is always a win in terms of allergy, because the sticky stigmas of female flowers "trap" pollen from a variety of other trees, reducing the amount that's free-floating in the wind. So in our home gardens and urban forests we should be preferentially planting female cultivars—those that bear seeds/fruit, not pollen. That said, seeds and fruit can be ornamental and prized, but what about the "mess" or the tendency for some species to spread a little too well via their seeds?

The work of Dr. Thomas Ranney at NC State University could be part of the solution. He and his students are developing seedless cultivars of plants that otherwise are invasive. They select for and create triploids, plants that have three sets of chromosomes and are thus unable to divide evenly during meiosis (formation of reproductive cells), which reduces fertility and prevents seed formation. (This is the process used to make seedless watermelons.)

According to Ranney's lab website, "Triploids can occur naturally or can be bred by hybridizing a tetraploid (4X) with a diploid (2X) to create seedless triploids (3X)." Fortunately, polyploidy (more than the standard two sets of chromosomes) is common in nature, yielding useful triploids and tetraploids.

Here's the kicker: In addition to preventing spread of invasive species, the benefits of triploids include reduced pollen allergens. Two of the trees his lab is currently seeking triploids of—lacebark elm and Norway maple—happen to be allergenic. Ranney says, "Although our primary aim is to eliminate fruit or seeds, the triploid plants generally don't produce pollen." This happy side effect could be put to good use by other plant breeders in the future.

Let your town's urban forester and your kid's school grounds supervisor know that you support the use of female cultivars and avoidance of the males of the more allergenic species. However, don't expect them to take down trees that are already maturing and providing many benefits to your community in terms of shade, carbon storage, slowing stormwater runoff, etc. Acknowledge that there are many selection criteria that they have to consider, but that you hope allergenic potential will be one of the criteria going forward, especially in sensitive areas like school grounds, well-trafficked urban parks, etc.

Window screens don't protect you from the tiny pollen grains. If you are having trouble with spring allergies, you'll want to close the windows.

Allergy testing will determine the specific plant allergens that are causing you trouble.

If timed properly, it is possible to "tip prune" the branch ends of troublesome trees and shrubs to prevent them from releasing pollen the following spring. For instance, boxwood has allergenic flowers but if kept sheared will rarely bloom.

Lessons from The Hills: Gardening on Rocky and Steep Slopes