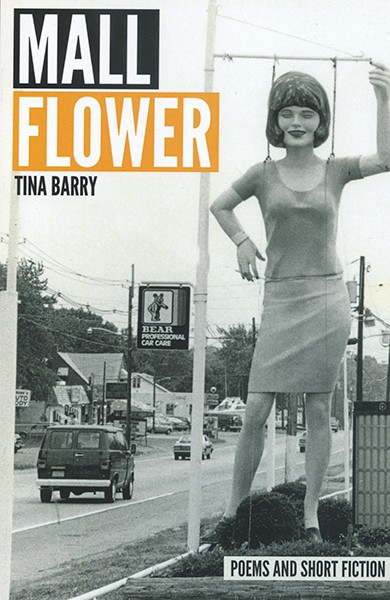 Mall Flower's irreverent, retro-modern cocktail of poetry and microfiction is garnished with lipstick-red maraschino and packs a potent kick. Tina Barry conjures a 1960s suburban childhood of checkered suits, ruffled canopy beds, and divorce. Adolescence hits with a hormonal blast ("I've blown out my shag haircut") and men come and go, "leaving the stink of barnyard/ on the sheets." The hilarious "Wool and Spool" channels an indignant poet left behind by her workshop peers' shift from off-rhymed sonnets to "an invitation-only-BDSM-LGBT-furry-friendly-little people-giants-welcome-NAMBLA tolerant-weekend-sexathon." The nerve!

The gardenia in Billie's hair, the police photo of Otis Redding's crash site, Miles infamously telling Monk to "lay out" are among particular details of music history illuminated under the empathetic gaze of Greene County poet Cornelius Eady in his recent chapbook-CD, Singing While Black. Performed with his band, Rough Magic, his songs tap the mythic expanse in narratives of black lives, antebellum to present, that rise up against the racist power structure. In "Tearing Down The Master's House—made indelible with arabesque runs by saxophonist Max Abrams—place and time are pointedly unspecific, so to evoke a mood both radically personal and globally resonant, "Summertime and the living is cryptic. / Where do you think you are?"

In 34 spare poems and an ecstatic epilogue, Pawling resident Erickson traverses a 15-month span containing a diagnosis of stage IIIc testicular cancer (the title's "dark bloom"), chemotherapy, IVF, four surgeries, marriage, remission, and childbirth. Cancer is sometimes his subject ("i shuffle to the Chemo Barn / to find my stall"), sometimes the background against which "backyard eggs and honey," the "grateful parenthetical" of a first snowfall, and "fields smeared with wildflowers" glow. Emotion-filled but never sentimental, this is poetry "deep in the marrow of life / awash in grief and praise." All proceeds from this book support rare cancer research at Memorial Sloan Kettering Cancer Center.

Boy With a Halo at the Farmer's Market

The halo in Boy with a Halo at the Farmer's Market, the title poem of Sonia Greenfield's prize-winning collection, is a halo brace: "How truly graced he must have been/ to survive a broken neck." The poems herein are likewise bolted, keeping the head held firm and the ambit of our vision disrupted. Wisps of ghost-town surrealism float up through the angled slats of Greenfield's lines, and perils that haunt the present make for a restless lyrical stride. In "Between Rest Stops" the poet concludes that "the road / before us always shimmers and / the road behind us holds / the golden hour in a shard / of mirror."

Natural-world inspired artworks act as muse for Dutchess County poet Raphael Kosek, whose each deft canvas opens "a window to heavenly space" ("Pelvis with Moon, 1943"). Caribou freeze in Inuit stone cut like sacred language. O'Keeffe's flowers trumpet miracles; a still-life painter's poppies, tulips, and sunflowers provide lessons in rectitude and aging. Christina's World evokes an improbable Eden, while in a persona poem Henri Rousseau confesses how "person and panther connive" to make a paradise of savagery. "What Van Gogh Saw" in "pinwheel stars" and "knotty whorls" of cypress is likened to "benediction / from a sea-waved sky." Over and over, the collection delineates perspective with linguistic elegance.

Shadow of the Heron