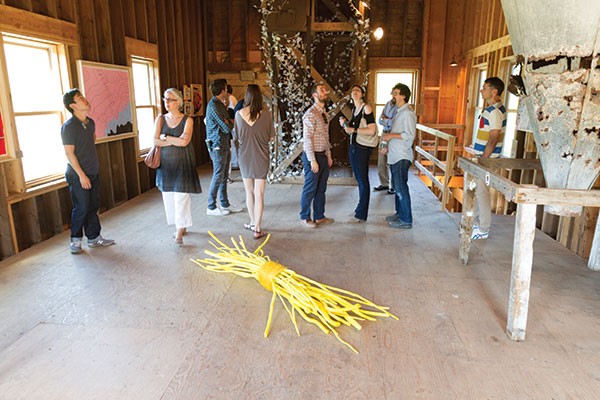 Rarely is a free event a hot ticket, but the Wassaic Project Summer Festival is one. Run by a troika of young artists, the event is a four-ring circus—music, film, dance, and visual arts—held inside and outside a former grain elevator in northeastern Duchess County. Their sixth season is the first weekend of August. These curators are addicted to novelty; only about five visual artists (out of 80) repeat from last year—and none of the bands. Because the festival is within walking distance from the Wassaic train station, it's highly accessible to nondrivers; both Brooklynites and neighbors arrive on foot. This may be the best art festival in the USA for pedestrians.

Highlights this year include the folk duo Sarah Lee Guthrie and Johnny Irion premiering their new Jeff Tweedy-produced album, Wassaic Way. (Sarah Lee is Woody Guthrie's granddaughter.) The actor Martin Starr, best known as Bill Haverchuck in "Freaks and Geeks," will present a film at the festival. Dancers from the Earl Mosley Institute for the Arts, based in New Milford, Connecticut, will also perform.

Artists from previous seasons have gone on to greater success. The film Sleepwalk with Me, directed by Mike Birbiglia and screened at Wassaic last summer, has had a highly successful commercial run. "We like to say, 'You saw it here first!'" remarks Eve Biddle, one of the founders of the festival.

The rest of the year, the Wassaic Project functions as an artists colony. Roughly half of the visual artists in the current show were residents at Wassaic during the past year. Participating artists are encouraged to attend the festival, where they wear name tags on lanyards. Painters and photographers are accustomed to anonymity, but the Wassaic Project encourages conversation between the "creatives" and the crowd.

One purpose of this festival is to demystify art and make it accessible to folks who don't commonly enter the Museum of Modern Art (which now costs $25). Increasingly, the art world is a specialized subculture, with its own language ("Olafur Eliasson interrogates intertextuality") and fashion trends (plum-colored drawstring pants). Wassaic bucks that trend. "It's great to see a 10-year-old who lives across the street standing next to a super-high-powered Chelsea gallery owner looking at the same piece of work, and being engaged in the same way," says Biddle. All the art onsite is for sale, with prices as low as $50. By giving a free festival, then dangling cheap art before the visitors, the project encourages "impulse collecting."

The art show, which is titled "Homeward Found," features an international roster of emerging artists. The design of the seven-story structure, dictated by industrial necessity, today strikes us as mazelike Surrealism. The curators carefully employ the building as a commentary on the art. Certain themes emerge in "Homeward Found": temporary dwellings, secrets encoded as riddles, a gentle eroticism. There are a number of examples of "found abstraction," in which the artist stumbles upon the nonfigurative. For example, the photograph "At Night" by Rachel Barrett suggests that a woman's back, dotted by freckles and moles, resembles a Jackson Pollock painting—or the night sky. Jonathan Schipper's "To Dust" is two gray figurative sculptures hung upside down and rubbed against each other by a mechanical motor. Gradually, their features become eroded, like driftwood. Perhaps the most memorable piece is a drawing in ballpoint pen by Shannon Finnegan spelling out the words "WANT LESS."

Visitors must preregister for camping. "Homeward Found" is also on view weekends throughout the summer, until September 2.

The Wassaic Project Summer Festival runs from August 2 to 4.