Play Misty For Me


There’s a sweet sadness that hangs in the morning air. A cold, monochromatic mist hugging the damp, coarse rocks. Gray and black. Black and gray. Barely a sound. Bleak…but beautiful. It might be the view out our own Hudson Valley windows in rainy mid March, when this is being written. It might be the lonely, wind-and-wave-lashed shores of Cape Cod in the off-season. Or it could be somewhere in rural Scandinavia at around the same time, when conversations happen around warming indoor fires and steaming bowls of yellow pea soup called ärtsoppa. And it could also be exactly how the recent music of Marilyn Crispell sounds: sparse, icy, haunting. But how about all four scenarios combined? That wouldn’t really be a stretch, given that the fabled Woodstock pianist has spent considerable time absorbing the atmosphere in all of the above locales, although it’s northernmost Europe that’s fascinated her most these last few years.

“I’ve always been a winter person, and there’s something very cozy about the way the Scandinavian people live during that part of the year,” says Crispell, who frequently performs in the region, often with native musicians, and was sufficiently moved to name one of her pieces for Sweden. “Burning torches, lining the city streets with candles for their festivals. I love the feeling of silence and space there, those pre-Christian, mystical Viking vibes. And I love Nordic folk music. It has this great, wild, keening sound. I recorded with [Swedish singer and fiddler] Lena Willemark, who I’ve become a big fan of. Even the furniture design there somehow reminds me of my musical aesthetic.”

The aesthetic in question is one that has changed much over time. It’s a sensibility that Crispell has been cultivating since she started taking lessons at age seven in her Philadelphia birthplace—long before the early 1980s, when she would emerge from the free-music scene to become one of modern jazz’s leading pianists. Her family later moved to Baltimore, where she spent most of her childhood, before she went on to study classical styles at Johns Hopkins University’s Peabody Institute. Crispell spent her summers at a music composition camp in Vermont. “I lived for those six weeks every year when I could go [to the camp] and be with people like me,” she recalls. “The instructor there, Grace Cushman, introduced me to improvisation. An amazing woman.” Crispell next enrolled at the New England Conservatory of Music in Boston, but stopped playing around the time she got married in 1969.

But after a divorce and a move to the Cape, she had an epiphanic encounter with John Coltrane’s A Love Supreme, which opened the door to a new universe. She learned jazz harmony under influential educator Charlie Banacos and in 1977 moved to Woodstock to study and eventually teach at the legendary Creative Music Studio. “One really needs to listen to Marilyn’s music from a purely emotional standpoint,” says CMS founder Karl Berger. “She’s unique in that she’s never really tried to follow others’ leads. She does her own thing, it all comes from her.” Crispell describes her time at CMS as “fantastic, unique, beautiful, complex.”

Those same four adjectives also perfectly describe the style Crispell had begun to formulate by this time, a captivating approach reminiscent of the propulsive “energy music” of Cecil Taylor. It won her a key admirer in the eminent composer, saxophonist, and sometime CMS teacher Anthony Braxton, who in 1978 recruited her for his quartet. After several successful European tours and albums with Braxton, she began leading her own bands and performing with Evan Parker, Reggie Workman, Barry Guy, Fred Anderson, Gerry Hemingway, and other groundbreakers. She cut a stack of fiery, highly praised albums as a side person and leader for key labels like Leo, hatArt, Black Saint, and Music & Arts, before her playing began to suggest a somewhat more lyrical side in the realm of Keith Jarrett and Paul Bley. She made her debut with Germany’s ECM Records in 1996 with Nothing Ever Was, Anyway, an album of compositions by her fellow Woodstocker Annette Peacock that features drummer Paul Motian and bassist Gary Peacock. Amaryllis, another outing with the same exemplary trio, arrived in 2001, followed by 2004’s Storyteller, which features bass man Mark Helias taking over for Gary Peacock. Her first solo set for ECM, the elegiac and supremely meditative Vignettes (reviewed in the September 2008 issue of Chronogram), came next.

To say Crispell and ECM are a perfect fit is putting it mildly. The label, which has nurtured the careers of Pat Metheny, Charlie Haden, Keith Jarrett, Dave Holland, and Chick Corea, has a stark, coolly Teutonic, and classically informed sound that’s a musical school all its own. Next month, the iconic imprint will release Crispell’s newest effort, One Dark Night I Left My Silent House, a collaboration with Cold Spring clarinetist David Rothenberg. Imbued with a glacial, almost unbearable tension that never quite reaches its point of release, the disc also stands out from Crispell’s earlier recordings in that she also contributes percussive “soundboard” and the taut, scraped strings of her piano’s interior. The recording holds 13 austere improvisations, many of them with titles alluding to birds: “Owl Moon,” “The Hawk and the Mouse,” “Still Life with Woodpeckers.”

The album is longtime ECM disciple Rothenberg’s first for the label but certainly not his first wildlife-themed project. His works with Basic Books and Terra Nova Records include the illustratively named volume Why Birds Sing, which begat an album of the same title featuring his live duets with birds, and another book, Thousand Mile Song (reviewed in the July 2008 issue of Chronogram), which examines the undersea sounds of whales and was complemented by the same year’s Whale Music, a live-on-location session of Rothenberg playing along with the amplified sounds of arctic whales.

“Since [the tracks on One Dark Night] were all improvised, Marilyn and I didn’t actually name them until later, after we’d spent some time listening to the recordings,” says Rothenberg, on the line from Hawaii, where he’s taping another album with whales. “But I do love the idea of birdsong and piano, so I guess I had that in the back of my mind when we were playing. Marilyn’s unusual as a musician in that she’s very focused—very, very deep—and very spontaneous at the same time.”

“I wouldn’t so much say that my style has changed over the years; more that it’s just opened up,” argues Crispell. “I’ve always been more comfortable in the right half of my brain, which I guess is why I got into improvising in the first place. But to me the energy music I did earlier and the quieter stuff I’ve been doing lately are equally intense. They’re just two sides of the same coin.”

So, yes, it’s fair to say that Crispell’s music has chilled from the white heat of her name-making ’80s epoch into its current state of crystalline coolness. But does that also mean it’s frozen in place? Far from it. It may travel at different speeds, but it’s always moving forward.

One Dark Night I Left My Silent House will be released June 8 on ECM Records. www.marilyncrispell.com 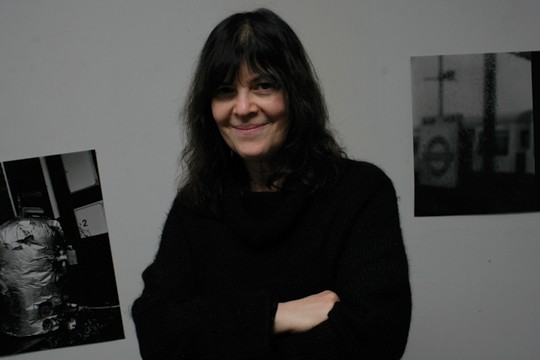