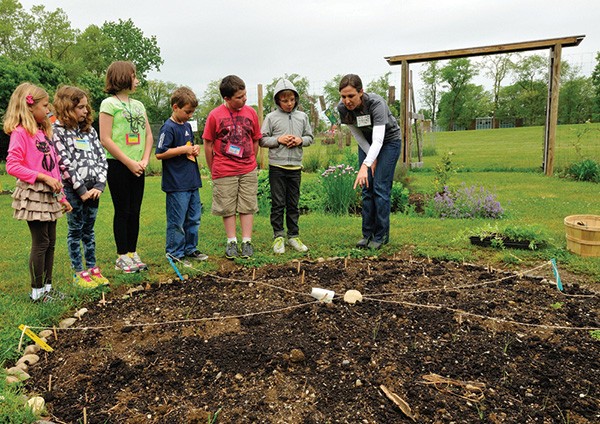 It’s every mother’s worst nightmare. Karine Duteil’s son, Jules, was coming home sick each day from school. She thought it might be food-related, and she realized she didn’t know what Jules was actually eating during the day. So she set to find out. What she learned surprised her. Even though his school, Phoenicia Elementary, is one of only a few around with a full kitchen, the lunches consisted of processed, reheated food, and Jules was being exposed to junk food while there. And, though surrounded by farms, the food wasn’t coming from them. “I never questioned it,” Duteil says.

Duteil is an ex-pat from France, where nutrition is part of the curriculum. In fact, in 2001, France upped the ante with the implementation of the French National Nutrition and Health Program. “Because childhood weight is often predictive of adult weight, some additional actions were taken specifically to target French youth,” the Ministry of Health stated. Things like making recommendations about food safety, banning vending machines, passing laws to provide a framework for food advertising, as well as free weekly fruit distribution in some schools. Healthy eating at school was something Duteil took for granted, and it was a jump for her to see that things were different in the U.S.

Duteil started packing Jules a lunch each day, and his nausea disappeared. But she thought, “If I do it for my son, I should do it for the other kids.” So, armed with a menu from one of the poorest public schools in Paris, Duteil went to the Phoenicia Wellness Committee and pointed out the striking differences. The problem was budget. The school was going for the cheap options. Which isn’t a surprise, as most school cafeterias are actually running at a loss. That’s one reason why they often supplement their service with “competitive food” sales – mostly chips, candy and cookies.

But Duteil also learned that there was a plot behind Phoenicia Elementary where someone had previously started to build a garden. It was a project meant to memorialize the classmate of a boy scout, but it hadn’t gotten past the beginning stages. It seemed like the perfect thing for Duteil, a landscape architect, to take on. She hoped it might resolve some of the disconnect between nature and food that the kids were experiencing. “Being a mother, everything gets mixed up,” Duteil smiles. “You bring your professional skills to your child’s education.”

Duteil got permission from the principal and then pulled in Mary Jane Lautenbach from the PTA to help. “Her vision was to get the kids involved,” Lautenbach says, “to see where the food comes from, get their hands dirty, get it into the classroom.” Duteil drafted a blueprint of the garden area, and, explaining its birds’ eye view, told groups of students to create a garden design. “I wanted them to feel that everything was possible,” Duteil says. What came back was ingenious: a museum with a shop; a garden within a garden. Within a week or so, Duteil pulled together a single design. “It was really challenging for me,” she says. “I wanted it to be a collaboration.”

“The biggest common denominator in the designs was water,” Lautenbach says. But a body of water poses a hazard at a school. So instead of the river the kids envisioned, Duteil designed a meandering plot that would bisect the garden, be planted with blue flowers, and have a bridge cross it. “After I presented the design to the kids,” Duteil says, “they were all very excited. They felt like it was theirs.”

At that point, Duteil found herself moving back to New York City, and it was up to Lautenbach to take charge of the local, anonymous donation and build the garden. Getting the teachers on board proved the next challenge. “The teachers had a sour taste because they had gotten it started before, and then it didn’t go,” Lautenbach says. The community, on the other hand, was gung ho. Local artisan, Cornelius McGillicuddy, built a gate, a stage, a vegetable stand and tables. A teacher’s father made benches. Cornell Cooperative Extension hosted a program to show how the garden could be incorporated into the curriculum, which was attended by three or four teachers and some community members. The principal was encouraging. Each teacher was given a classroom plot and license to do with it as they pleased.

Once the garden was in, Lautenbach organized various activities like crafts and tastings to bring people in. “The thing that caught on,” Lautenbach says, “was having a chef in the garden.” That first year it was Noah Sheetz, the Governor’s chef, who was charged with doing outreach. There wasn’t much growing yet, so they placed donated vegetables all around the garden and did an Easter egg hunt with the kids. Duteil was there and describes it this way: “Some kids never eat vegetables, but you’re with your friends; you’re outside; there’s this big, tall guy cooking. Hey, vegetables are cool.” Lautenbach adds, “Everything was made simply with salt and oil, even daikon radish, and the kids were tasting everything.”

With Lautenbach’s son now graduated, the garden continues with fresh organizers, and the guest chef tradition continues. And in New York, with her landscape design business, KaN, now about three years old, Duteil is shopping a proposal called Class Farm, which aims to build hydroponic garden classrooms. They require less water, don’t use soil, so soil fertility isn’t a factor, and there’s the ability to grow more plants in a smaller space, which is great for urban schools. Plus, one of the big problems with school gardens is that the bulk of the work needs to be done in the summer. But with KaN’s proposal, school gardens can determine the growing season or grow year-round. Given its advantages, hydroponics just might be the wave of the future for school gardens.

Get Your Home Goods Where the Crows Nest