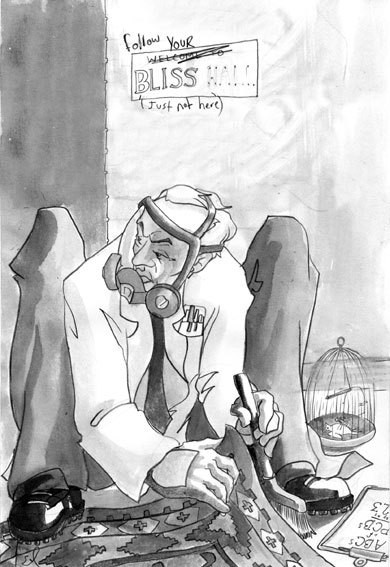 If Gage Residence Hall at suny New Paltz were a chemical waste facility, the pcb levels in its exhaust vents would exceed Environmental Protection Agency safety standards by up to eight-fold. Federal law says 10 parts per million is the limit in a vent; the Gage Hall vent tested at 80 parts. This contamination exists not in a remote corner of the building, isolated from residents, but rather in dust above a stove in a student lounge. Vents connect every lounge, laundry room, bathroom, and shower stall in the building.

Gravel in the Gage Hall basement contains nearly three times the federal limit for outdoor soil—at an industrial facility, mind you, not a residential one. There are no federal limits for homes because there are not supposed to be any noticeable concentrations of pcbs where people live. Since February 1992, 370 students have lived inside the building.

There is also contamination in a dusty radiator in the building’s back entrance way. A ceiling tile in a student lounge, above a television set, is laced with pcbs. So is wallpaper in the same room; the room is open and unlocked, not sealed in plastic. There are no warning signs anywhere. Except for rumors, most students are clueless.

This building is certified clean, and was part of a $50 million cleanup effort. But Gage Hall and neighboring Capen Residence Hall were opened long before most of that money was spent.

A few paces across campus, in Capen Residence Hall, a dusty, lint-filled vent in the laundry room has more than double the federal allowable pcb level for a factory or chemical waste facility—23 parts per million. A radiator matted with dust, thick as carpet padding, has high levels of contamination, which raises the frightening prospect that every radiator in the building is contaminated. Electrical wires, wiped down with alcohol and a swath of cotton, showed high levels of contamination, raising the prospect that electrical outlets in the building are contaminated.
How do I know this? Early on the morning of February 12, 2004, I entered Capen and Gage halls with two student witnesses and collected the samples myself. Later that morning, I sent seven sample jars to a first-rate private laboratory in California, Sequoia Analytical, whose clients include private industry as well as municipal, state, and federal agencies. (My publishing company, Planet Waves, Inc., paid for analysis of the samples.)
This is called independent citizen sampling, and I did it because suny’s published reports of the levels seem unusually low, given that in December of 1991 pcb transformers burned in both Capen and Gage. Having investigated and written about the botched PCB cleanups in these dormitories since 1992 (including many articles for Chronogram, the New Paltz Times, and the Woodstock Times), I wanted to know the truth, and I did not want to hear it from someone else.

The results are in: All seven samples show pcbs, some at extremely high levels.

For years—in fact, since the very days Capen and Gage halls opened a month after the explosions—everyone has been told that these buildings are perfectly safe. Parents had their doubts on those freezing February mornings when the structures were reopened before the test result books were available for examination, and when cleanup workers in Tyvec suits and respirators still roamed the campus.

But were those test result books, which you can still find in the campus library, at all meaningful? Capen and Gage were re-opened without any tests having been run on the ventilation systems. Heating systems in Capen, Gage, and Scudder were also ignored, despite the fact that the Bliss Hall heating system was discovered to have been a path of contamination in 1992. Now, it seems, we can see why no heat and vent tests were taken in Capen and Gage before the buildings were declared safe. The same is true of the Scudder Hall heating system. These systems were not declared safe on the basis of scientific data, but rather on the lack of it. Thousands of tests were taken on the campus, but these critical areas were ignored even when there were repeatedly discovered reasons to check.

It’s a mean trick. Under the best circumstances, the state usually acknowledges that pcbs have been left behind at “acceptable” levels in the buildings. (In a recent interview with the Oracle, suny New Paltz’s student paper, the campus housing director refused to acknowledge this.) My own tests show that contamination is a lot more pervasive. Even the epa, not known for its stringency, acknowledges that any level of exposure to these chemicals can pose a significant threat to human health and the environment. More exposure is worse. It’s widely acknowledged that these chemicals can cause multigenerational cancers, wreak hormone chaos, create birth defects, and grind down the immune system. And where there are degraded and burned pcbs, there are also dioxins, which are far more concentrated supertoxins and were in fact found in Bliss, Gage, and Scudder halls.

Ohhhh Sh*t! The Irony of the Regulation Conversation