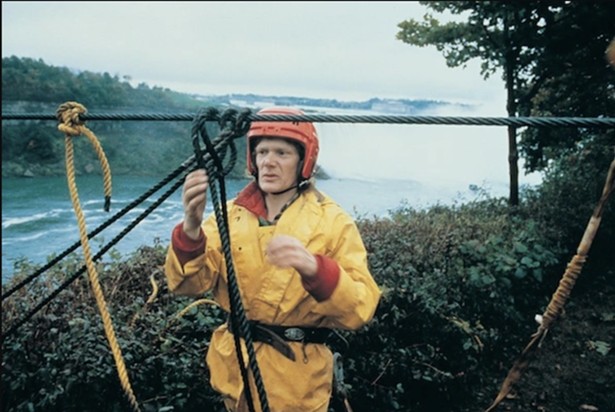 Just over a year ago, I talked to aerialist Philippe Petit for Chronogram’s website in what was certainly one of the most fascinating interviews I’ve ever done. Petit, in case you aren’t aware, is the man who walked on highwire between the two World Trade Center towers in 1974. On June 5, the French-born daredevil and Ulster County resident will host “Nuts for Knots,” a knot-tying workshop, at the Hudson River Maritime Museum in Kingston’s historic riverfront Rondout district.

In his field of art, the life of Petit, whose incredible story is chronicled in the 2008 documentary Man on Wire and dramatized in the 2015 film The Walk, literally relies on knots. In addition to the World Trade Center feat, Petit has performed on the high wire at majestic sites all over the world, including Notre Dame cathedral, the Eiffel Tower, the Sydney Harbour Bridge, Lincoln Center, and Grand Central Station. A self-taught engineer and master rigger, he personally rigs every wire on which he walks.


For this very-much hands-on workshop, Petit will each participant a yard of cord and share a selection of his unique, original loops, bends, hitches, binding knots, and termination knots. Along the way, attendees will hear many of his personal and historical anecdotes and colorful stories, take in demonstrations of his unusual variations of well-known knots, and see a magic rope trick or two.

Philippe Petit’s “Nuts for Knots” workshop will be held at the Hudson River Maritime Museum in Kingston on June 5 at 10am and 1pm. Each workshop has a maximum number of 14 participants. Registration at the HRMM website is $20 for individual tickets or two tickets for $35.