A Q&A with the Presidential Photographer and Author of Shade 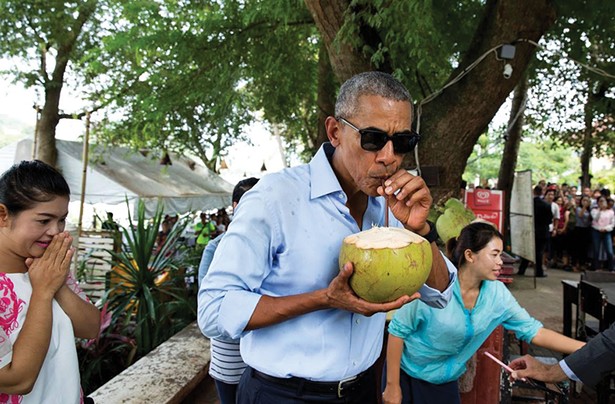 Urban Dictionary defines the term throw shade as "To say a rude or slick comment toward another person with little or no one else catching the insult except who it was directed toward." But no one who peruses Shade: A Tale of Two Presidents (Little, Brown, and Company), former Chief Official White House Photographer Pete Souza's latest book, is likely to miss the shade being thrown within its pages. Featuring over 100 images captured during Souza's tenure with President Obama juxtaposed with recent news headlines and tweets from the office's current occupant, the book chronicles the differences between the Obama and Trump administrations. The starkness of those differences, as one might imagine, is striking. And although in the book Souza allows the contrasts to speak for themselves—a news item about Trump's Muslim travel ban sits next to a photo of Obama shaking hands with children at a Baltimore mosque; a headline about Trump revoking Obama-era climate policies appears alongside a shot of Obama in discussion with adventurer Bear Grylls at a melting Alaskan glacier—there's no doubt that there are great stories behind these pictures.

Born and raised in coastal Massachusetts, Souza studied communication at Boston University and Kansas State University and began his media career in the 1970s with Kansas's Chanute Tribune and Hutchinson News. He next worked for the Chicago Sun-Times before becoming an official photographer for President Ronald Reagan's administration (1983-1989; he was also the official photographer at Reagan's funeral in 2004). Souza's relationship with Obama began during the future president's first year as a senator and continued throughout his two White House terms. Shade is his sixth book of Obama photos, and he took time to answer the questions about it below via email. In an evening cosponsored by Oblong Books, Pete Souza will give a visual presentation followed by a Q&A session at the Bardavon in Poughkeepsie on November 3 at 7pm. Tickets are $38 and $60 and include a paperback copy of Shade. (845) 473-2072. Bardavon.org.

The concept behind Shade is different than the other books of the mainly candid photos you took during your time with President Obama. How did you come up with the idea for this book, and what made you want to do it?

The book is an extension of the posts I began doing on Instagram only days after the [Trump] inauguration in 2017. After shading Trump for a year, I thought a book would be a good record of the reckless behavior by the current president.

What drew you toward photography as a medium, and what age were you when you first started taking pictures?

I originally went to Boston University with the hopes of becoming a sportswriter. I took my first photography class during my junior year and I knew right away that's what I wanted to do. But it took me five years before I was any good at it.

You entered the photojournalism field in the 1970s, the decade of Watergate. How did coming of age as a photojournalist in the climate of that heady era shape your work when it comes to political subjects?

Watergate was long past by the time I started my photojournalism career. And I don't think it really affected me one way or the other. I never intended to make photographing politicians my career; it just sort of happened.

In addition to serving as the Chief Official White House Photographer for President Obama, you also served in that capacity for President Ronald Reagan. Ideologically the two presidents were certainly very different, but as subjects was there anything that they shared? What were the main similarities and differences between them, as far as the way they liked to work with you for pictures?

The one similarity between Obama and Reagan is they both had fairly even-keeled dispositions. Which I think is a good trait in a president. Reagan was in his 70s when I started working at the White House (I was in my 20s). I wasn't the chief photographer, so my access to him wasn't the same as it was with Obama. With the latter, I had known him for four years before he became president. I was a seasoned photojournalist and a few years older than him. I may not be the best photographer in the world, but I believe I was the best person to be his White House photographer.

Of all the images in Shade, which is your favorite?