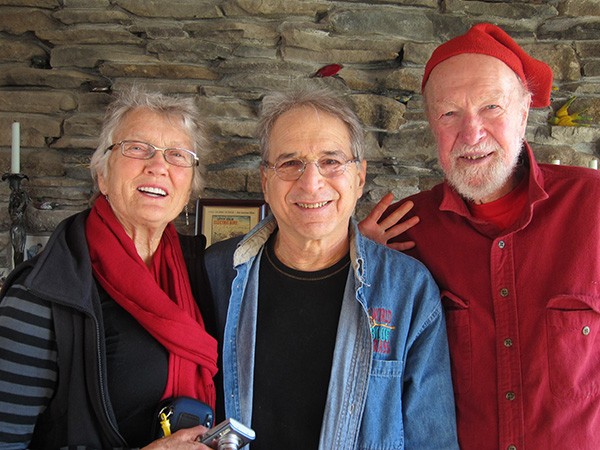 I don't know where I'd be today if it wasn't for Pete Seeger. I'm pretty sure I wouldn't have started singing folk songs or playing the guitar and banjo, and there certainly would not have been a lifetime of writing, performing, traveling, teaching, and innumerable musical adventures. I might not have even met my wife, Jane, whom I originally encountered through folk music. I owe it all to Pete. Back in 1954, some high school friends took me to a concert at the Brooklyn Academy of Music. There, on stage, was this tall, skinny guy, standing alone in the spotlight before hundreds of young people, playing his long-neck banjo and singing for, and more important, with, the crowd. He sang about all manner of things that I had never heard addressed before, and his energy, enthusiasm, and engagement with the audience captivated me, electrified me. I suddenly saw music in a whole new light. It could address social issues and relate to the joys and sorrows, the history and universality, of people everywhere. I watched Pete on stage and I thought, "I can do this too!" As I sang along on "Wimoweh," "Wasn't That a Time," "If I Had a Hammer," and "Goodnight Irene," I felt the thrill of being part of something vast and important. I thought that music was going to change the world.

The next day, I went out and bought a guitar. I found out about Washington Square, went to "hoots" and folk concerts, learned hundreds of songs and sang them with the image of Pete peering over my shoulder. I tried to approximate his stance, his instrumental style, and his cheerleader's approach to group singing. I sang only songs I thought Pete would approve of, and wore his records thin—"Darlin' Cory," "The Goofing Off Suite," "Sodbuster Ballads," and anything I could get my hands on by the Weavers. I sang of solidarity with unions, even though I wasn't a worker; peasant chants—and I certainly wasn't a peasant (never even met one). From today's perspective, this all seems naive and hopelessly outdated, but somewhere deep inside my soul the eternal optimism of Pete's songs still rings true. I think of those old days as sunny and warm, filled with camaraderie, friendship, and idealism, with Pete's warm voice, gentle humor, and thrilling banjo leading our way to a better world. And even if that new world doesn't materialize in our lifetime, I know that one 16-year-old's life was irrevocably changed by the revelation of a lone man on a wide stage, singing his songs and becoming one with his audience. Thanks, Pete. I'll be forever grateful.

I started quilting my Peace banner during the Gulf War, and it's traveled to marches and candlelight vigils for decades. During the war in Iraq, another mom and I carried it to a rally in Kingston where Pete Seeger was singing (wasn't he always?). It started to rain, and though Pete was unfazed, our children got whiny. Becky held up the banner while I got them cocoa. When Pete came offstage, he walked over and said, "That's a beautiful banner."  Becky replied, "My friend would be honored if you signed it." When I returned with the kids, she showed us the damp scrawl in green pen, with a banjo sketch.

Years later, Chronogram photographer Jennifer May and I collaborated on a book called River of Words: Portraits of Hudson Valley Writers. I wanted to interview Pete, and since he didn't e-mail, I mailed him a card with a snapshot of the Peace banner. Several weeks later, my phone rang, and a bright, reedy tenor said, "This is Pete Seeger."  For reasons I'll never quite understand, I burst out laughing and said, "Well, of course it is." He was tired of interviews, but offered to send us a song for the book. Then he told me a story about the song, and one about the Hudson, and 45 minutes later, he said, "A bunch of us old peaceniks get together on the shoulder of Route 9D every Saturday. Why don't you come down and join us?" So Jen and I did, and he told more stories, and let her take photos, and we stood with Pete Seeger and sang in the rain. I can't imagine anything finer.

Pete's our guy, our model. He shows us what responsible citizenry is. For us players, he reminds us that music must move us forward. Yeah, dance your ass off—and then sing something, together. Something with great words.

I once saw Pete at an honorarium for [musician] David Amram. All us pups (me, Josh White, Guy Davis, Tom Paxton) had all done our bit while Pete paced backstage. Finally, at the very end, Pete gets on. The audience snaps to attention. He begins, "I can't sing as well as I used to." The audience starts muttering encouragement. "But I know alotta songs." Now the audience is yelling, stomping. "And you can help me sing." He is drowned out by the applause. Talk about having them from "Hello."

Few humans have used music and the power of song as elegantly, as beautifully, and with as much conviction to communicate observations and ideas about this life, this fragile existence that we collectively experience, as Pete Seeger. Pete was a trailblazer, a humanist, a dreamer, a believer, a master musician, a hope machinist, and a poet who used language and harmony to bind this world together one sing-along at a time. His lifelong belief was that the world would not be saved by one big thing but by millions of tiny contributions. Millions of teaspoons heaped on the seesaw, one by one.

It is difficult to say goodbye to a friend. But with Pete's loss I am overwhelmed by a feeling of purpose and the confidence to live my life to its fullest, with the most righteous sense of truth and conviction. With this resolve, felt by millions of Pete's "children" the world round, and with Pete's guiding instructions that can be passed on and on into the distant future, I am well assured that Pete's legacy and vision will endure as long as there are people and singers inhabiting the Earth. As Woody used to say, and as Pete often reiterated, "Take it easy, but take it."