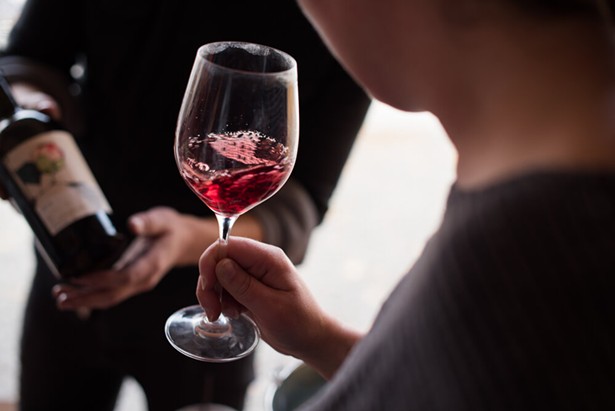 Though award-winning chef Zak Pelaccio may have left Hudson for redder pastures (his Taos, NM wine bar Corner Office opened in September), the one-day natural wine fair that he launched in 2016, Peripheral, has stuck around.


On November 12, under the direction of local sommelier Lila Holland, who has produced the event since 2017, Peripheral will return to Hudson for its sixth iteration with an afternoon of naturally fermented wines, ciders, beers, and other sustainably produced, craft beverages in Kitty’s new warehouse events space down on the waterfront. Enjoy unlimited tastings of over 300 beverages as you speak with producers behind them, importers, vendors, and fellow natty wine enthusiasts.

As the natural wine scene has moved into center stage from the periphery, so too has the festival evolved. "Our 2021 focus on domestic wine was a result of the pandemic's travel restrictions, but ended up being incredibly inspiring for us," says Holland. "We hosted a large and diverse group of younger, newer, scrappier makers who brought a palpable creative energy to the fair. It was fantastic. Peripheral exists in support of small-scale farmers and makers, so it felt really good to give a platform to these folks."


This year’s event will put a special emphasis on the increasingly diverse and robust group of producers in the Northeast, as well as shine a spotlight on hybrid grapes, which are finally being embraced for their resilience in the face of changing climate. Hybrids are made by crossing European Vitis vinifera grapes with native North American grapes, and then selecting for traits like resistance to blight, drought, pests, and cold snaps.


"Many traditional grapes are too sensitive to stand up to these problems, so the reliability of hardier hybrids is hugely beneficial to those who can embrace them," Holland says. "We're noticing that a lot of younger, first-generation winemakers are very open-minded and curious in terms of what kind of fruit and techniques they'll employ—and a lot of newer wine drinkers are equally open to these different styles of wine. This is great news not only for climate-affected farming, but for creating a new climate of accessibility in both winemaking and wine enjoyment."

The list of participating winemakers is about 90 strong and includes producers from right down the road to the farthest reaches of the globe like Chile, Georgia, and Australia, plus a handful of importers. "This is a LOT more than we've had in the past!" Holland says. "Bigger than ever for sure," says Holland.

The 2022 participants include local producers such as Hudson Chatham Winery, Accordion Wines, Arrowood Farms, Left Bank Ciders, and Rose Hill Farm. Holland's picks? "Some standouts include Kalche Wine Co., a Vermont wine cooperative dedicated to sustainability and the decolonization of big wine; Fruitblood; an Ohio producer of irreverent and delicious fruit wines; and Alta Marfa, who are creating a dry-farmed vineyard in the mountains of West Texas," she says.

Chefs from area restaurants including Gaskins in Germantown, Saisonnier in Kinderhook, and Frankie’s, Merchants Social, and Bodega Aguilar Real in Hudson will be onsite selling food. Peripheral runs from 12-5pm, and will be followed by an afterparty at Lawrence Park with DJ and drinks sponsored by Depart Wine.

Tickets to Peripheral Natural Wine Fair are $55 in advance and $65 at the door and are available now online.

Inside Spaces at PS21 in Chatham