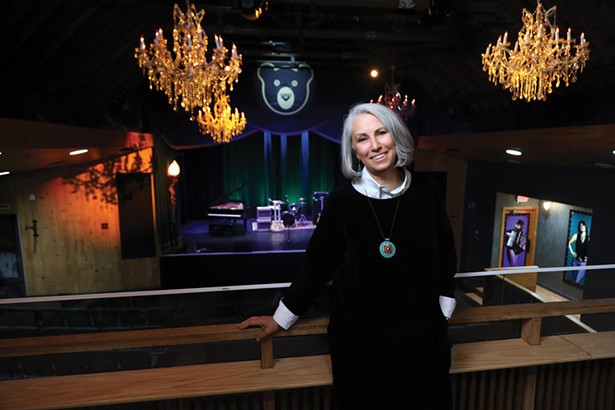 Lizzie Vann purchased the Bearsville Theater on Labor Day weekend in 2019 and immediately began renovations on the legendary but neglected venue. Just as repairs were about to be completed, COVID struck. The doors remained closed to the public, but behind the scenes Vann continued with the multimillion-dollar remodel. A year and a half later, Vann is excited to show off the new look to audiences that have been aching to have live shows back.

Bearsville Entertainment Complex Revived by New Owner Lizzie Vann
Since purchasing the Bearsville Theatre property last August, entrepreneur Lizzie Vann has undertaken major renovations to the complex to improve the venue’s acoustics and bring the entire complex, which includes two restaurants and the Radio Woodstock building, back to life.
By Peter Aaron
Theater

“It looks beautiful, decorated in the Mid-Century Modern style, which we believe is what Albert Grossman would have wanted it to look like,” says Vann, an entrepreneur who founded the organic baby food company Organix.

Grossman, manager to Bob Dylan and Janis Joplin, built the Bearsville Theater in the 1980s, but died before it was finished. It was completed by his widow, Sally Grossman, and opened in 1989. The theater is the center of the cultural campus that was for decades the proud heart of the Hudson Valley’s music and arts scene. A model commercial-meets-cultural operation, it attracted international headliners to its stages and both far-flung and local audiences and diners to its events and eateries as it embodied the creative spirit of Woodstock itself.

“I think people around here, and in our musical community, love this space,” says Vann. “It’s got the most wonderful sound and the room is beautiful, but it was derelict for three years. People just love the fact that it’s being renovated and it’s their wish that we reopen.” Upcoming shows include such acts as the Parker Brothers Extravaganza (July 3), the Sweet Clementines with Tracy Bonham (July 23), and Masters of the Telecaster featuring G. E. Smith, Larry Campbell, and Jim Weider (August 6).