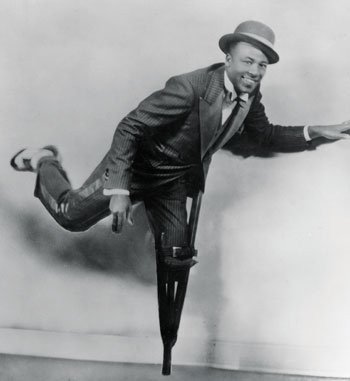 On Tuesday of this week I blogged about a dance event in Kingston, and today it’s another dancing-related happening. On Saturday, the Rosendale Theater will screen The Dancing Man, an award-winning documentary about legendary entertainer and beloved Ulster County fixture Peg Leg Bates.

Produced and directed by Dave Davidson and Amber Edwards, the film chronicles the remarkable life of Bates, a one-legged tap dancer who was an early icon of the African American stage. The loss of one of his legs as a result of an accident during his South Carolina youth did not deter Bates from an extraordinary career in minstrel shows and vaudeville, to Harlem in its heyday, and a record-breaking number of appearances on TV’s celebrated “The Ed Sullivan Show.” At the height of his fame he created the Peg Leg Bates Country Club, an all-black resort in Kerhonkson. Today, there’s a local road named after him: Peg Leg Bates Memorial Highway in Kingston. February being Black History Month, this fascinating doc will make a fine to-do. Here’s a clip of Peg Leg tearin’ it up back in the day: