Owner of The Flat Iron Gallery 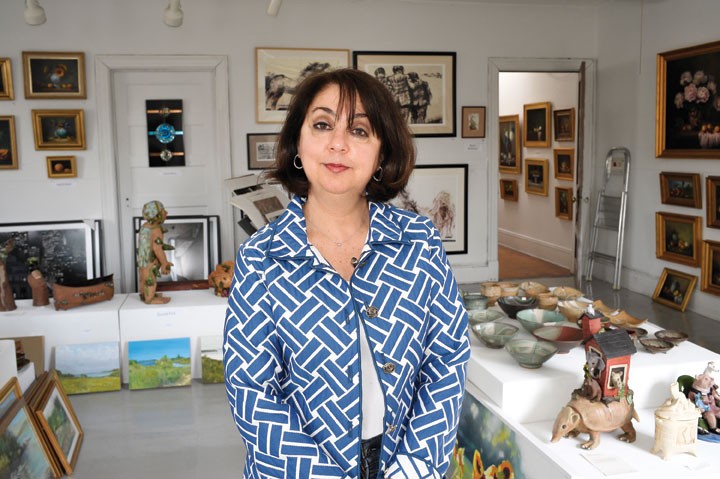 Twenty years ago, Wendie Garber was an art teacher and painter in search of a community. Then she found Peekskill. “I felt a little isolated as an artist because I didn’t belong to a community,” Garber says. “I think that’s what attracted a lot of artists [to Peekskill]. That they could be a part of an intimate art community where people can work together, have shows together, advertise together, even exhibit together. The artists get along well, they know each other. They’re more like a family now.”

She rented a space in a traditional flat iron building in Peekskill across the street from the Paramount Center for the Arts at a time when town leaders were working with businesses to rent empty spaces to artists for lower rents. Four years later she went from painter to gallery owner when she opened the Flat Iron Gallery. “We specialize in contemporary fine art and handcrafted jewelry,” she says. “We are located in the heart of downtown, in the art district of Peekskill.”

Sixteen years later, the Flat Iron Gallery takes up two whole floors of the building, and Garber now represents over 100 artists. “Some of the artists that I represent are local, from the community,” she says. “Some are even in my building. The Flat Iron Building has seven art studios in addition to the gallery spaces. I have keys to all those studios and I represent those people, so even if they’re not in their studios working, I can open them up and show their work to other people and sell their work. But the artists are often there themselves, and people can go in any time their doors are open and see what they’re working on and meet the artists.”

At any given time, visitors to the Flat Iron Gallery may see exhibits of painters, jewelers, potters, sculptors, glass blowers, or any combination thereof. “We put up a new show every single month,” says Garber.

Putting the years of work into her gallery has allowed Garber to become something of a maven of the Peekskill art scene, and she has seamlessly slipped into the role with ease. When visitors come to her gallery, she sees them as not just her customers, but customers of the entire Peekskill art community and will often send them to other local galleries if she feels they would be interested in the work being shown. “All the artists support all the other artists,” she explains. “I think if it was a bigger city that may not work as well. But Peekskill is small enough that it is more like an intimate family where everybody works together.”

Located directly above the Peekskill Coffee House at 105 South Division Street, Garber sees her gallery as one stop on a leisurely night on the town. Visitors will come to Peekskill, perhaps for a show at the Paramount, visit one of the many restaurants downtown, and have a relaxing evening. “After they have a little relaxation, they’ll come in and say what’s new at the Flat Iron Gallery,” she says.

In the past 20 years, Garber has seen Peekskill go through a tremendous revitalization, and she has been at the center of that transformation as the city found new life by embracing the arts. “The city’s very successful in more recent years because it is now a center for the arts,” she says. “It really is known as an artist’s community.”

The Flat Iron Gallery is open Thursday through Sunday from noon to 6 p.m. or by appointment. For more information and to see the featured artwork, visit Flatiron.qpg.com.