A Memoir of Hiking in the Catskills

At eight I knew the Catskill Mountains in upstate New York were woolly mammoths moving in a caravan for our delight. They let us climb on their backs, pull on their firs, and ride them season after season. Often when my family arrived in June for our first hike, rock slides and rain gullies that hid the marked trail would clearly show us how quickly nature could overtake our puny efforts to domesticate her. That lesson would be repeated during my 50-year climbing history, sometimes with dramatic force.

But my earliest memories are idyllic—a band of trekkers led by my father with his hand-carved hickory stick, then us kids, and finally my mother, often pregnant, guarding the rear so no stragglers hurt themselves or wandered into the brush. Slide, the tallest of the Catskill peaks at 4,180 feet, is still my favorite. It gets its name from a landslide in 1819, not the rapid descent of some pilgrim who lost his footing. Rock formations, striations, and deposits all point to the glaciation that carved the Catskill range. 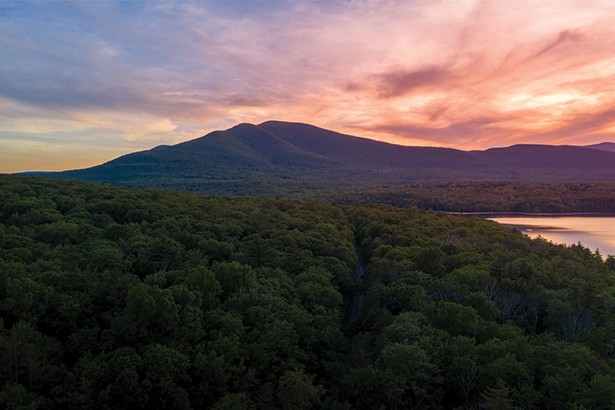 At several spots along Slide's trail, overlooks allowed us to stand on a rock ledge above the expansive valley and gauge our progress skyward. Then it was back on the path at a slower pace, as the sun flashed through a canopy of spruce, balsam firs, ash, and beeches, my mother tending to a child with gravel in its sneaker or one who needed a squat in the ferns. My mother was philosophical about peeing outside: "The foliage will be a little greener," she would assure us if we hesitated to drop our pants. My father liked to unlock large scalloped fungi from tree trunks and later inscribe the surface with the date of our hike.

Our reward at the top of Slide, even more than the sea of green beneath a boundless azure sky, was lunch. Afterwards, we took time to collect pine cones or balsam needles we would later sew into little bags. If we were lucky, a red-tailed hawk or bald eagle would perform its aerial acrobatics. For the naturalist John Burroughs, who immortalized his climbs in The Heart of the Southern Catskills, the summit view was incomparable:

We saw the world as the hawk or the balloonist sees it when he is three thousand feet in the air. How soft and flowing all the outlines of the hills and mountains beneath us looked! The forests dropped down and undulated away over them, covering them like a carpet.

In my absence from upstate New York, I heard the family had adopted a smaller mountain, closer to home, called Pisgah. As of summer 2018, the New York Department of Environmental Conservation was logging off the conifers along those familiar trails and many others. Still, as I discovered when I returned, the Catskills were as popular as ever—and climbers as dangerously unprepared. I started hiking again with a club that catered to New York metropolitan residents—some were veterans, some had never seen moss.

My mother was philosophical about peeing outside: "The foliage will be a little greener," she would assure us if we hesitated to drop our pants. tweet this

My first trip out convinced me of the risks of relying on volunteer leaders. Our group of 12 stayed at an inn over Labor Day Weekend and included at least three experts, several experienced hikers, and one beginner, who made a mistake that could and should have been corrected by those assigned as "sweeps." Instead of turning left down Wittenberg, she walked straight up Terrace Mountain. Only when she reached the lean-to and fire pit about 5pm did she grasp her mistake. She stayed put and that probably was the wisest thing she could have done. But as the temperature fell—it was 40 degrees in the valley that night—she panicked. Fortunately, she was joined by backpackers who spent the night with her in the lean-to. It was a tragedy of errors: the "sweeps" failed to do their job by counting heads on the trail; the leader failed to report her missing until 10:30pm.

Because the lost hiker was my roommate, I was nearly as upset as she was to be left on Terrace Mountain overnight, but it was a warning about the need (1) to have rules and (2) to stick to them for everyone's safety.

Not two years later, I was the one who made a mistake—or several—and almost paid for it with my life. The rules I ignored? Always hike with a buddy, and be prepared for the worst. My route this summer afternoon was one of the easiest I've ever taken—from Platte Clove Preserve to Echo Lake and back, about 8 miles. This trail isn't steep nor challenging, and my company for the first hour was families with kids and dogs. At Echo Lake, I sunbathed for 15 minutes before starting the gentle ascent back to Elka Park. Sprinkles of rain convinced me to duck under an outcrop, but when the "sunshower" escalated to a thunder storm and heavier downpour, I realized I needed to stop lollygagging and get off the mountain.

One of the biggest mistakes I made was to wear tennis shoes, not a problem on this trail in dry weather, but I was getting soaked. My gear was a backpack that contained a light windbreaker, water, and maps. The woods grew dark and the trail sluiced rainwater. I tripped on a tree root and hit the ground, the bridge of my nose on a rock. In seconds, my condition changed from uncomfortable to dire. Spitting cartilage, I used my bandana as a bandage and removed my broken glasses as it was easier in the rain to see without them. That is until I lost sight of the yellow trail markers.

I yelled, but all those kids on mountain bikes and families with German shepherds were at the Dairy Queen or safe at home. I knew one thing: I couldn't panic. I set my soaked backpack down and surveyed the small clearing I was standing in. One area of the underbrush was more trampled than others, and I followed it until I spotted a yellow marker on a tree trunk that eventually got me to the trailhead and my car. A neighbor drove me to a hospital where they cleaned and stitched me up. In my haste to treat the cut in my head, I had ignored a fall that caused my right leg to swell painfully. What would have happened had I broken it? For hours after I escaped the woods, I was still shivering from hypothermia.

I was lucky; many hikers—especially at Kaaterskill Falls near Palenville in Greene County—never make it home. According to forest ranger Rob Dawson, the last four people who died at the Falls were taking or posing for pictures. (Another thing to blame on social media.) Were they hikers or sightseers and did anyone tell them wet rocks are slippery? Stephen King couldn't make up the accidents reported in the Catskill Mountaineer, but for rangers like Dawson, Russell Martin, and Kenny Gierloff they are accidents that could have been avoided.

Hikers get lost because darkness closes in on them, and they have no lights or they sprain their ankle and can't walk or the weather changes, as it did on Platte Clove, and they lack warm, waterproof clothes. In addition to carrying the right gear—a whistle, compass, fire-starter, flashlight, first-aid kit, water, maps—the best advice is to never hike alone. Tell someone about your itinerary and when you expect to return, but don't assume you can use your cell phone to contact them. Cell signals are unreliable in the Catskills.

Often it takes hours for Search and Rescue teams and forest rangers to extract lost or injured hikers. Helicopters are sometimes needed. A space or thermal blanket will help contain body heat and prevent hypothermia during the wait. Above all, Gierloff insists, wear the right footwear; no flip flops. "I teach young kids about preparedness by asking them to see how long they can walk on their hands," he says. "It really drives home the message: Take care of your feet."