One morning, while working to reclaim his overrun front garden, Greg Daigle found a dime. “I pulled up a plant and there it was,” he explains. After polishing it off, he realized the coin was minted in 1910—predating his vintage treasure box home by seven years. An artist and craftsman, Daigle has a knack for finding buried treasure. Whether it’s an antique icebox abandoned in a Dumpster (now refurbished and reimagined as a dish cabinet in his dining room) or a cast-off Christmas tree floating down the Hudson River (rescued from the current and transformed into a walking stick), he sees beauty in bygone things and lovingly restores what he finds into objects d’arte.

Sitting near the apex of a hill outside Cortlandt Manor, Daigle’s restored one-bedroom, one-bath home and surrounding gardens bear testament to his talents. Following the basket-weave brick pathways through the verdant landscape edged with waterfall brick trim and rough stone work feels like wandering into a little pocket of the past. A classic wood-sided cabin—built in 1917 by Manhattan-based optometrist Louis DeSantes—sits at the heart of the property. In the 1940s, DeSantes grafted a stucco, Mediterranean-style addition along the south end of the now T-shaped structure, giving the home some decidedly eclectic charm.

On a bright spring day, the surrounding woods and gardens are covered with a fuzz of light green and the neighboring hillsides are still clearly visible through the branches. Down a steep hillside, a stream ambles through nearby woods. Above the brick patio, carefully planned and laid out in a detailed circular pattern by Daigle, hawks swoop silently in the clear sky.

At patio’s edge, DeSantes’s brick-and-concrete barbecue grill is hand engraved with a record of its completion: the date, August 11, 1945, and the note, “Japan surrenders.” “It gives me the shivers every time I look at it,” says Daigle. Encircling the brick patio, the towering oaks and the blankets of azaleas seem as if they’re on the verge of erupting into explosions of pink and green. “What a time of celebration that must have been. The war was over and DeSantes was finishing the house and moving to the country full-time,” says Daigle. “This house really is an old soul.”

An Eye for Design

Like that dime or the discarded Christmas tree, Daigle’s cross-bred cottage could just as easily have been overlooked. “When I first saw the house it was so overgrown I drove past it,” explains Daigle, whose mother was an antique dealer and collector. After the passing of Dr. DeSantes and his wife, the home changed hands between architects before it came on the market again in 2008.

A Sarasota native, Daigle worked in the area as a construction manager when he went searching for a home in which he could invest his time and talents. After he found the property’s entrance, he took one walk around and immediately saw that he’d found a gem. “This house was a diamond in the rough, but I only saw the diamond,” he says. He called his broker that day, declaring his intention to buy the home “That’s not my usual style,” he explains. However, he’d sensed a kindred spirit in the hand, and eye, that had designed the property. “I’m into fine details and so was the doctor,” says Daigle. “I wanted to bring what he built back to its glory.”

While Daigle identifies as a “glorified handyman,” he has developed a keen sense of fine craftsmanship, as well as the rehab and creative skills to match. This is especially true when it comes to working with wood. Learning early on from his uncle Ed Boggis, who was a well-regarded woodcarver, Daigle developed his own creative practice, working mostly with driftwood and fallen logs. “There’s a lot of time walking the river and through the woods involved in this,” he explains. “I always find interesting things. Occasionally something makes it home with me and very occasionally a piece speaks loud enough to make into my own artwork.”

Whether that artwork becomes sculpture or something more utilitarian like a coffee table or lamp, is really determined by what he finds. “I let the wood tell me what it wants to be and I go with that,” he explains. “Mother Nature is the ultimate artist—I just have a knack for finding some of her more hidden work and bringing it to light.”

Daigle approached the home’s restoration with the same reverence he reserves for Mother Nature. From the get-go, he admired how the home’s smart layout made the most of the 1,000 square feet of interior space. Even though the original 1917 family room has a small footprint, its cathedral ceilings, sleeping loft accessed by a ladder, and corner windows gave a sense of spaciousness. Daigle carefully pulled down the pine-paneled walls and ceiling to add six inches of insulation, and then, just as carefully, replaced them. He also leveled and restored the wide-plank wooden boards over the home’s original radiant heat floors installed by the forward-thinking DeSantes. In the corner of the room, Daigle polished up the oversized brick and bluestone fireplace trimmed with a facade of granite and topped with the DeSantes family crest (complete with spectacles). 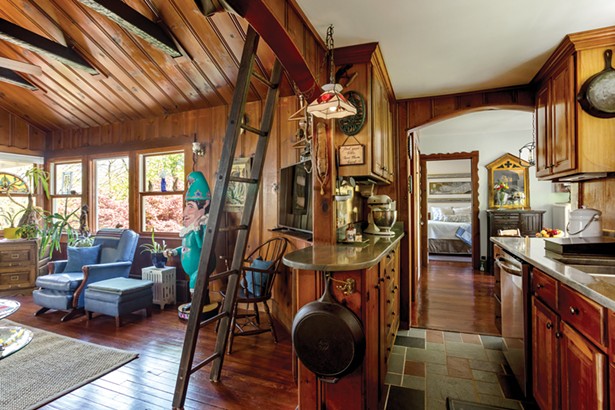 The home’s 1940s Mediterranean addition added extra bedroom space to the layout, as well as a dining room and bath. Daigle replaced the corner metal windows over the bedroom’s distinct circular radiators with Peachtree panes inlaid and wood trim. He filled the space with some of his own work, including a wall clock made from a toy box, as well art and antiques. At the opposite end of the addition, a large round room with an exterior door puzzled Daigle at first. “Originally there was an interior wall dividing the space,” says Daigle. “I could see from the floor that there was a door, but there was no closet in either room.” When Daigle updated the home’s electric he realized the answer: It was the center of the DeSantes’s country optometry practice. “The first room was a waiting room and the second was wired as an exam room,” says Daigle. Now he uses the space to display antiques and house the occasional guest.

The home’s kitchen and bathroom retained all of the structure’s historic design but only some of its appeal. Open to the family room and part of the original construction, the galley style kitchen needed a 21st-century update. The adjacent bathroom was divided into two spaces: commode in one small room and separate shower in another. “I wanted to modernize the home without changing its aesthetic,” says Daigle. In the kitchen, he added hickory cabinets to match the pine walls of the living room and a suite of stainless steel appliances. He then covered the floor with bluestone tiles to protect against moisture. Daigle combined the two bathroom spaces (closing off the old shower entrance with a new refrigerator) and added a new shower and wooden vanity with a porcelain sink. Daigle finished off the space with an alternating combination of subway and penny tiles reminiscent of the home’s brickwork exterior.

Daigle’s favorite room of the home didn’t require much revision. Part of the 1917 cabin, the classic, screened-in sleeping porch has vaulted ceilings and offers generous views of the gardens, patio, and woods. Daigle added a bed to the space as well as a cafe table and chairs in a corner. “I sleep out here every night it’s above 20 degrees,” he says. “I hear owls, raccoons, foxes, and all the birds waking up every morning.” The table is the ideal place to eat breakfast and watch wildlife.

Like much of the property, the indoor-outdoor space feels untouched by modern history. It’s almost as if—after a celebratory glass of champagne—the doctor dozed off on the porch that night at the war’s end and woke up on a recent spring day to find nothing in the immediate vicinity had changed. “This house feels like an escape to a better time,” says Daigle. “I’ve done my best to preserve that feeling. Really, I’m just the home’s conservator, not its owner.”