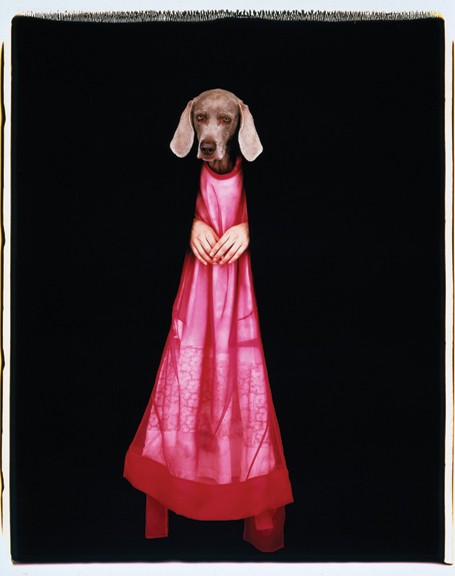 William Wegman is most noted for photos like this Polaroid—his Weimaraners’ expressionless faces atop the clothes of a jester, a king, or in this case, Little Red Riding Hood. Perhaps the curling locks of Cinderella or Grandma drape their snouts. And always from their sleeves sprout two human hands. Wegman has made his living dressing up dogs. As absurd as the concept sounds, the dogs carry a whimsy that inspired appearances on “Sesame Street,” “Saturday Night Live,” and Nickelodeon. The image of the dogs’ gray faces atop human clothes and with human hands miming a scene even verges on creepy. Suspending disbelief, you swear these dogs are baking bread, cutting each other’s hair, or are the Hardy Boys solving a crime. (The Hardly Boys was a short film Wegman screened at the Sundance Film Festival in 1995.)

Still, Wegman’s work expands beyond these iconic dogs—although quite often they are seen in his videos and photographs (minus their human apparel). His videos star his monotone voice, creating comedic scenes through his recognized deadpan delivery. “Polaroid,” featuring 12 of Wegman’s photographs, along with photographs by John Dugdale, Mark Beard, Tanya Marcuse, Jeri Eisenberg, and Melinda McDaniel, will be on display through May 30 at Carrie Haddad Photographs in Hudson. www.carriehaddadphotographs.com.