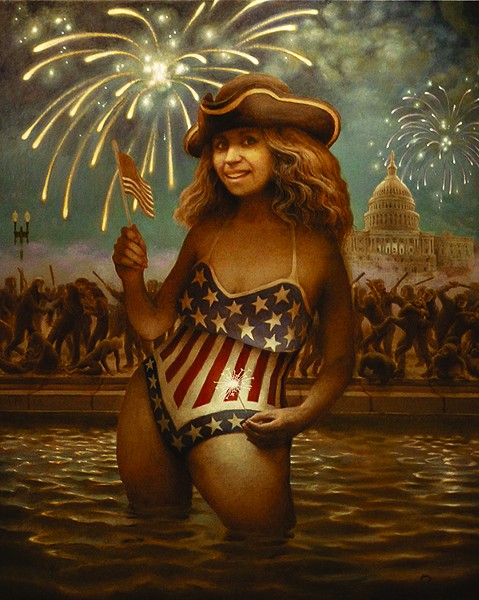 According to Richard Pantell, all of the figures in Patriots are celebrating their country. "America is a diverse country," he explains. "There are all kinds of ways to be patriotic." The demonstrators in the background might be voicing disapproval of the United States, but in Pantell's eyes, that's an expression of a deep fondness for one's nation—an urge to improve the country by voicing complaints about its present condition.

Pantell's art is often politically subversive—his painting No It Isn't Very Funny was even removed from an art gallery because people deemed it offensive. Depicted in the controversial piece is a homeless man rummaging through trash for food as his pants are falling down, a scene Pantell had really witnessed.

Patriots is the fourth addition to his "Bather Series," the first having been painted in 1986. Pantell is adamant about basing his subjects on real people and realistic body types—making his work an antithesis to the idealized images of fashion magazines and the media. Pantell's art is a celebration of diversity, and is intended to inspire people to feel comfortable being themselves.

Patriots is on display throughout the month of July at Bearsville Graphics / Karrick Fine Art in Woodstock. Pantell will also be having a solo exhibition at the same venue from September 26 to October 25. (845) 684-5476; Bearsvillegraphics.com.