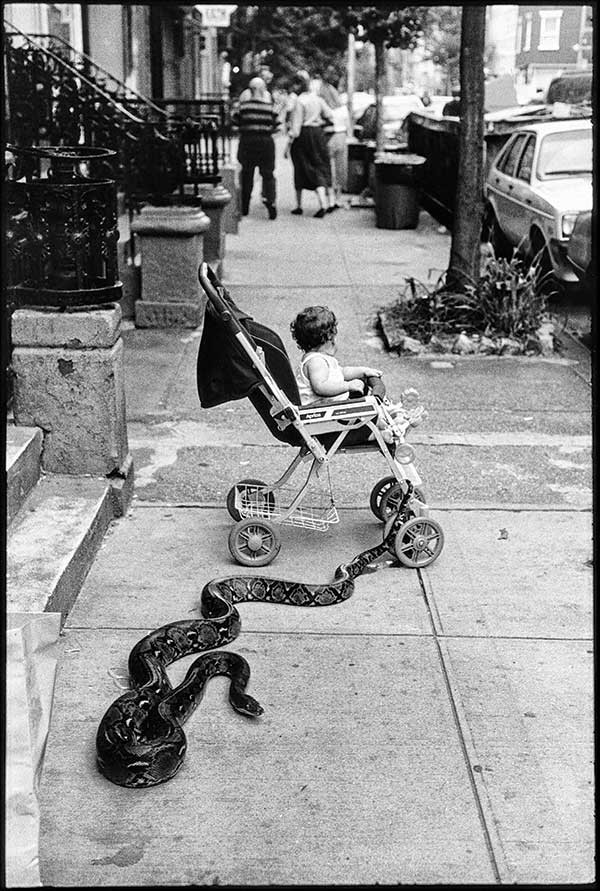 In the early 1960s, Leonard Freed snapped a photo of a Black American soldier standing at the Berlin Wall. Freed thought about the steadfastness with which the soldier defended America's vision of freedom abroad, and about the chokehold imposed by America on Black people at home. Compelled by the critical issue of race in America, he packed his bags and headed home, going on to shoot legendary photographs familiarizing the Black Freedom struggle for middle American readers of iconic publications like Life magazine.

Freed, who passed away seven years ago at his home in Garrison, shot photographs that focused on the lives of working people. His lens acted as a witness to injustice, inspiring empathy from the viewer rather than smug voyeurism.

New York City, 1985 documents another, absurdist side of Freed.

Showing a 17-foot reticulated python partially wrapped around the bottom of an occupied stroller, the piece gains its humor from a disarming lack of seriousness, tempting the viewer to believe that the python is taking the baby for a stroll.

Likely, Freed didn't know what his picture was about either. Speaking on the impact of his work, Freed said, "Photography is like life...What does it all mean? I don't know, you get an impression, a feeling." Whether capturing the March on Washington or a baby's stroll with a snake, Freed's work has a feeling of brutal honesty and great sensitivity. And, unlike many great artists, Freed leaves his viewers with an impression that is empowering to all.