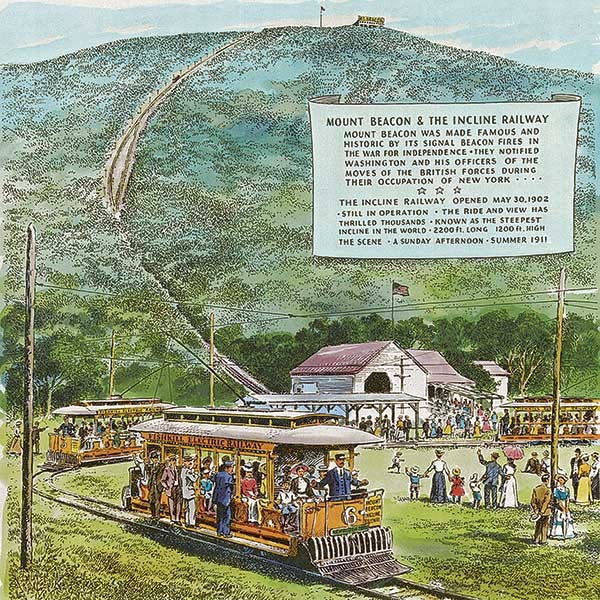 This month at RiverWinds Gallery in Beacon, a survey of over 50 works by John F. Gould (1906-1996), painter, illustrator, and longtime resident of Cornwall. Gould's long career, both as an artist and an instructor, began with pulp magazines like Detective Action Stories. Soon he was illustrating stories for national magazines like the Saturday Evening Post and Colliers. His favorite subject matter, however, was local and historical—especially the Hudson River Valley from Manhattan to Albany, including the ferries across the river and the Mount Beacon Incline Railway.

The Railway operated from 1902 to 1978, when, due to declining ridership, it closed. In 1983, a suspicious fire—vandals were suspected—destroyed the track, cars, and powerhouse, ending any chance of rehabilitating the derelict structure. For the past 17 years, the Mount Beacon Incline Railway Restoration Society has been working to restore the Railway to its former glory. On September 13, the Society was awarded a $100,000 New York State Capital Projects Grant through the office of Assemblyman Frank Skartados. This money will be used to move the Railway restoration project forward.

In 1957, Gould established the Bethlehem Art Gallery in Cornwall, which still features his work. Gould's sons Robert and Paul curated the current show at RiverWinds and Robert Gould will give a talk on his father's work on October 5 at 4pm.

"Legacy of John Gould" will be exhibited at RiverWinds Gallery in Beacon through October 6. (845) 838-2880; Riverwindsgallery.com.