You don’t see photographers like Joel Mandelbaum around much anymore. A gifted amateur (Mandelbaum is a doctor by profession), he set his camera on the street life of Manhattan and Brooklyn from 1968 to 1970, capturing the texture of daily life. Mandelbaum’s photographs—of old Italian men playing bocce on East Houston Street, of a drunk sleeping it off on a Bryant Park bench, of a mini-skirted woman in a downtown doorway, of a Fifth Avenue street corner at midday—show the fashions and historical facades of the period in an unerring documentary style. The subjects of Mandelbaum’s photos seem to be less the people themselves than the historical moment they are trapped in. The photo above, for instance, shows a man peering through the fence of the Brooklyn Aquarium. The most intriguing element of the image is the stockade fence, however, inexorably linking the photograph to a period before concrete and chain link construction became de rigeur for public institutions.

“Vintage New York,” photographs by Joel Mandelbaum, will be exhibited at the Seven 21 Media Center, 721 Broadway, Kingston, through the end of April. An opening for the artist will be held on Saturday, April 3, from 5 to 8 pm. Portfolio: www.hippocratesgallery.com. (845) 331-0551; www.seven21.com. 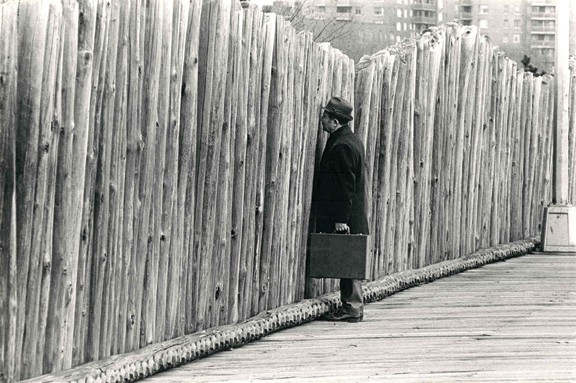