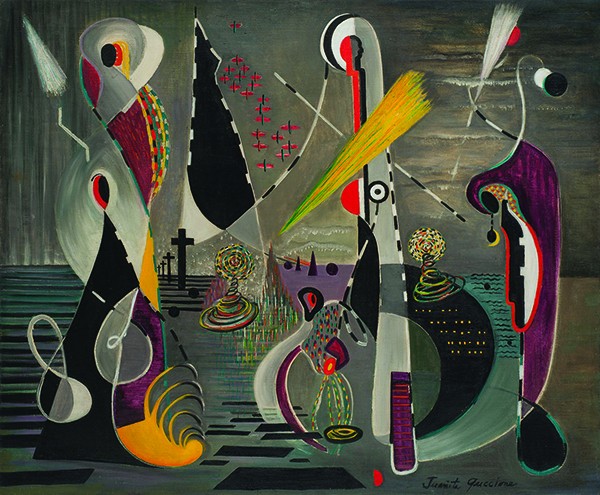 Nearly 80 years ago, the Brooklyn Museum displayed the works of several up-and-coming artists. Among the not-yet-household names featured were Jackson Pollock and Mark Rothko, who would go on to earn fame and recognition far beyond the art world for their development of the abstract expressionist style. They weren't the only artists there, though. Juanita Guccione was born in 1904, and despite decades of work that produced nearly 700 pieces of art that would be displayed around the world and earn significant praise, she is virtually unknown today. Her work sits in her son's basement, a far cry from the galleries of Manhattan, Paris, Beirut, Bombay, and San Francisco.

She spent her childhood in Massachusetts and later Brooklyn. After studying at the Art Students League, she left the country, eventually settling in an artists' colony in Algeria, called Bou Saada, amongst the Ouled Nail tribe. Her paintings from this period are devoid of the flamboyant romanticism of the Orientalist painters. She painted the Bedouin as friends and neighbors, reflecting her anticolonialist beliefs. Years later, Algeria acquired a large number of these paintings for display in the National Museum of Fine Arts, a reassuring sign that her legacy is not totally forgotten.

While it might be tempting to suggest her relative obscurity may come down to talent, Guccione's work was respectfully received in her lifetime, the respected French critic Michel-Georges Michel, for example, wrote in the early 1950s that she was one of a very few American artists who interested him. Cubist, realist, automatist, and abstract strains can all be found in her work. By 1970, she was painting electrifying works in watercolor and acrylic that critics consider impossible to categorize. For most of her career she was considered a Surrealist, often producing brilliantly colored paintings depicting a whimsical world ruled by women. In her later work, however, she abandoned the human figure and juxtaposition of the observed world all together, fully embracing an independence hinted at earlier in her career.

The Seligmann Center in Sugar Loaf will be hosting an exhibition of Guccione's work, "Defiant Acts," from September 13 through November 2. Art historian Susan Aberth will present a lecture on September 14 on the work of Guccione and other female artists of the Surrealist movement, who are increasingly being rediscovered after decades in the shadows of their male peers. (845) 469-9459; Kurtseligmann.org.