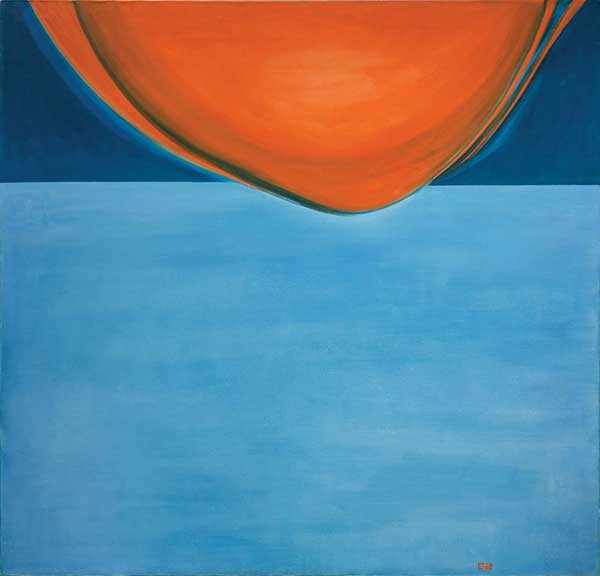 The Book of Genesis famously repeats the creation story. The first account is stark and mechanically causal—"And God said, Let there be light: and there was light." The second account is fueled by a more human narrative; Adam is made of the "dust of the ground," complete with flesh and language.

Cynthia Harris-Pagano's series of oil paintings inspired by the biblical creation story, completed in 1971, yokes together elements of each version—the abstract, minimalist forms are given life through vibrant blues and orange. In the sixth painting of the series, the featured depiction of Genesis 1:6, the orange form (which repeats and grows increasingly complex through the series) looks like a swollen bubble about to drop from the top of the frame. The pregnant image is no coincidence. "It came to me that it was a birth image," says Harris-Pagano, who nicknamed the piece The Breaking of the Waters.

"I've always admired the Sistine Chapel," says Harris-Pagano. "But at the same time it annoyed me—a creation story of God with a white beard." She notes the direct influence of the different creation accounts on her abstract approach. "One says male and female—he created them in his image. There was an equality there." According to Harris-Pagano, the containing form in the series is a symbol of femininity. "It's my answer to Michelangelo's creation," she says.

Cynthia Harris-Pagano lives and paints in the Orange County hamlet of Otisville. Her creation series is displayed alongside her more recent flood series in the exhibit "Genesis: Creation and Flood" at Vassar's Palmer Gallery through March 12. Palmergallery.vassar.edu; Portraitartist.com/pagano.

"Miracle in Bethlehem" performed in Woodstock