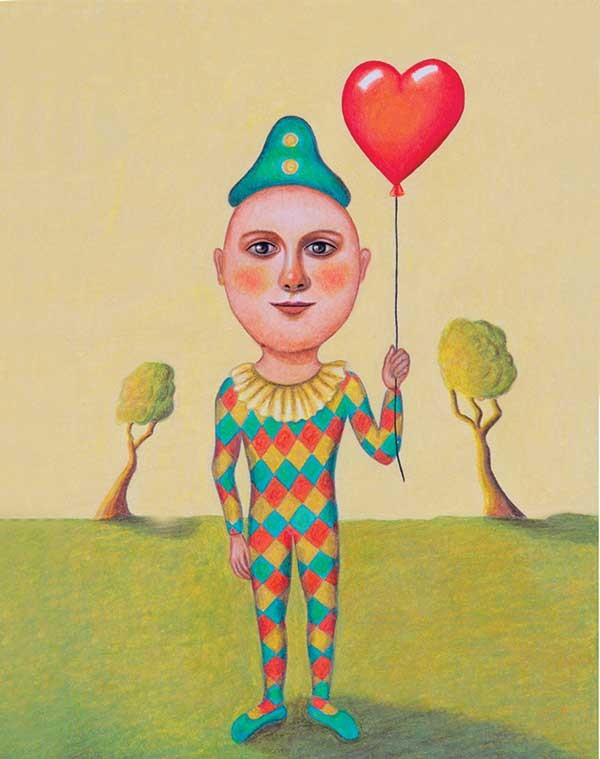 A boy dressed like a Harlequin stares out at the viewer. His cheeks are almost as red as the heart-shaped balloon he's clutching, and the corners of his lips are turned up into a slight, secret-holding smile.

The piece, The Boy with the Valentine Balloon, is undeniably the work of Carol Rizzo. The holiday-themed drawing embodies the illustrator's quirky style and her tendency to playfully manipulate anatomical proportions.

The boy's head—too large and round for his lithe body—brings attention to his face. Most of Rizzo's art focuses on faces that typically blur the boundaries between realistic and fantastical, such as in Aging, which features a human face rooted in a tree trunk. For the featured piece, Rizzo lifted the boy's features from an old circus acrobat poster in a subway. "I quickly sketched it years ago when I was living in London and it's just a face that I felt was a wonderful little's boys face," she says. The artist was also influenced by Jerdine Nolen's picture book Harvey Potter's Balloon Farm.

The Boy with the Valentine Balloon was born out of project Rizzo is currently working on. She's creating a line of greeting cards for all occasions, and wanted to find less a clichéd and more universal way to celebrate Valentine's Day. Rizzo wanted the boy to be holding a heart and the balloon proved to be the perfect solution. "Instead of 'I love you, sweetheart," the piece "gives a feeling of 'Valentine's for anybody,'" she says.

Rizzo lives in Staatsburg. Her illustrations have appeared in Newsweek, The New Yorker, and on the cover of Roll magazine. Rizzo's Portrait of an Easter Bunny was featured on the cover of Chronogram's April 2011 issue.