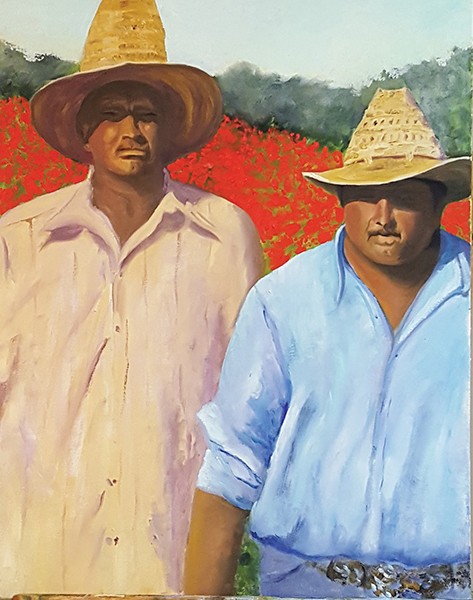 Last May, plein air painter Barbara Masterson spent time painting in the fields of Hepworth Farms in Milton. Migrant workers on the farm captured her interest, and Masterson was drawn to portray them in her art. "I started including them in my landscapes. Gesturing them in, if you will. As the summer went on, I looked for them. I fell in love with them and got to know them. As winter came upon us and they left, they haunted me. In particular, one worker. So I started to paint him, large, in my studio," says Masterson.

Most of the Milton resident's recent paintings document her surroundings and observations during that time. In Noble Workers, she uses oil paints with brushes; however, over the last two years, Masterson has challenged herself by not using any paintbrushes. Instead, she has used oil bars—blocks of paint—which she spreads with her fingers, and pieces of wood to create dense physical and emotional textures

Masterson's work is held in collections throughout the United States, Italy, Germany, and Guam. She lives with her partner on their certified organic farm B&L 4E Farms in Milton, raising cattle, beef, and chickens.