An-My Lê grew up in Vietnam and fled the country in 1975, during the final year of the war, eventually settling in the US. Obsessed with the repercussions of conflict, Lê’s photographs and films deal with how the personal and the physical are transformed by battlefields. She has staked a claim in a hybrid genre caught between documentary and staged photography. The viewer is unsure whether to ever fully believe what he or she is seeing, and Lê never lets on as to the literal accuracy of her photos. How did a monk and a sailor end up in a hospital waiting room? Surely the two figures are posed just so by the photographer. But why?

Lê’s projects include “Viêt Nam” (1994-98), in which Lê’s memory of the battle-scarred homeland of her youth is reconciled with present-day Vietnam. For “Small Wars” (1999-2002), Lê photographed and participated in Vietnam War reenactments (who knew such things existed?) in South Carolina. “29 Palms” (2003-04) documents Marines preparing for deployment to the Middle East by play-acting scenarios in the California desert.

An-My Lê is an associate professor of photography at Bard College. Her work is currently on view in “The Original Copy: Photography of Sculpture, 1839 to Today,” at the Museum of Modern Art. Photographs of Lê’s recent travels with the American military will be on display through October 30 at Murray Guy, 453 West 17th Street, New York. On October 16 at 4:30pm, Lê will discuss her work with writer Lynne Tillman at the galllery. www.murrayguy.com. 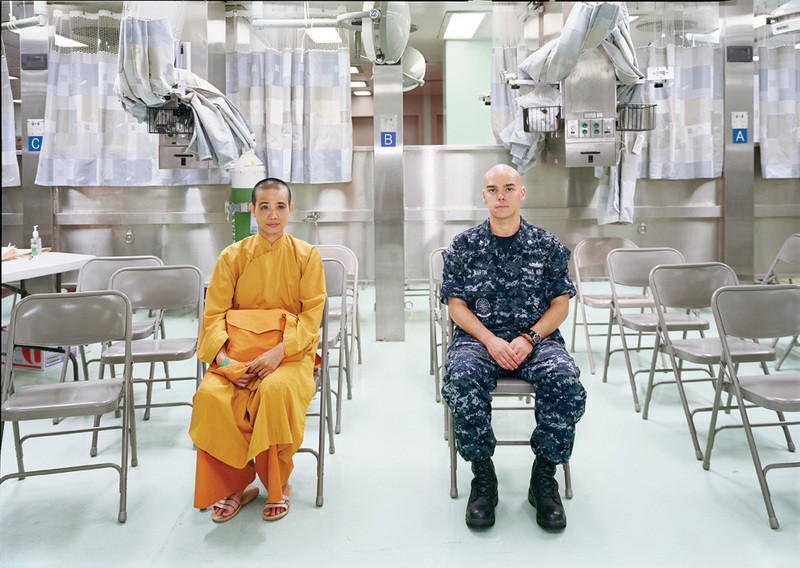