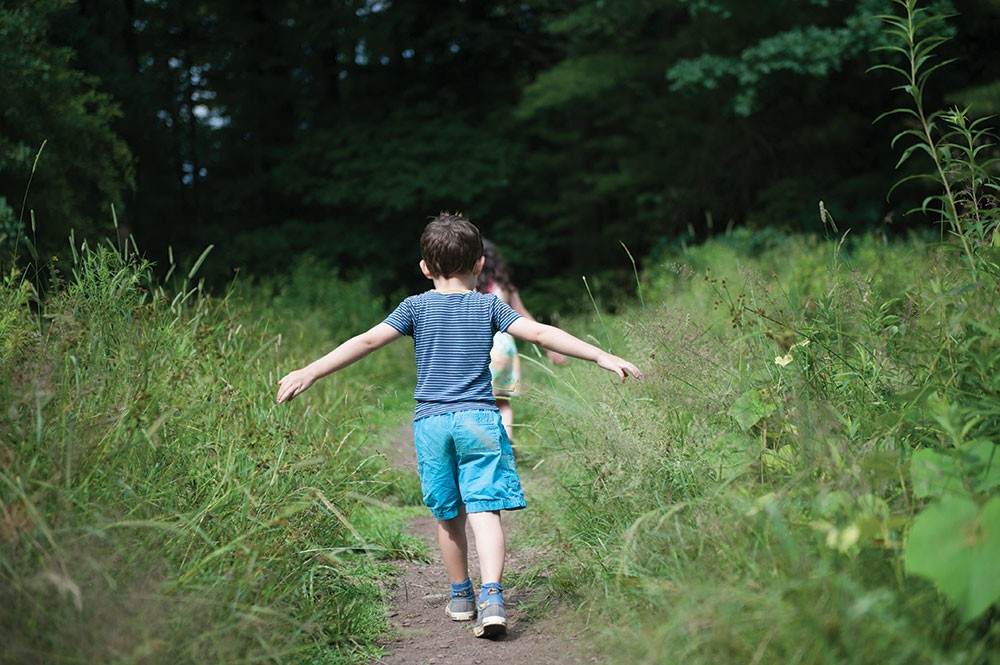 It's painting day at the Acorn School in Accord. At the bell, teachers sing to invite the two-to-five-year-olds over to the covered deck outside. By June, the children have worked up to using all three primary colors. So each station has three jars of paint. With hands in laps, the children wait while each of them is handed a piece of damp paper and a paintbrush. In experiencing this lengthy setup, the children are learning to infuse the activity with reverence, an integral part of the nursery school. "Painting day is a very reverent activity that we do," says Acorn's director, Motria Shuhan. "Learning how to use a paintbrush properly, being respectful to these materials, all of these tiny lessons are gestures of reverence."

The idea stems from a desire to pause and drink in the moment. "Reverence is such good medicine for today's world," Shuhan says. For many of us, scheduling back-to-back activities and taking on multiple time-consuming roles is the norm. And we pass the values of busyness on to our kids: rushing them from the house into a full day of school, and then to a roster of afterschool pursuits requiring intense time commitments. "There's a real stream out there around getting as much done in as little time as possible," Shuhan explains. "Most parents are relieved to be in a place where someone's saying, Don't hurry, don't add more, simplify, create more space, do less."

That's a message that's not often heard or heeded, but it's one that experts feel is incredibly important when it comes to our kids. With 7.5 percent of children aged 6-17 on prescribed medication to treat stress, lack of focus, and depression, and a growing awareness around addiction to video games and social media, our love of distraction is now being challenged by a call to pay more attention.

For over a decade, Canadian journalist Carl Honore has been pointing out the irony of our collective speed-based lifestyle. In his 2005 TED Talk, he said, "Sometimes it takes a wake-up call to alert us to the fact that we're hurrying through our lives instead of living it. We're living the fast life instead of the good life." His words then, and in his 2009 book Under Pressure: Rescuing Our Children from the Culture of Hyper-Parenting, struck a nerve. Not only because of secret desires to stop and smell the roses, but also because on some level we know that this cultural norm of busyness is marking our relationships. Honore wrote, "Wherever you look these days, the message is the same: Childhood is too precious to be left to children and children are too precious to be left alone. All this meddling is forging a new kind of childhood." One that ultimately forges a new kind of parenthood, too. This is where the helicoptering and tiger parenting comes in. In succumbing to the pressure of the Joneses, we lose sight of our instincts, and begin to manage our kids instead of parenting them, as if we were personal assistants, professionalizing parenthood.

Honore advocates slowing down not just in our family lives but also in our business lives, our networking, and, most recently, in his 2013 book, The Slow Fix, even in our problem-solving. He touts an international slow movement, starting with slow food, slow sex, and reaching as far as slow cities, where an emphasis is placed on public parks and bicycles. "Speed is fun; speed is sexy," he said at TED. "Speed becomes a way of walling ourselves off from the bigger, deeper questions."

When Betty's* son fell ill, she read everything she could about how to support and heal him: Weston Price's writings, books on nature deficit disorder, Waldorf education, and bioregionalism. It ultimately led her to move the family to the Hudson Valley and to shift their thinking. "By slowing down, we realized that we started choosing consciously. We're not just letting life happen to us," Betty says. Giving herself time to think about offers didn't feel like a choice before; she felt like she needed to know an answer and immediately start performing.

Now Betty allows their days to organically unfold, often by a nearby stream as her son wanders and discovers along its banks. In so doing, what happened was surprising. Betty noticed changes in herself and her parenting. Slowing down, she says, has a lot to do with self-trust: that you know what's best for your family, and that you can manifest elements of your life. "When it slows down, a lot of creativity comes from all sorts of places. There are odd little synchronicities and poetic moments that you notice."

That requires a level of mindfulness. Bernadette Noll, the author of Slow Family Living, told me, "That's probably one of the bigger pieces of it all: mindfully going through the motions." The message is often that parenting is something to be endured, even while people with older children remind us to relish each day because it's so short-lived. For Noll, connection can be found in moments of pause, scattered throughout the day. "Imagine if we put it on the calendar, and gave family time as much space as we give all those other things," she says.

As kids get older, the conversation around slowing down changes too. When her 13-year-old was holed up in her room, Noll assumed she was indulging in too much screen time. So she asked her daughter about it, and learned that she'd been digitally connecting with a friend to collaborate on hilarious videos. Rather than jumping to punish, Noll took the time to enter her daughter's world. "The long-range plan is, for that connection we desire with our adult children, we put it into place now." So that we can create meaningful family relationships. Slow parenting takes the pressure off our kids, and it might just make our experience of parenting deepen.

*Not her real name

Correction: An earlier version of this story included medical details about Betty's son that were misstated.