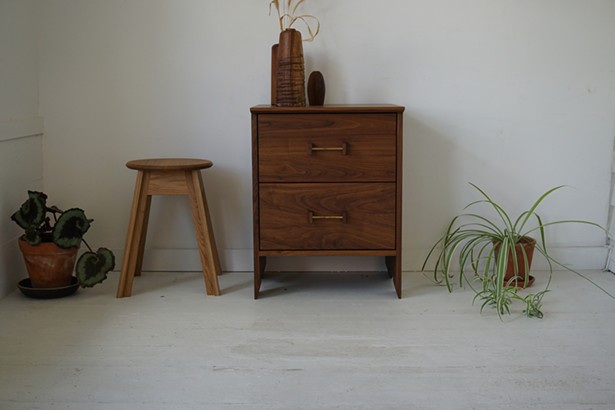 If you love clean lines, artfully simple furniture, and wood grain that speaks for itself, take a look at the furnishings available from upstate maker Pacama Handmade. Woodworker Cedric Martin is taking tradition-inspired design simplicity to new heights with Northeastern hardwoods, and you can order up his functional creations in the size, material, and finish that suit you best.

Martin’s background prepared him perfectly to, as he says, “capture the flag of traditional woodworking in a modernist context that allows for unique, understated details but never frills.” He grew up in a Mennonite family in Lancaster, PA and fell in love with woodworking in 9th-grade shop class, roamed a bit, and found himself creating furnishings for a Brooklyn cafe. 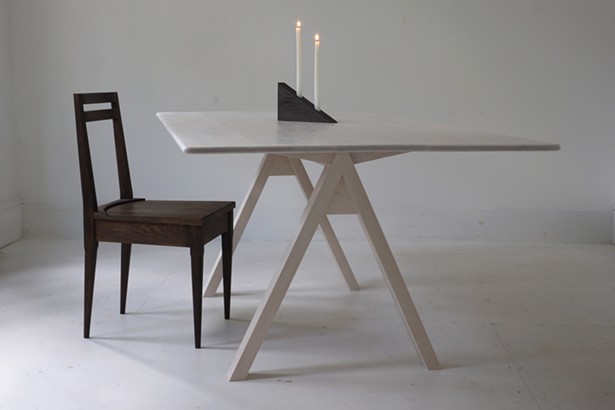 After high school, Martin went to U Mass in Boston. “It was liberating in a lot of ways,” he says. “It would be fair to say that Lancaster is a lot more conservative than I generally skew, but I’ll never stop appreciating the craft and workmanship traditions. But I did get into that mindset of ‘you have to get a bachelor’s degree. I missed woodworking, but I got into other arts—printmaking, music, video.”

Sociology degree in hand, he moved to Brooklyn to open a cafe with a friend and ended up building a lot of the furniture for the coffee shop himself. “I made a lot of the furniture and carved utensils, and it just got me back on track," he says. That was in my mid-20s and I spent the next five or six years doing woodwork part time, thinking about a niche.”

He took a job as a creative arts therapist in Harlem and used his leave time to seek out further education at the Center for Furniture Craftsmanship in Maine and the North Bennett Street School in Boston, then took a job in a high end cabinet shop.

Along the way, he met and married fellow creative Rebecca Steele, a Bethesda, MD native and graduate of Savannah College of Art and Design who found her own hands-on professional niche in her late 20s as a practitioner of classical acupuncture, but still makes art.

In 2011, seeking room to garden, work, and breathe, the two moved to the hamlet of Pacama, just west of Kingston. “It used to be bluestone quarries and now it’s heavily forested,” Martin says. “It’s the Catskills foothills, my sweet spot between the valley and the mountains, and it’s been inspiring me ever since I moved here.”

In 2013, Martin launched Pacama Handmade; in 2014, he opened his Woodstock storefront, offering his own work and that of other local makers who were a good fit. “I didn’t want it to be just this monoculture of all furniture,” he says. “Pottery, wood turnings—it adds balance.” Steele’s textile works are displayed at the Woodstock store, open Saturdays and Sundays from 12-5pm, along with work from Arc Ceramics, Jordan Colon Pottery, Blue Hill Spoonworks, and Lail Design.

Since going solo, Martin has been featured in Remodelista; displayed work in showrooms on both coasts; and exhibited at the Guggenheim Store, the Center for Furniture Craftsmanship, Housing Works' Design on a Dime, Boscobel, and the annual Field + Supply Design Fair at Kingston’s Hutton Brickyards.

With just one helper in the shop and one in the store, each made-to-order furniture piece requires a lengthy process, but one Martin won’t compromise. “I’m constantly trying to fill orders and also come up with new concepts,” he says. “I love doing everything from the raw wood, no formaldehyde or adhesives, and creating designs that can work in a lot of different spaces.” 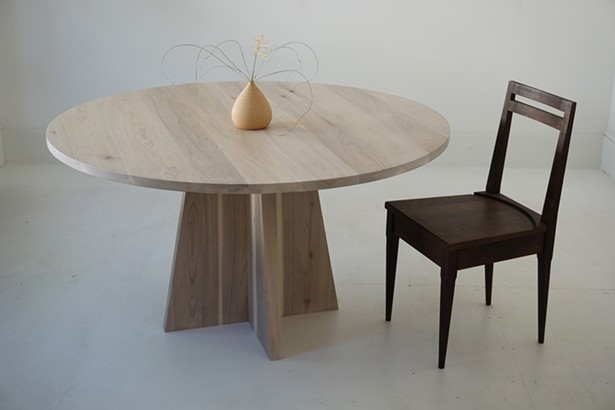 He’d love to one day find a way to maintain the integrity of the process while making his minimalist-with-a-twist design available to a wider demographic, but meanwhile, he focuses on designing and on delighting those he does serve. Your Astral Desk or Reunion Dining Table can be made to your precise size specifications, with a finish of your choice.

Hudson Valley life agrees with the whole family. “I love how it’s culturally rich and so connected to the city and yet so much more livable,” Martin says. “We have a four-year-old, which is the greatest, and I love watching him be outside.”