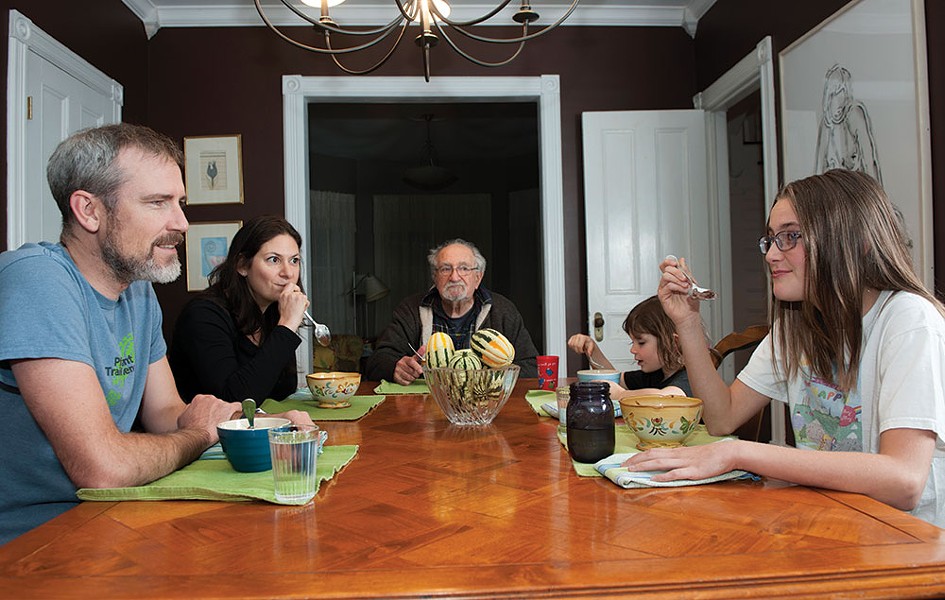 Young children and dinner tables don't always mix. So the Dunns have a game that they play. They established it as a dinner ritual when Matt and Zoe first got married. Matt's daughter, who was six at the time, wanted a lot of attention, so when she was with them, they would play Roses and Thorns. Each person takes a turn describing the ups and downs of their day. It encourages children not only to express themselves but to listen, too. A few years into it, during the game one night, Zoe told her stepdaughter that she was going to be a big sister. "It was my rose," Zoe says, "but it was her thorn."

The Dunns are just one of any number of variations on the blended family. When they merged, Matt and Zoe each brought someone to the mix: Matt's daughter, on a shared custody basis, and Zoe's dad, who lives with them. With both divorce and marriage on the decline, modern families look more and more distinctive and, according to a nationwide Pew Research Center survey, four in 10 American adults now have at least one steprelative in their families. There is no norm and each situation presents different challenges and opportunities. Blended families can comprise multiple full siblings, multiple stepsiblings on different cohabiting schedules, adult stepchildren, age matches, cultural differences—you name it. United by an adult's selection, blended families are an unsystematic mix of blood and chosen ties, which often means those families have to be intentional about things that solely biological families take for granted.

"Any time you bring two families together," Matt says, "there's an information gap, so that can lead to unintended conflict." The Dunns had to establish a new household structure in the middle of preexisting families. They wanted their daughter to know how important she was and also how important the relationship between Matt and Zoe was. So the first thing they did was to create a routine for their home, with predictable rules, where everyone would feel included. Bouncing between two households, their daughter needed consistency that she could trust. "We noticed the challenges and were observant to the things that would bother her and also that she responded well to," Zoe says. On transition night now, when their daughter first arrives at the Dunn house in Kingston for her week with them, she settles into her room for a while before jumping into the multigenerational household happenings, which now includes her four-year-old sister. Zoe explains, "That was a critical structure that really helped a lot."

The Dunns are especially intentional about their household because they know the odds are stacked against families like theirs. Statistics show an increase in the divorce rate with each successive marriage. According to the New York Times, blended families have a one in three chance of survival and the odds go down as children are added. "The first thing that I would recommend is for people to give up the expectation of trying to blend," advises Rachelle Katz, a licensed marriage and family therapist and author of The Happy Stepmother: Stay Sane, Empower Yourself, Thrive in Your New Family. "Stepfamilies are inherently different than traditional ones, and that's okay. Stepchildren and stepparents don't have to love each other, although they do have to treat each other with respect, kindness, and compassion." Through a monthly support group in her Manhattan office and private sessions via Skype, Katz helps stepcouples communicate effectively. Couples set the tone for a family, but stepcouples don't often have the opportunity to build a team relationship without kids already in the mix. She finds that establishing healthy boundaries, like deciding if surprise visits from the ex-spouse are okay, and removing expectations, like the biological parent hoping everyone will get along right away, disconnects some of the pressure that creates communication gaps and misunderstandings within a family.

"You can't see inside someone's marriage, but you can see inside their divorce," says Zoe. Her divorce from her first husband was amicable. "Marriage is hard work, and for blended families, it's really hard. In some ways, you have this previous experience to draw upon, but there's residual pain in that divorce that can remain in spite of moving on and starting new families." Inherent in divorce is a perception of failure, and there's a loss. Zoe feels that children are aware of those feelings, even if they're unspoken. Her stepdaughter navigates hurt feelings as she pilots between the two households. Though she has a younger sibling at each house, her experience of shared custody is one she traverses alone. It breaks Zoe's heart because she's been there. As a child, her mother had a series of marriages. Zoe, an only child throughout, came home from camp one summer to a new stepfather. "From the moment I met my husband, I knew what I was bringing into my life," Zoe says. "A man with a child, there's an inherent responsibility. In spite of the fact that I didn't have a good experience myself, I saw this as an opportunity."

"When it comes to being a stepmom, society typically views the woman entering the picture as an interloper," says Brenda Ockun, Publisher of Stepmom Magazine, an online resource written predominantly by therapists who understand family dynamics. "In other societies, it takes a village to raise a child. In North America, we expect one person to do it all."

Ockun feels there's a double standard for stepparents. "Stepmothers are seen as treading on a woman's turf; stepfathers are seen as heroes who rescue single moms." It's confusing for stepparents, who may not know where they stand. Society tells them to love the children as their own, but even seemingly harmless decisions like going to the Little League game or parent-teacher conference have to be measured.

Zoe is careful in how she speaks with her stepdaughter. In the morning, rushing to get everyone ready for school and work, she might be short with her four-year-old in ways she won't be with her stepdaughter. Her younger daughter has a confidence in their relationship that seems easily shaken with her stepdaughter, who is now also at the fragile age of 13. Zoe hopes that one day things will be less polite between them. "There's no bank for stepparents," Zoe says. "You're only as good as the last thing you did, only as loving as the last expression of love. If anything happens to change that, it's all wiped away." Matt feels it's a matter of learning each other's language and developing a language together. "You have to build the history," he says.

"One of the most important lessons is to follow the children's lead," advises Ockun. "And to understand that, over the years, things can change." Ockun started the magazine as a new stepmom herself. She knew that blended families face challenges like emotional adjustments and financial factors due to child support, alimony, and legal fees, which first families rarely do. A 20-year veteran of corporate marketing, she'd seen trade magazines and websites for just about every subject, but she couldn't find any resources for stepparenting. Yet Ockun feels educating oneself is really important.

Katz writes a column for the magazine and says, "Stepmothers are often unfairly blamed for the problems in stepfamilies. They shouldn't invest too much in trying to correct this image because it's often a waste of time." Instead, Katz suggests considering the role of a kindly aunt figure or friend, to ease the pressure. "Treat your stepchildren as you would anyone else you're getting to know. Some relationships will grow and develop into something really intimate and lovely; and some just might not."

Children of blended families are in a loyalty bind. If they like or accept a stepparent, they might feel that they're being unfaithful, unless they've received both verbal and nonverbal permission from the biological parent to build that relationship. As kids get older, loyalties might change. That constant state of flux often catches stepmoms off guard, and that's why Ockun feels letting the stepchild determine the intimacy level of the relationship is helpful.

From reading the magazine she publishes, Ockun has learned that one of the greatest gifts a stepparent can give to a stepchild is one-on-one time with their biological parent. Blended families can fall into the trap of wanting everyone to be one big, happy family, and so they plan a lot of group outings. "But just as you would in a nuclear family, sometimes kids want alone time with Mom or Dad," Ockun says. She says stepparents can gain a greater sense of inclusion when the stepchildren see that they get it, that they want a close relationship between the children and the biological parent, too.

For the Dunns, that means daddy-daughter time on the weekends, and an annual girls' trip with Zoe to New York City. "It's really nice to have both sets of parents involved in my older daughter's life," Matt says. "Often you hear about one parent being more involved than another. We have her 50 percent of the time, and she's richer because of it. The experience we offer her and the experience she has at her other house, it makes her a richer, well-loved person."