On the Cover: Carolita Johnson 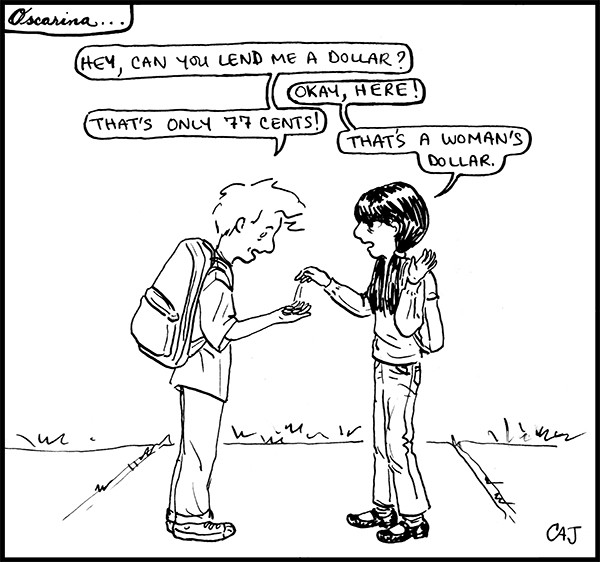 Growing up in Queens, Carolita Johnson was oblivious to everything. Politics existed in the periphery, and drawing was a hobby best executed in Bic pen on computer paper. Now a cartoonist who regularly publishes in the New Yorker, Johnson has graduated to India ink and a Hunt nib on heavy bond paper. "I'm one of those people who buy pads of paper and then I'm afraid to waste them, so I have tons of unused pads! Oscarina gave me a chance to finally use some."

Oscarina, our July cover girl, was born in April 2011. She's Johnson alter-ego, a pissed-off trailblazer bent on destroying the patriarchy with each sharp rebuke. Johnson decided to draw Oscarina as a young girl because she similarly noticed injustices in the world from an early age. It was after living in Paris for 13 years, attending women's studies and sociology courses, that Johnson worked up the nerve to open her mouth and say something. "That's me, I pipe up. All the time. If I were born in a different era, I'd probably be put away, either in a mental hospital or jail, or burned at the stake just for being annoying," says Johnson.

There are no Oscarina cartoons directly addressing what Johnson views as a lax, unsatisfying education system in the US. Education is the substratum of Oscarina; the perpetually scowling, pig-tailed little girl is Johnson's sounding board for sharing what she has learned with the public. A large portion of Oscarina's upset came out of the 2012 presidential election, which Johnson says she found "frightening and disgusting." Oscarina swatted at Republicans and pointed angry fingers in their faces, but was left largely to pulling her pigtails in vexation.

"When something bugs me, or when a funny thought crosses my mind, combine that with time, paper and pen, and you have a cartoon," Johnson says. Humor is a principal component of Oscarina. Johnson believes that "if its funny, people will talk about it, bring it up at the bar, at work, on the bus, and spread the word."

Anvil Gallery at Tech Smiths in Kingston is showing Johnson's favorite Oscarina cartoons, including Dollar, alongside fellow New Yorker cartoonist Michael Crawford's paintings. The show will be exhibited July 11 through September 30. An opening reception is being held on Saturday, July 11 from 6 to 8 pm. Carolita.org