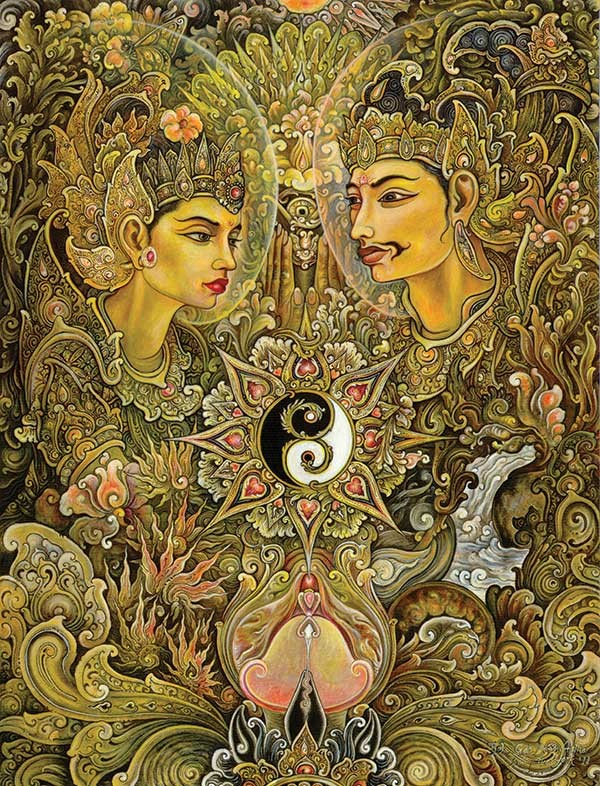 Through the lens of the Hindu-Dharma religion, Tjokorda Gde Arsa Artha explores the yin yang as a symbol of the feminine and masculine, as well as balance and duality. The native Balinese artist's painting Yin Yang draws on the spiritual-based artistic tradition of his homeland, while capturing Western color scheme and perspective. Gde's use of the Balinese figures Predhana (the female) and Purusha (the male)—believed to maintain the universe's equilibrium—emphasizes the marital dynamic. "Keeping happiness and harmony in the cosmic world between man and wife," he says.

Near the bottom of the painting, Gde abstractly represents male and female genitalia, lingham and yoni, respectively. Together, lingham—the phallic emblem—and yoni—the manifestation of power—symbolize the reproductive force of life, especially creativity. "Maintaining the state of the opposing force balances the world," Gde says. "When beauty and love react together, it's completing who we are in the cosmic world."

Balance is Yin Yang's most important theme. For every symbol Gde paints, he offers the opposite force—the image of the two praying hands, the male and female reproductive anatomy, the water and fire imagery. At the very top of the piece, breaking away from his sepia-toned palette, he paints with a deep orange-red to represent the sun. "It's the energy source of all life," Gde says. "We need all the sources from nature to keep stability."

Even though Yin Yang explores complex ideas like love, beauty, and power, Gde's approach—though rooted in his own spirituality—is more human-based than abstract. In describing his work, the artist uses a metaphor of a tree seeing the sun differently from all of its vantage points to express the universality of the human experience. "We're rich of history—one planet, one world, all human," he says. "We all see [the sun] different, [but] the most important thing is that the sun is the same."

Gde's extensive dance background is palpable in his painting style. In Yin Yang, the various textures, detailed shading, and the way the images curl around each other creates an inescapable sense of movement. "It has to be a mimic of motion," he says. "You visualize, express the movement, evoke the energy, and it becomes life."

The Pomona-based artist has work in the private and permanent collections of the Indonesian Government and has exhibited at the Asian American Arts Centre in New York City.

Tjokorda Gde Arsa Artha's paintings will be exhibited at Galley 66 NY in Cold Spring as part of the exhibition "The Sacred Garden," which will be on view until June 16. There will be an artists' reception on April 5 from 6 to 9pm.