On the Cover: Thomas Ruff 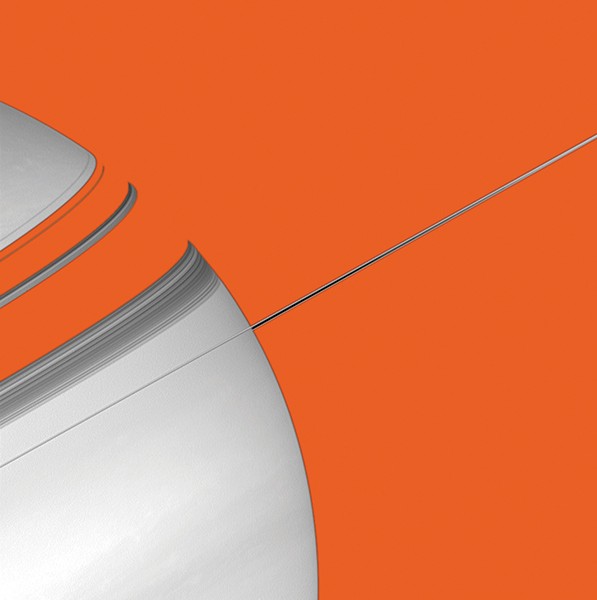 If you've stared at this month's cover shot and questioned your fourth-grade planet-naming abilities, don't. You were right—it is Saturn. But for a moment there, you may have been unsure about German-based photographer Thomas Ruff's image. It has planetary aspects, but the photograph is a bit skewed, and, out of context, may be hard to pinpoint.

And that's exactly what Ruff is going for. The German photographer is best known for his appropriations of existing imagery—from the Internet or pornography, for instance—and manipulating the content so it becomes entirely different from the original. This chromogenic print, cassini 16, was originally snapped by NASA's Cassini-Huygens Spacecraft between 2004 and 2008, and then reimagined in Ruff's more abstract and minimalistic style. To get it to his liking, he printed a large version of the image, brightened it and saturated the colors, blew it up even more to intensify the viewer's experience, and then, finally, cropped it. "When you see it in person, even the pixels begin to show because he's blown it up so large," says Mary-Kay Lombino, the Emily Hargroves Fisher '57 and Richard B. Fisher Curator and Assistant Director for Strategic Planning at the Frances Lehman Loeb Art Center at Vassar College. "It reveals there are limits to technology and the notion of whether or not we can have a true knowledge of the cosmos way down here on Earth."

This entire concept—that innate human desire to know and understand what's beyond our planet—is the central focus for the Loeb's multimedia exhibition "Touch the Sky." With more than 50 works by 18 local, national, and international artists, contemporary art meets science on an astronomical note. The exhibit reflects the campus-wide celebration of the sciences, and the completion and opening of the college's newest building, the Bridge for Laboratory Sciences. "Astronomy is such an old science, it makes you think back on those times, like the Renaissance, when there wasn't such a distinct difference between art and science."

Like Ruff's, Lombino found many of the artists she chose for the exhibit were influenced by the works of NASA. "NASA spacecrafts are known for their amazing ability to capture planets in a variety of physical spectra. We are able to see a lot more in that technology than regular telescopes or the human eye," Lombino says. That quest for observation and interpretation shows through the unique range of the multigenerational artists' work, from Vassar alumna Nancy Graves's 10 lithographs of the moon's surface to photographer Chris McCaw's striking sunburnt images, where he accidentally discovered that the sun's rays can physically change a film when the camera lens is left open and exposed outside overnight.

The exhibit, which runs through August, has a heavier emphasis on black-and-white. Like Ruff, only a few of the artists bring a bit of color to the show. "[Ruff's work] had these vibrant, pop-up colors, which struck me as something that was certainly an artist's interpretation of the skies," says Lombino. "The idea that he could infuse color like that livens up the exhibition."

"Touch the Sky" will be on display through August 21 at the Frances Lehman Loeb Art Center at Vassar College. Fllac.vassar.edu.

Visual Art On the Cover Video

Speaking of On The Cover