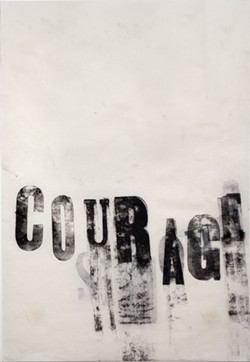 "I think using words that unite people, as opposed to divide, is a positive step to take," says Tatana Kellner during an interview on January 20, inauguration day for Donald Trump, 45th president of the United States. According to Kellner, artistic director of Women's Studio Workshop in Rosendale, art can be a tool to help people have courage, be brave, and stand up for what they believe in. She describes courage as a hopeful and positive word.

Kellner creates installations, drawings, prints, paintings, photography, and books that explore political, economic, environmental, and social justice issues. Her work, as well as work from about a dozen other artists and poets, is on display this month at Vassar in the exhibition "The World After January 20, 2017: Works by Contemporary Artists and Poets," part of the college's annual celebration of 20th- and 21st-century arts, Modfest.

"As a foreigner, I'm very conscious of the power of language," Kellner said. She grew up in Prague and later migrated to the US, settling in Ulster County. Kellner began seriously focusing on art in college, and is influenced by a diverse set of artists such as Francesco Goya, Max Ernst, Mary Cassatt, and Oskar Kokoschka. The tactile quality and human scale of her work reflect these influences.

One of her installations, a 2013 commentary on hydraulic fracturing called Poisoned Well, involved a paper scroll slowly being lowered into a water tank. The paper, on which was written 70 toxic chemicals used in fracking, dissolved in the water, became "saturated muck," and fell to the bottom of the tank. The water was bottled and called "produced water," the term used to describe fracking wastewater. With this type of piece, Kellner hopes to make the invisible visible. "All of this stuff is happening and we have no idea," Kellner says. "We don't see it. And if we don't see it, it must not exist, or it doesn't affect us." Her goal as an artist is to "stop the viewer and divorce them from whatever they are in [mentally], and put them someplace else."

Kellner describes her artistic process as organic. She approaches a piece with an idea in mind, or experiments in her studio until her creativity is piqued. Ideas, origins unknown, can come when she's walking, thinking, or doing something, Kellner says. When her intuition tells her there's nothing more to say about a piece, it's done. It's like knowing you're full when eating, she says.

"The World After January 20, 2017: Works by Contemporary Artists and Poets" will be exhibited February 2 to 16 at the James W. Palmer Gallery at Vassar College in Poughkeepsie. An opening reception will be held on Thursday, February 2, from 5 to 7pm. Vassar.edu. Portfolio: Tatanakellner.com.