On the Cover: Steven Kenny

The elegantly posed and fancifully dressed woman in Winterlude appears to be wearing a fur boa. A closer look reveals a fox with freshly caught prey—a mouse—dangling from its mouth. The woman, adorned with snow-covered whorls of spruce, is seemingly ignorant of this detail. This peculiar arrangement is artist Steven Kenny’s representation of the dysfunctional relationship between humans and nature.

Kenny, a Warwick resident, believes humans tend to focus on the glamorous aspects of nature and ignore its visceral features, like the cycle of life and death. “We turn a blind eye to the things that upset us, but from nature’s point of view they’re just necessary,” says Kenny. “There's something that really bothers us about death. But nature doesn’t distinguish so much between [life and death]. It’s not sentimental the way we are.”

The human figure is fantastically combined with natural elements throughout Kenny’s work. A series of paintings features birds perched on hands transfigured into tree branches. Kenny also often embellishes his subjects with luxurious clothing made from earthy artifacts. The women wear elaborate Victorian gowns composed of rock, cacti, tree trunks, or bark. Prom-style dresses are fabricated from a rain cloud or waterfall. Moss sweaters are ornamented with leaves, mushrooms, and flowers. The figures in his paintings are not only interacting with their environment, but they are also confronted by their own human nature. Kenny makes it evident that although the world may be evolving with technology, human beings are still connected to the Earth.

Kenny’s paintings will be exhibited through February in “Year of the Chimera,” a group show at the Glass Garage Gallery in West Hollywood, California.
Portfolio: www.stevenkenny.com. 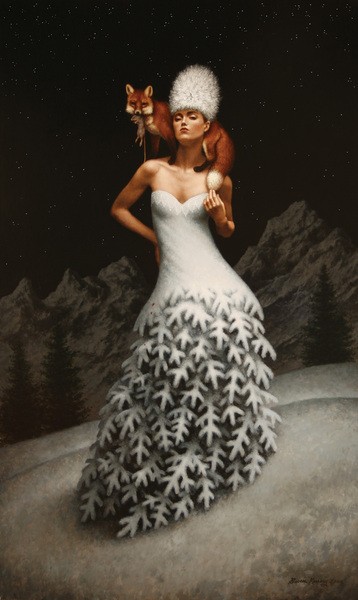