"My work is based on my surroundings, past and present," says Pauline Decarmo in her artist mission statement. "I'm motivated by things that move me, thrill me, and anger me."

There's certainly a lot of the latter motivator coming through in Unholy IV, one of four works in a polyptych by the painter. Which isn't surprising, given the moments in which it was made: Although the painting bears the Roman numeral IV in its title, it was actually the first of the foursome to be created, a reaction by Decarmo to the 2016 presidential election and the inauguration that followed. "I was angry and in disbelief, and I took it out on my canvas," she recounts. "I painted it black, and then I just took a razorblade and for hours and hours I just scratched into it all the words for the different things I was feeling." The three yellow lines rising above the dark dissonance of the background are one of the symbols used by the Black Lives Matter movement, explains Decarmo. "Once the shock [of the election's outcome] had left me a little, I was able to become more playful with my paintings while still making a statement."

The polyptych's remaining abstract images are both playful and caustic, each depicting a smeary-but-familiar porcine figure with an orangey face and an exaggeratedly swept-back combover. In Unholy I, he's a lonely, downcast little boy with a dunce cap and a black cloud hovering nearby; in Unholy II, he's a would-be puppet master whose marionette strings seem to control a yellow egg yolk blob (the sun?); and in Unholy III, he's swinging helplessly by his ankles, Mussolini-style, before a crowd of solemn onlookers. At least that's how this viewer sees them. The artist herself, however, maintains that her works are open to interpretation. "They're allegorical," she says. "They can mean whatever you want them to mean." 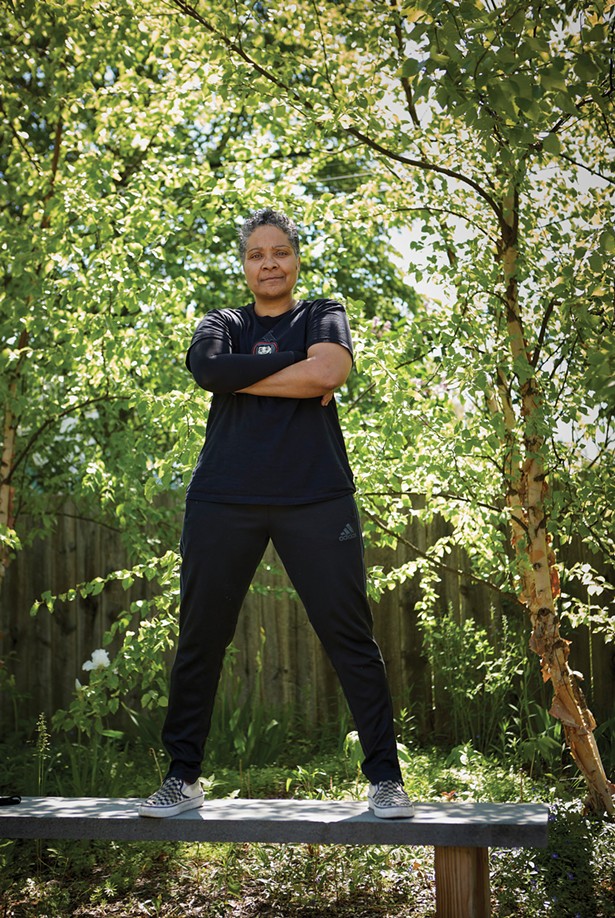 Decarmo was born in Guyana and raised in Jamaica, Queens, by a single mother of eight. "Queens was very tough, I had to get out of there as fast I could," she recalls, adding that she was encouraged by her high school art teacher, studied at Parsons School of Design and CUNY. "I guess some of why my paintings have been dark is because the hard stuff from back then is coming out through them, too. Also, I'm very influenced by a lot of old black-and-white movies and the industrial areas around the places I've lived in."

During the creation of the Unholy series, Decarmo's primary place of residence has been Hudson, where she and her wife, designer and art curator Sherry Jo Williams, have lived since 2011. (The couple also keeps an apartment in Inwood.) All four Unholy paintings are currently for sale and viewable via Hudson Art Fair, an online, guest-curated gallery set up by artists and social entrepreneurs to support charities helping Hudson during the COVID-19 crisis. Although greatly heartened by the mounting demonstrations that have arisen after the police murders of George Floyd, Breona Taylor, and others, Decarmo, a breast cancer survivor with a compromised immune system, has been unable to join the marchers in the streets herself. "I haven't been able to protest in person," she says. "So my job is to show my protesting in my art."