On the Cover: Nadine Robbins 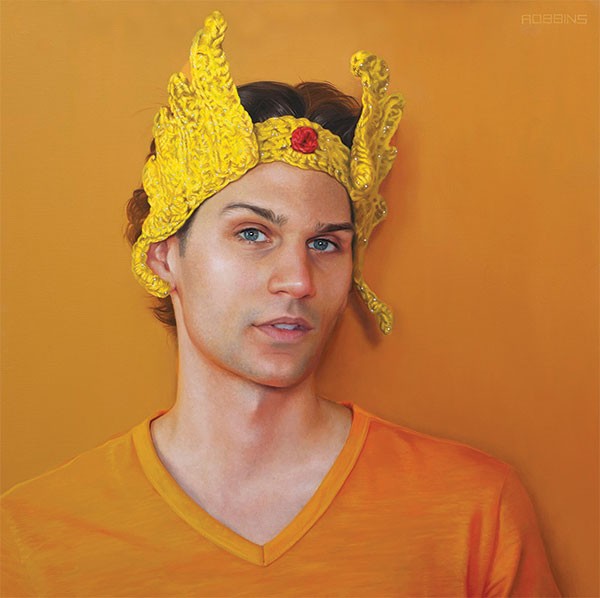 Bad habits and guilty pleasures are the aspects of ourselves that get swept under the rug, those we give shameful yet satisfying attention in solitude. Everyone has a vice, whether we like to admit it or not. Somewhere in New York City there is a dancer noshing donuts during downtime; a model who smokes too much marijuana; and poet Matthew Hittinger donning his She-Ra: Princess of Power crocheted crown to assume his alter ego. Somewhere outside of Rhinebeck, Nadine Robbins is craving a cigarette and maybe reading a romance novel or finishing off a box of Cheez-Its. Frequent indulgence of guilty pleasures should be less embarrassing to admit, Robbins believes. "I'm only human," she says. "I just have to be who I am."

Strikingly accurate, minuscule details in Robbins's paintings convey lifelike aspects of her subjects' personalities, reflections of the contemporary world. Torturously layering the details, getting lost in each painting until perfection, normally takes Robbins upward of 60 hours. Rather than fret over what reaction it will produce in her audience, Robbins' current "Bad Habits and Guilty Pleasures" series focuses on preserving "that moment between a pose and a mistake that captures a person's true essence," in the midst of his or her vices. This moment occurs as Robbins asks her subjects to share sides of themselves that are rarely viewed in public. In the case of Hittinger, the reserved poet opened up to Robbins after putting on his She-Ra crown. By interviewing her subjects while she is photographing them, Robbins is able to translate their regular mannerisms and reactions in an unstaged way.

Robbins is selective when choosing her subjects. "Some people just exude a certain something," says Robbins. This was the case with model Kaitlin Naylor, who posed for Mrs. MacDonald, the painting that prompted the artist to inquire after individuals' bad habits and guilty pleasures. Naylor and Robbins broke for lunch at McDonald's during a photo shoot, and bonded over the greasy, salty fries. Always one for a laugh, Robbins suggested Naylor pose with the fries because "she had that sultry, innocent, 'I'm eating French fries,' kind of look." Exposing the lighthearted side of a guilty pleasure struck a chord in Robbins; she hopes future projects in what she intends to be a 10-to-12 piece series stir up laughs and allow people to examine their own bad habits from a different perspective. Nadinerobbinsart.com.