On The Cover: Molly Rausch 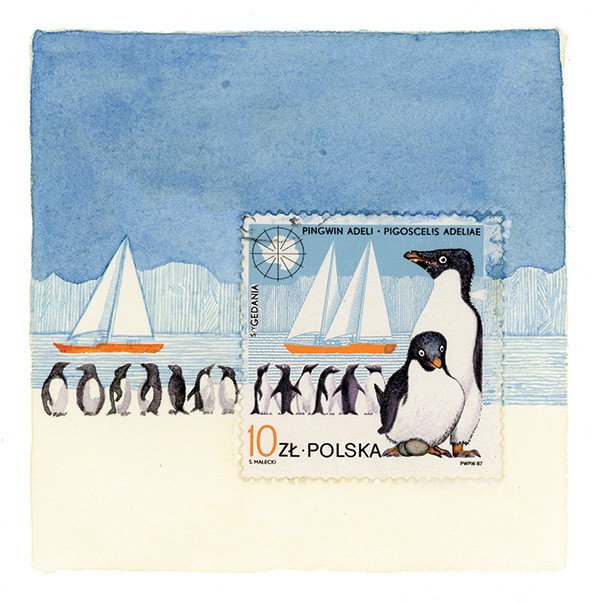 Molly Rausch is a postage stamp artist. Don't misunderstand: She is not in the employ of the United States Postal Service. Rausch uses stamps as a jumping off point for miniature paintings that surround the original image. It's a mischievous mimicry, akin to what children do when they stare at a painting and imagine what's beyond its edges. In Rausch's case, her technical acumen takes the appropriation way beyond mere child's play.

"I'm not a stamp collector," says the New Paltz-based artist, "but the aesthetic of postage—the whole envelope—appeals to me." Stamps also serve as talismans to Rausch. She once sent a proposal for an artist's residency through the mail with stamps from the states the package was to travel through. "I thought it would bring my parcel good luck," she says.

Rausch began working with stamps in 1998, after making a small artist's book by hand. After sketching a drawing on the first page she didn't like, she looked for something to cover the offending image. Rausch had a stamp laying around. "The stamp was just the right size to cover my awful drawing," she says, "and then I just kept going." It was the mistake that launched, according to Rausch, a few hundred paintings (thus far). Rausch works both for her own satisfaction and on commission, with prices for her paintings in the $300 to $450 range.

Though she professes that she's not a philatelist, Rausch is in possession of thousands of stamps, many given to her by admirers of her work, sometimes whole collections at a time. "There's a stamp out there for everything," says Rausch, and her collection of paintings bears this out. There's a Hungarian stamp of a cruise ship and a woman in a bikini; a Parisian street scene painted around the Eiffel Tower; Santa in Anguilla; Christopher Columbus landing in the New World (with a dinosaur approaching in Rausch's painting).

Stamps of paintings by other artists also appear frequently in Rausch's miniatures. Well-known works by Mary Cassatt and Winslow Homer on stamps are faithfully extended.

Rausch claims that she does no research on the stamps she uses, and that the areas outside the paintings are invented from scratch. She points to one piece, the stamp a close-up image of a woman writing with a quill at a table in front of a blood-red curtain. Rausch blows out the scene, continuing the colorful pattern of the quilt covering half of the writing table and envisioning a painting of a sailboat. "She's writing to her boyfriend who's far away," says Rausch. "He's a sailor." She pauses to look at the image. "You construct a little story."

On the Cover of Chronogram: John Cuneo's Watercolor Illustration