On the Cover: Mark Lyon 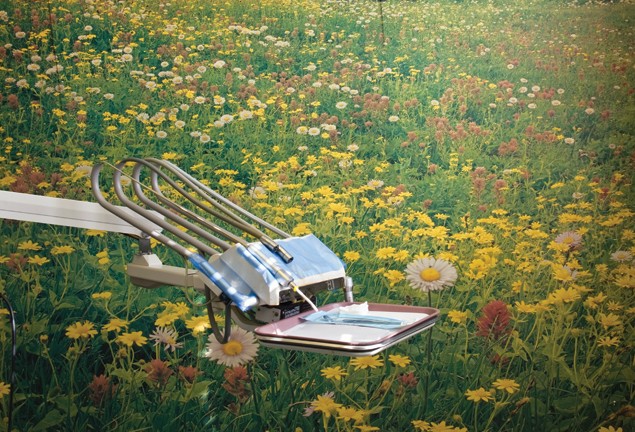 “The fluorescent lights had almost washed out the mural completely. When patients visited the office it had been meant to calm them and now it was washed out—there was an unintentional harmony in that,” Mark Lyon says, describing a dentist’s office he shot for his photography series “Landscapes for the People.” Lyon remembers a birch tree mural in the dentist’s office he went to as a kid, surrounded by the sterile equipment associated with sickness. And it was meant to soothe. But indoors, nature had begun to fade.

This common practice of naturalistic murals became popular amidst the electronical boom of the 1980s and ’90s. Since they have fallen out of style, Lyon expected the series to be small, around 10 photographs. Yet, as the project progressed, he found more and more of these “psychologically soothing” environments. People hearing of Lyon’s search offered places up, or he literally stumbled upon them. Often, Lyon walked into a building after catching a glimpse of a mural through a window or an open door. “Most people think I’m trying to sell them something. It’s taken awhile to learn how to word myself,” he says. Most of the murals have been covered up since he shot them, victims of demolitions or renovations. (Lyon is still looking for scenic wallpaper murals to document and encourages suggestions via his website.)

Lyon says he commonly works on multiple pieces at once and lets them slowly develop over time. A previous series “Wanted”—documenting wanted posters—took him two years to complete to his satisfaction. Since Lyon originally studied painting, his photographs could seem to be birthed from the surrealist movement. Besides “Landscapes for the People,” another series he is currently working on captures cell phone towers that have been masked to look like trees, albeit radioactively enchanced. These massive structures protrude through golf courses, backyards, and developments as if a display in some theme park. And yet another series in progress, “Burn House,” captures firefighters practicing putting out fires on abandoned buildings and cars. In one image a metal frame bed is devoured by flames against a backdrop of charred bedroom walls. Burnt remnants of empty rooms transfigure themselves and appear as fractions of their true size—doll house pieces purposefully placed.

“It’s unintentional Surrealism,” Lyon says. The bizarre psychology behind the practice of why landscape wallpapers were hung to begin with is what intrigues him most about the “Landscapes for the People” series. Drawn to how we use images to psychologically affect us, he tries to make the nonmedical have a medical edge. “Moving something around an inch—that really makes a picture,” Lyon says. Some of the murals he captures are so vivid they are commonly mistaken as being Photoshopped onto the interior wall. “As people start to look closer, they begin seeing tears in the landscapes,” Lyon says. “They start realizing what they’re seeing is something tangible.” The harsh contrast of medical equipment with naturalistic scenery heightens how foreign the objects really are. The juxtaposition is science fiction rather than zen. Instead of the calming benefits societal advancements promised, they’ve become an inward study on the anxiety and alienation of our modern lives.

Mark Lyon’s photography will be displayed as part of “American ReConstruction,” from May 7 through June 12 at the Winkleman Gallery in Chelsea. Portfolio: www.marklyonphotography.com.